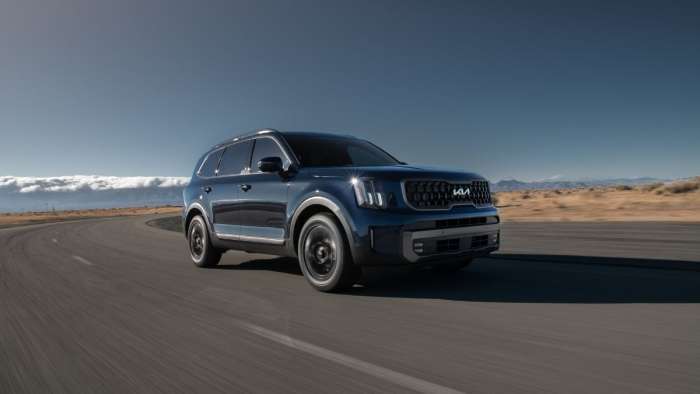 This week Kia released new details about the forthcoming 2023 Telluride mid-size SUV. Technically this will be a mid-cycle refresh for the Telluride, but that didn’t stop Kia from cramming more new features into its star SUV than you can shake an empty sack of road trip snacks at.
Advertisement

Here’s a run down of everything potential buyers have to look forward to from Kia, and at least one they don’t (at least not yet). First, the new trims! For 2023 Kia will offer the X-Line and X-Pro models, both of which have mostly the same feature set, though the X-Pro model’s feature set offers these key differences: an additional 500 pounds of towing capacity (total of 5,500 pounds), exclusive wheels, tires, badging and embossing, and a 110V inverter outlet in the cargo area. 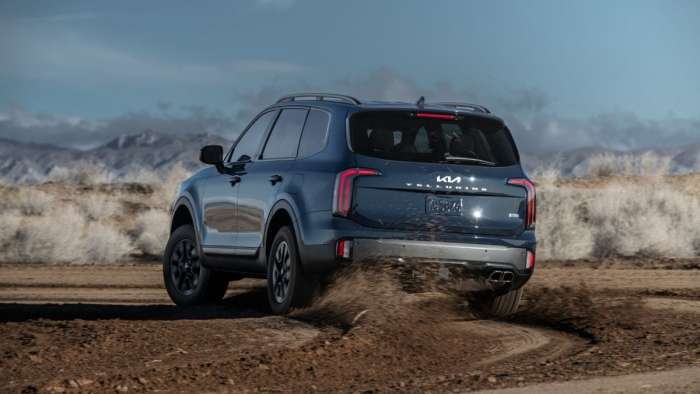 On the outside, the menu of new features is lengthy. These features “bring added ruggedness and capability” via higher ground clearance (only a pinky’s width mind you, at 10mm), raised roof rails, new all-terrain tires, downhill brake control, improved approach and departure angles, a tow mode that optimizes trailering performance, and an upgraded traction control system. There are also three new colors, revised vertical headlights, new bumpers and grille, revised tail lights, rear fascia and trim along with lower door garnish trim and wheel designs that give it a “bold and sophisticated appearance”. 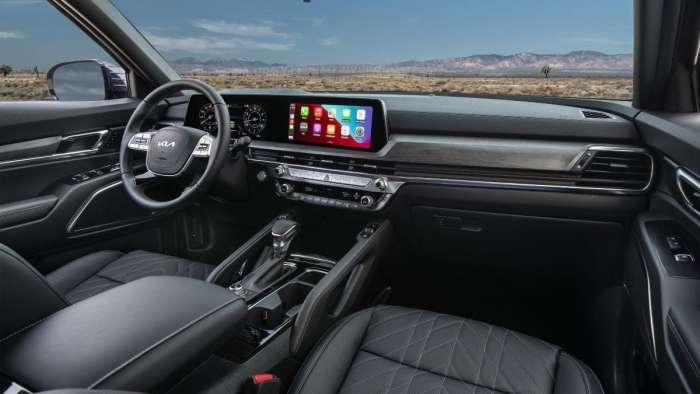 On the inside, there is an even lengthier set of new features that enhance the Telluride’s technological sophistication, safety, design and utility. The dash has been redesigned with revised trim panels and HVAC vents, a new steering wheel, new interior color packages, and a seamless, curved 12.3 inch display. New functionality is provided by in-vehicle Wi-Fi hotspot capability (4G LTE), map and infotainment over-the-air updates, digital key (allowing the sharing of virtual keys to lock, unlock, and drive), the Kia Access App (which allows smartwatches to operate features like remote climate control, door lock/unlock, stolen vehicle tracking, etc.), connected routing (calculates optimal route by using real-time and predicted traffic info) and smart speaker integration (with Amazon Alexa or Google Assistant). There is also an expanded set of Advanced Driving Assistance Systems (ADAS) safety technology with many new safety features, including Intelligent Speed Limit Assist which alerts drivers and limits the speed of the car depending on the settings as well as Forward Collision Avoidance - Junction Turning which detects oncoming vehicles while turning left at an intersection (junction) and if a collision is likely, applies the brakes. Other new or revised safety features include navigation-based Smart Cruise Control (which lowers speed before entering curves), Highway Driving Assist 2 which maintains the distance from leading vehicles and highway lane position while assisting in lane changes, Forward Collision Avoidance - Junction Crossing which detects crossing vehicles while passing through an intersection and can apply the brakes to stop, Forward Collision Avoidance - Lane Change Oncoming which helps prevent collision with oncoming vehicles while passing others via steering input, Forward Collision Avoidance - Lane Change Side which assists in preventing collisions with vehicles in front of the car while changing lanes, Forward Collision Avoidance - Evasive Steering Assist which helps prevent collisions with objects/pedestrian in the front of the car while driving straight. Whew! But still no hybrid version for all those Telly lovers out there that want to inflict a little less damage on their wallets, or the environment.

While that is certainly a lot of detail to take in, what does it all amount to besides a long night cuddled up on the couch with Kia’s manual and a beer, or three? As the owner of a Kia that has many of the same new features, the 2022 Kia Sorento PHEV, I would say that what these features do is offer a somewhat cautious, piecemeal approach to the implementation of a solid level 2 autonomous driving system, or perhaps even a level 2+ system. As the owner of another vehicle with a much better known, perhaps even infamous, autonomous driving system known as “Autopilot” I want to give Kia some well deserved credit. Kia’s ADAS systems (and they really are a suite of interconnected and in some cases separately controlled systems) often perform just as well or better as those I am well acquainted with in my Tesla Model 3. Unfortunately, in some cases I have read about or experienced first hand, Kai’s are also sometimes just as glitchy, or worse. I’ll dive into a more detailed assessment of these features, at least those that are also in my Sorento PHEV, in a forthcoming article. Please share your thoughts about the new Telluride and its feature set below.