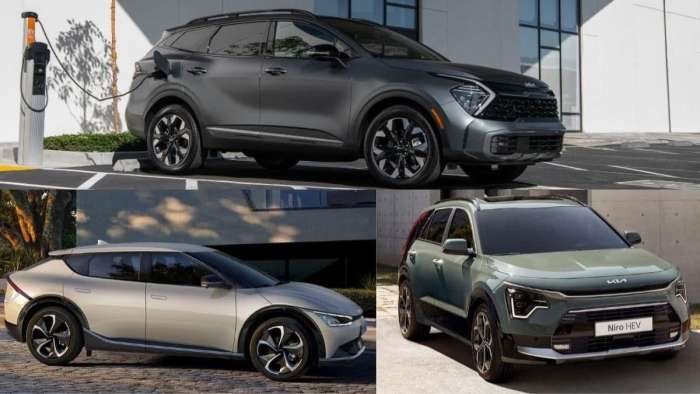 Kia has had another strong sales month in Europe, seeing year over year growth for the month of February of 24.8%. Kia’s corporate sibling, Hyundai, also saw a healthy increase in European market sales of 25.5%.
Advertisement

According to Korea Biz Wire, Kia and Hyundai’s sales surge happened “on the back of the popularity of environment-friendly models”, which would likely include hybrids (HEVs), plug-in hybrids (PHEVs) in addition to electric vehicles (EVs). In fact, of the combined 76,000+ vehicle sales for the two brands last month, about 16% of the total were EV sales. In total, this represents an increase of almost 81% from last February, for the two combined, and is good evidence of the popularity and success of their EV model lines. For Kia, the best selling models were the Ceed (a hatchback/wagon model not available in the U.S.), Sportage, and the Niro. For Hyundai, the Tucson, Kona and i20 (a supermini hatchback not sold in the U.S.) were the best selling models. One more remarkable detail is that this success for Kia and Hyundai is against a 5.4% decline in year over year auto sales for the European market as a whole.

As I have pointed out in a previous article, Kia’s secret to success is their product line. Their success in the face of the generally declining sales, due to pandemic induced supply chain issues and now raw materials supply issues caused by Russia’s war in Ukraine, also has much to do with their ability to quickly source parts and adapt production better than others. Though we could say some of this is also luck (if not strategic), since unlike European manufacturers, Kia is not nearly as reliant on raw materials or parts from Russia or Ukraine. But it is the quality of design and execution in Kia’s models, their appeal to consumers, that is most responsible for their continued sales growth, month after month. Certainly, rising petrol prices in Europe is helping lift electrified vehicles sales there too, but likely lifts all brands simultaneously.

Will Kia be able to keep its sales trend going throughout the year? That depends on many factors of course. I think depending on how next month’s sales go, for example if auto sales in general might decrease further due to drag on the economy from the war in Ukraine, new COVID-19 outbreaks, etc. we might expect things to turn less optimistic for Kia too (at least for the rest of the first half of the year). Longer term, in the second half of the year, sales could also worsen due to impacts from the war which take time to work themselves through the supply chain (since automakers often have weeks or months worth of parts and materials stockpiled). But if Kia manages to keep increasing sales, or match their previous figures, through the first half of the year, there is probably a reasonably good chance the positive trend will continue throughout the year.

What about their U.S. sales trajectory? The spike in gasoline prices will almost certainly lift Kia’s electrified sales here too, assuming they can continue to increase supply accordingly. The accolades both Kia and Hyundai keep racking up will help buoy their sales as well. Later this year, the completely revised and restyled 2023 Niro, and the new Sportage HEV and PHEV models will also support continued upward sales trends. With the ongoing production halt of Chevy’s Bolt EV, the price increases on all Tesla’s vehicles and the slowed production of Ford’s Mustang Mach-E, Kia and Hyundai stand to gain more market share than probably any other mainstream brand on sale in the U.S. (again, assuming they can supply more product) for at least the next few months of sales. Notice I said “mainstream brand” there; I suspect younger brands like Tesla, and startup brands just beginning to spool up their production lines, to see sales rise too. However, with the exception of Tesla, that rise may be more impressive for their % figure rather than their total sales numbers. I actually expect Tesla to lose some market share while continuing to see positive overall total sales growth quarter after quarter. Sales data for Q1 will be coming out in a few weeks, and it should be a very interesting data set to sift through. What do you think will be the biggest takeaways? Leave your comments and questions below.