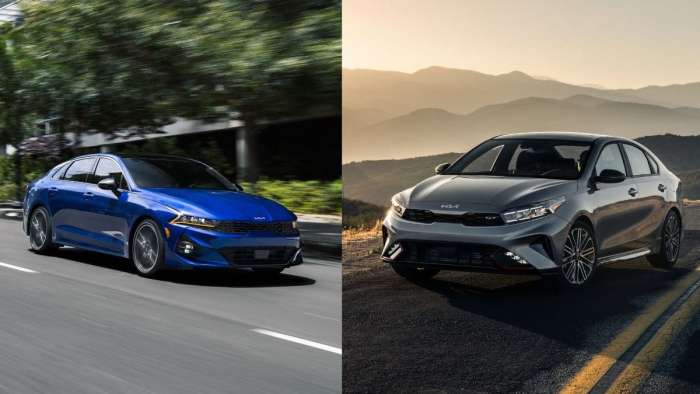 Kia Electrified: HEV sedans may not round out Kia’s U.S. electrification plans, near term

Kia doesn’t offer electrified versions of any of its sedans in the U.S., while sister company Hyundai offers two: the Elantra and the Sonata hybrids. Might this mean that Kia is more likely to hybridize one or more of its sedans for the U.S. market, in the near future? It seems a distinct possibility considering that Hyundai and Kia are tightly coupled and generally share platforms and technology.
Advertisement

Kia’s best selling model in the U.S. in 2021, to date, is the Forte sedan, and its third best selling model is the K5 sedan. The K5 also has the strongest U.S. sales growth in 2021 for any Kia model by a significant margin. For 2022, Kia also plans to increase its total, global, combined sales of electrified vehicles by nearly 50% from their 2021 figures according to Inside EVs. While the 2023 Sportage (Kia’s second best seller in 2021) gets a hybrid option and the 2022 Sorento (Kia’s fifth best seller in 2021) comes in both hybrid and plug-in hybrid (PHEV) options now, those two models’ sales combined with the sales of the Niro and forthcoming EV6 may not be enough for Kia to meet its nearer term sales goals of electrified vehicles for the U.S. market.

If Kia relies on only these 4 known electrified models to meet its U.S. electrified vehicle sales goals, that would mean an increase of several thousands of vehicles spread across the four model types. That is certainly achievable given that the EV6 is likely to be a hot selling EV, the demand for PHEV Sorento outstrips supply (given several months wait reported on social media in various parts of the country), the Sportage HEV will likely meet a receptive audience and the redesigned 2023 Niro should as well. However, Kia may have different sales goals for the U.S. market compared to global sales, for example there may be a higher planned sales increase for the U.S., percentage wise. Depending on what Kia’s goals are and how aggressively they plan to crank out their respective new models, hybrid sedan versions that adopt the same/similar hybrid system Hyundai sedans use seems like an easy path for Kia to follow to meet its near term sales goals.

Not only would adopting the same hybrid drivetrains in its sedans be a straightforward path for Kia, it would play to their value oriented model lineup and allow them to offer lower priced hybrid models that may attract new customers, or better retain existing customers, who may be lured away to other brands offering hybrids at lower price points. An HEV Forte would compete with the Toyota Corolla Hybrid and the Honda Insight Hybrid and an HEV K5 would compete with the Toyota Camry Hybrid and the Honda Accord Hybrid.

If it were not for significant growth in sales of the K5, or the Forte’s number one spot in Kia’s U.S. sales rosters, I would think that Kia would avoid offering HEV versions of these two models. This is because battery supplies are an issue, SUVs are generally a stronger growth market, and offer better profit margins for manufacturers. SUVs and larger vehicles also tend to drag down fleet fuel economy figures more than smaller cars, and for these reasons more electrified SUVs makes sense. Thus, I am not convinced Kia will offer electrified versions of their sedans, yet. It seems reasonable for Kia to be able to increase production of the EV6, Niro (all versions), Sorento HEV and PHEV as well as the HEV Sportage enough to achieve their desired sales increases. But what do you think? Please leave your comments below.