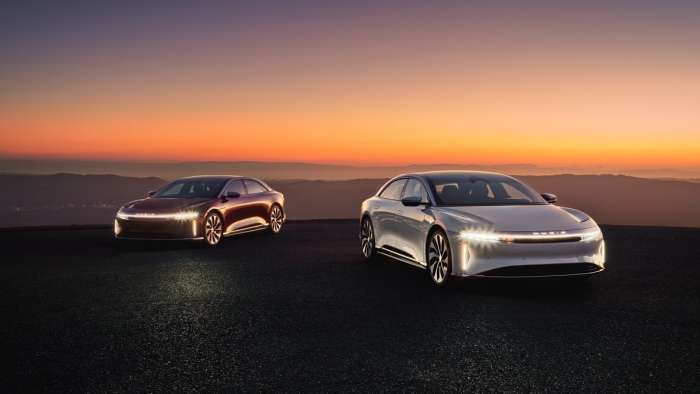 The Kingdom of Saudi Arabia makes up Lucid's second-largest market for Air reservations. Now, customers are being invited to meet the car in person at a pop-up studio in the capital, Riyadh.
Advertisement

In what can only be described as a huge step in the right direction, Lucid is expanding its presence inside the nation that funded a great deal of its growth as a company. The pop-up event, which runs until the end of January 2022, is located inside the high-end Kingdom Tower Mall in the nation's capital city. Lucid's Studio showrooms allow customers to learn about and interact with the company's vehicles through a mix of virtual reality and real-world samples.

Thank you @LucidMotors for the invitation! I can’t wait to see this beauty pic.twitter.com/V3HUTgx3Tx


There are also rumors that customer deliveries within the Kingdom are soon to begin, with invited guest Abdulrahman Albogami disclosing further into the thread:

I’ve also heard there will be some deliveries.


Permanent Footprint
In a further reply, Albogami mentions a conversation that he had with a Lucid employee, who revealed that the manufacturer had leased a pair of locations in Riyadh with one being large enough to operate as a service center for Lucid's vehicles.

Agreed. Also Lucid employee informed me @LucidMotors rented two showrooms in prime locations in Riyadh, and one of them is larger to accommodate a service center. He expects opening of locations before May 2022

Good For Business
Despite Saudi Arabia's oil wealth and current lack of EV infrastructure, it makes sense that this is the first place Lucid would go outside of the US. The Saudi Public Investment Fund holds a majority $26 billion stake in the EV manufacturer, which has already netted the Kingdom a tidy profit and will hopefully serve to move the nation's transport needs away from fossil fuels.

Lucid's vehicles and CEO Peter Rawlinson featured prominently at the Kingdom's Future Investment Initiative Forum in October 2021, playing into the conference's theme of moving away from oil and towards renewable energies.

Vision 2030
Saudi Arabia accounts for half of the vehicle imports of the Gulf Cooperation Council, made up of prominent nations in the area. By 2030 the government hopes to provide 50% of the nation's new vehicle requirements in a manufacturing hub on the west coast, and Lucid may well be poised to exploit a first-mover advantage when this happens.

Lucid plans to open a $3 billion Saudi manufacturing facility akin to its AMP-1 factory in Casa Grande, Arizona by the year 2024. Other automakers will certainly get in on the act and open their own facilities within the Kingdom, but none will be as cozy with the Saudi government as Lucid. With numerous clean energy and EV infrastructure plans in the works, expansion into Saudi Arabia spells a golden opportunity for Lucid Motors.

Cover image by Lucid Motors licensed under CC BY 2.0.