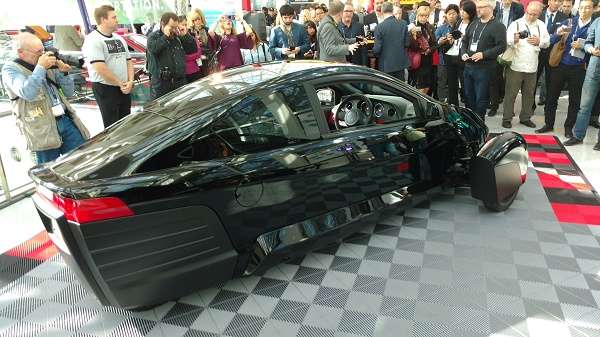 Will Elio Motors pull the production trigger in 2017?

Frankly, I find this 3-wheel transportation startup to be fascinating, as is its very viable 3-wheel personal transportation alternative. But where is it, and why aren't I driving one?
Advertisement

Paul Elio is an interesting fellow. He’s said to be very exacting and cautious in the evolution and eventual production of his under $10,000 transportation brainchild -- now in pre-production development since 2009, not a great year to launch an automotive startup.

I dropped in on Paul and company at the 2016 Los Angeles Auto Show, the 3rd year in a row that I’d view Elio Motors in the “soon to be produced” mode. Frankly, and granted, I’m not privy to all the in and outs of producing a car in the U.S.A. to exacting E.P.A., C.A.R.B and federal safety standards, this compliant 3-wheeled wonder is long in development, or is it?

Speaking with others in attendance, the general consensus of the group of automotive journalist awaiting the breaking news forthcoming from Elio Motors on this sunny and warm Thursday morning in Los Angeles, was that with 63,000 pre-orders on the books, a world-record breaking Crowdfunding campaign, a successful preferred stock option, and now going public,(stock market) why hadn’t Elio Motors put one production car in the hands of an eager consumer. While in L.A. we checked out the all new Honda Civic Si.

Perhaps Paul Elio is going for perfection. That’s cool, but really, I sat inside of what I considered to be perfect, in a enclosed motorcycle-like environment. Truthfully, Elio’s concept has no competition in the auto/ motorcycle industry. Let’s get this car into production.

What Elio Motors tells us

Elio Motors (OTCQX: ELIO), the start-up vehicle manufacturer planning to launch a three-wheel vehicle that will get up to 84 mpg with a set $7,300* base price, today introduced its E1c engineering vehicle at the Los Angeles Auto Show.

The E1c engineering vehicle is a significant step forward as Elio Motors progresses from the prototype to production phase. While the exterior is similar to previous Elio prototypes, the E1c engineering vehicle features foundational and structural improvements to the frame, suspension, and safety systems that will ultimately create a more satisfying driving experience.

The E1c is part of Elio Motors' E-Series vehicles, which are being built for testing and validation purposes. More than 80 percent of the E1c was assembled using soft tooling -- short-term, low-cost production tools -- to prove manufacturability and repeatability of individual parts prior to full production.

"The E1c represents our continued progress along our long-term plan to bring low-cost, highly fuel efficient transportation to the market," said Elio Motors' founder and CEO Paul Elio. "We have assembled an amazing team of engineers and supplier partners who have jumped into every aspect of this vehicle to make sure it meets or exceeds all of our targets. Their passion for creating a game-changing vehicle is one of our company's greatest strengths."

While the company has made hundreds of refinements during the vehicle engineering phase, some of the more impactful changes include the frame, suspension and safety systems with improved comfort and functionality.

The E1c features a unibody frame, which allows for better absorption of energy and greater safety tuning of the vehicle. The unibody frame was developed specifically for Elio Motors by the Elio Motors engineering team, Schwab Industries and Roush Engineering. In addition to the safety benefits, the unibody frame also will improve the production vehicle's fit and finish and will manufacturability.
The modified suspension will sharpen handling and improve aerodynamics, improve long-term vehicle durability and reduce noise, vibration and harshness (NVH).

The E1c is the first Elio Motors vehicle to feature airbags, a key component in Elio Motors' Safety Management System, with two roof-rail side-curtain airbags and a driver airbag in the steering wheel.
"The soft tooling phase is crucial to our long-term success, as we progress from hand-built prototypes to more refined vehicles built with production tooling," said Jeff Johnston, Elio Motors' Vice President of Engineering.

Toyota's First EV Will Have a Name of BZ: Toyota BZ
First Videos From Inside The Boring Company's Las Vegas Loop
END_OF_DOCUMENT_TOKEN_TO_BE_REPLACED