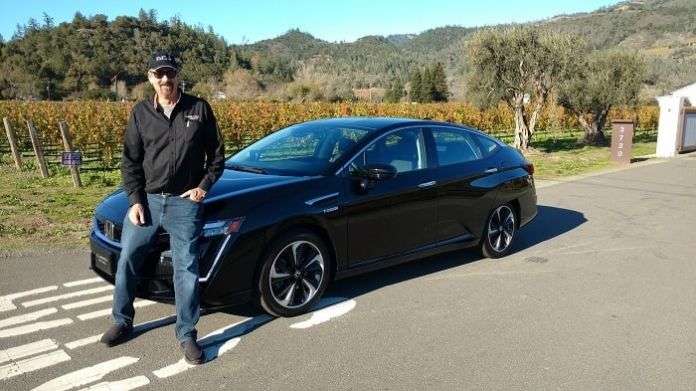 Why I find a viable driving future in 2018 Clarity BEV

While attending Honda’s recent Clarity PHEV press roll-out in Napa, I had the opportunity to drive Honda’s premium Clarity battery electric vehicle. Although the press pans Clarity BEV’s drive range, there’s something outstanding about this EV that few talk about.
Advertisement

Setting the record straight, and there’s no arguing this point, Honda’s latest and largest stand alone battery electric vehicle has the lowest stated range of any current generation BEVs, So why lease one? On my last press trip of 2017 to Napa, California, I experienced two 2018 BEVs, (battery electric vehicles) Honda Clarity, and the reinvented 2nd generation Nissan Leaf. While these cars are as different as white and wheat bread, both offerings are cutting edge when it comes to normalizing the electric car driving experience.

As Clarity brings a near full size sedan to an ever expanding BEV segment, Nissan Leaf opts for a reboot of its ever popular 5 door hatchback configuration. Although Clarity BEV is march larger than Leaf, Leaf comes to market with a more powerful, quicker charging battery module, offering 150 + miles between charging, Clarity doesn’t!

In speaking with Honda engineering while attending the 2018 Clarity PHEV press reveal, Clarity BEV’s short drive range was largely sidestepped. However, it did come to mind that the Clarity world manufacturing platform was maxed out as to long range BEV application. In Other Words, a larger battery module could not be incorporated into the current Clarity design, without reducing the capacity of the trunk, something that Honda’s rightfully proud of.

The general consensus held by the automotive press members interviewed in Napa is that Honda never intended to take Clarity BEV mainstream. That task rests with ClarityPHEV (plugin-electric- hybrid vehicle), and in specific markets, the Clarity fuel cell electric, a stunning compilation of applied physics meets space-age zero emissions, hydrogen fuel cracked, electron generated propulsion. So for me, this gap in Honda’s game plan leaves an opportunity. And, with a bit of range planning, I can make it work on most days.

The most affordable Honda Electric, also happens to be the most dynamic to drive.

Here’s the thing: I’ve drove several pure electric vehicles in 2017, all of them beat Clarity BEV’s stated range between charge cycles. But what the competition doesn’t offer is the near full size cabin accommodation, unique styling, heavy-car ride, and handling dynamics, afford by Clarity BEV. No, Clarity will not take you on an extended across-country- electric highway cruse to grandmothers. Honda’s intent, and they’re rather transparent about this in marketing, is that Clarity BEV is best utilized for intercity commutes, executive car transfer, and urbane crawling.

However, while Clarity BEV is without question refined, well connected, and eerily cabin quiet, when dropped into Sport Mode, Clarity BEV is an electric car street rocket -- it’s very quick off the line, and has stunning grade pulling torque. Driving Clarity BEV becomes second nature within minutes of sitting behind its very smart steering wheel. As to seat comfort, it’s the best in class. You’ll forget your driving electric-don’t. Clarity’s relatively short range demands your attention.

Honda engineering tells us that Clarity BEV finds its market with previous Honda Fit EV owners, about 1100 or so. Looking to Clarity’s lease provision, one can lease Honda’s only remaining pure battery electric for $269 per month, with $1999, due at signing. In California, the initial lease deposit will be offset by the states $2500 rebate. That makes Clarity BEV a very affordable experiment in energy efficient personal transportation.

In driving my own daily routine, Clarity BEV range covers my tracks

Like I said, Clarity BEV is not designed for the long trip. With a stated 89 miles between charges, under ideal weather and road conditions, it would take a bit of charge management to cover most commuters daily work grind. However, for me, and the vast majority of Americans, less than 40 miles per day is traveled between work and home, easily done by Clarity. I can’t overstate the cabin comfort, quiet, standard featured active safety, and personal electronic connectivity integrated into Clarity BEV. I recommend a Clarity BEV test drive to anyone that can live with the 80+ mile charge range.