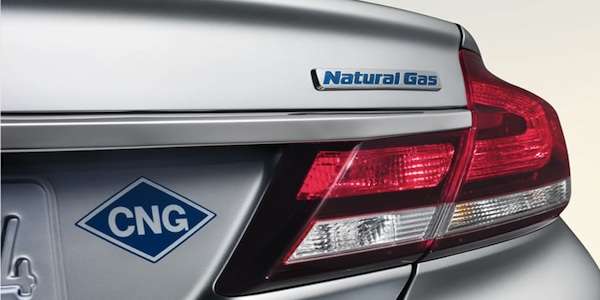 While always a low volume seller, Civic Natural Gas sits on the edge of extinction. With sales reported in the mid triple digits for all of 2013, Torque News looks for an answer or two. What’s really killing Honda Civic Natural Gas sales?
Advertisement

As reported Monday by Forbes.Com, Civic Natural Gas sales have all but dissipated. Never a big seller, according to Forbes and substantiated by Honda’s December sales report, a mere 751 Civic NGs sold in 2014; down from 2198 in 2013. That’s a big hit by any measure.

Will Honda NG go the way of Insight?

Could be, although in the 2015, “Year of Honda” speech, we’re assured that Honda will continue in the development and promotion of natural gas fueled vehicles. So what killed Honda CNG sales in 2014?

Fleet sales are cyclical and often dependent on volume discount, lease incentives, etc. There’s also that price thing. Civic Natural gas is the highest priced Civic in the line-up. While the high price trade-off may be longer engine life, extended service cycles and ease of fueling within one’s company or public infrastructure with a base MSRP of $27,740 and $29,390 for leather, Civic CNG is price $8,300 higher than a comparably equipped Civic LX. You may read full specifications here.

Lower emissions, but less power and torque too.

We reported on Civic Natural Gas back in 2013 and received a very positive response from our readers and a fueling network or two. However, Honda may be way ahead of the curve with Civic NG. Beyond the initial purchase price consideration is a very sparse public fueling network, in-effect stifling most if not all private sector interest. And, with a meaningful drop in the retail price of gasoline, fleet interest in Civic NG falls by the wayside. EV anyone?

We believe that with the further expansion of compressed natural gas public fueling locations, and an uptick in gasoline prices predicted for late 2015, Civic NG sales will increase. And, with sales volume will come a reduction in the retail sales and lease price of Civic Natural Gas.

If you or the company you work for own a Civic Natural Gas, we’d like to read your view at Torque News. How do you like driving Civic NG?