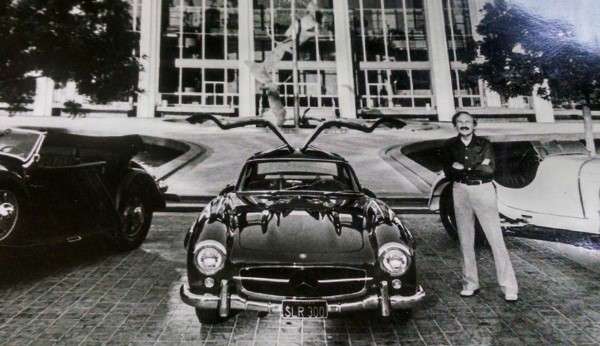 Big Band Director and the original NBC Orchestra founder, Don Ricardo was an avid car collector that leveraged his fame and fortune into what was notably the premier Daimler, Mercedes Benz, Gullwing collection of last century. Don was fascinated with the Gullwing design and held a Delorean or two under cover. His passion was the automobile, and music provided the revenue to support his passion.
Advertisement

It’s one of those life changing moments that at that time, is lost to the ‘busy’ backdrop of everyday commotion and pressing commitment. On an early spring morning back in 1985, I was afforded the opportunity of a car buff’s lifetime; a chance meeting with Don Ricardo and a stroll through what was at the time, a premier, unequaled automobile collection of immeasurable value.

Sitting beneath Ricardo's professionally manicured Pasadena “Old Hollywood” estate, was a subterranean garage housing 20 vintage collectables, most if not all in pristine condition.

As often noted in the Los Angeles Time, Ricardo’s 14 car garage(over-stuffed at the time) and extensive machine shop was as noted by Edmonds.Com columnist Ed Hellwig: Even without its treasures, Ricardo's garage would be the envy of car buffs. Ed Hellwig wrote in a column for the automotive Web site edmunds.com a decade ago that it was "the mother of garages, an inspiration to men throughout the nation . . . a place to pay homage to the automobile."

In the company of Mercedes Benz master mechanic and restoration artist Patrick McCants of Seal Beach, California, I caught a ride in Pat’s current project, a 1958 Mercedes Gullwing Coupe. This original “barn find” was transformed with just over 1,000 hours or restoration time, German black lacquer on red leather and just enough polished aluminum and chrome to catch this avid car buffs undivided attention.

After lifting one’s leg and literally dumping into the passenger seat over a high sidewall and subsequent well(the steering wheel tilts to the side to allow driver seating,) Patrick fired up the 300 SL and we headed up to Ricardo’s Estate in Pasadena.

The rumble of the straight 6 cylinder monster and occasional crunch of a nearly missed gear in arguably a tedious exchange of heavy pedal pressure, and un-synchronized manual took the driver and passenger back to a day of raw torque and questionable drum brake stopping power. None the less, the MBZ 300 SL Gullwing Coupe was and remains a driving adventure like no other. And, with a mere 1400 coupes built, one of the most sought after collectables of a bygone era.

Holder of the world production car speed record of the day(161+mph)The 300 SL was one of the longest legged, low end torque producing monsters of the day. The exhaust tone was unforgettable and thought provoking. The ride? As uncomfortable as a buck-board on a rutted country road in late August, noisy as hell, yet you couldn't get enough of it!

Tech-features back in the day of the 300 SL was a center dashboard mounted analog clock, an interior light or two and oversized drum brakes. While Pat had fitted racing harnesses to the 300 SL, I don’t recall them being a factory option. You’ll have to check with Jay Leno on that question.

Don Ricardo was personable, his hair perfect, and one could eat off of the floor of his subterranean garage. Patrick was in the midst of restoring a pre-World War 2 Mercedes Cabriolet for the Atkins family of Los Angeles. Don, aged in his early 80s at the time had fabricated a part for the project in his personal machine shop.

By today’s horsepower and torque measurements the 300 SL(Sport-Light) barely exceeded the engine output of Honda’s Civic Si. But, it was how the power was delivered. A car of many firsts, including fuel injection, aluminum sub-frame, optional aluminum body,(fewer than 300 built) the SL would set the “mark” for what Mercedes AMG performance has become today.

Looking over Don Ricardo’s collection was life changing as to realizing one’s potential as a ‘serious car’ collector. Although Don was well on his way to dedicating his collection to pre-war Daimler, Benz uber-iron, within the underbelly of his sprawling Pasadena estate rested the finest racing Jaguar, Mercedes SS, and Fiat collections this journalist had closely encountered.

Somewhere within his collection sat two additional 300 SL’s, that was Don Ricardo in his early 80s.

JeffS wrote on April 22, 2015 - 7:33am Permalink
Good Day, Parks. What a terrific experience for a, "Young Buck" to have, (I'm assuming you must have been pretty young at the time). One of those rarified experiences that come too few and far between. Very cool, brought me back to, "Simpler times". I think that's part of what makes our Auto memories such an intricate part of our lives here in the US, it reminds us of the milestones passed along the journey. Thanks for sharing. Be Well, All best.
Parks McCants wrote on April 22, 2015 - 10:41am Permalink
Thanks JeffS. Yes, in diapers! Happy Earth Day.
JeffS wrote on April 22, 2015 - 11:06am Permalink
Have to ask, Patrick, "McCants"? Gotta be more than a coincidence, relation?
Parks McCants wrote on April 22, 2015 - 2:15pm Permalink
Yes Jeff. Younger brother by 13 months. Why, did you know him?
JeffS wrote on April 22, 2015 - 5:38pm Permalink
No, the Last name eventually registered as being the same as yours. Explains a bit about how you got the, "Motor oil" in your veins, apparently it runs in the family. Not meaning to get too personal, but it adds to the article a mite. Shows how cars can be a, "Family affair" and how they can get ingrained into our psyche. For enthusiasts, sometimes the motor memories are tied to that which is so much more than just about a car, as you say, can be ,"Life changing". Essentially, for what amounts to a bucket of bolts, sometimes taking on a life of its own and in the process can change our lives as well.
Parks McCants wrote on April 22, 2015 - 8:44pm Permalink
Well spoken JeffS, and much appreciated.
David b3 Ingram wrote on May 29, 2015 - 1:53am Permalink
i met Don Ricardo in the summer of 1993 at a mexican restaurant in Pasadena near where the 210 freeway begins. I had just walked out of the men's restroom and saw an elderly couple walking toward the front door. I opened the door for them and Mrs. Ricardo smiled and walked past, but Don smiled ear to ear and curtseyed. When he walked out the door, he asked me if I was a musician. At the time I was playing in heavy metal bands and looked like a young Peter Frampton / Ted Nugent hybrid. He asked me what I played. I told him mostly guitar, but bass, drums and piano as well. He told me that he had owned the first electric guitar and asked me what kind of guitar I played. I told him that I had 50 guitars and he told me that cars were his passion. (Quite the understatement) He gave me his card and told me to come by and see his collection sometime. The following week I called him and he invited me over and I went and spent a couple hours in the garage being given an indepth education on fine collectible cars. It was quite a memorable experience and gave me a lot of insight into how collections are built. I have refined my guitar collecting activities based on some of the advice Don gave me, but what impressed me the most about Don was that he was in his mid-80's and was still "So Alive". His car collecting and restoring activities gave him a youthfulness that was incredible. Also, he didn't see a guy with long hair and black leather jacket and just walk by. He engaged me in conversation and when he saw that I was an articulate, sober person, he treated me kindly and after leaving his house that Saturday afternoon, I thought about how most people wouldn't have invited someone who looked like me to check out a 20.6 million dollar collection!! (That's what it was valued at in 1993) I feel truly honored to have met Don and gained insight into his collection and personality. He was a gentleman and a real joy to talk to. When I built my home near Pismo Beach in 2003, I designed it with a 1236 sq. foot garage and thought that Don would have approved. Thanks for letting me share some fond memories of Don Ricardo. He lived life in the fast lane literally and figuratively!! I still don't own a classic car, but my guitar collection has developed very nicely over the years because of some of the advice Don gave me. Happy Motoring, David "b3" Ingram
Parks McCants wrote on May 29, 2015 - 11:30am Permalink
Welcome David. That's what I'm talking about! Don was of the old school. Loved to tell a story and learned from all that he encountered. Hey! enjoy that b-3 Water. And thanks for your welcomed comment. B.T.W., lived in Avila in the early 70s, one of my favorite stretches of coast line in the World. Guitar Shorty?
John Mitchell wrote on August 24, 2015 - 11:20pm Permalink
I recently bought a piano owned by Don Ricardo. I purchased it from the people selling his old home. they bought it after hr died and just sold it really cool piano

LG's New EV Battery Plant Is a Welcome News for Tesla
Tesla Giga Berlin's New Hurdle: It's Not Only the Gov't, but Now Tesla Itself
END_OF_DOCUMENT_TOKEN_TO_BE_REPLACED