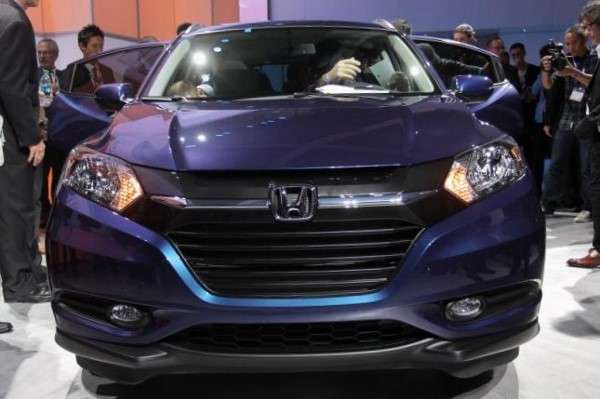 While the headline may border on sensationalism, truly, there is nothing more important to an avid automotive aficionado than accurate specifications. In a world of ‘“hurry up and wait,” new model roll-outs, the rules of the reporting game change like the flow of an incomming tide.
Advertisement

We were reminded on Tuesday by an often commenting reader(we’ll call him Patrick,) that we’re not always dead-on with pricing and specifications. Such is the case with the soon to be released 2016 Honda CR-V. A sub compact crossover that Senior Vice President and General Manager of American Honda Division Jeff Conrad, believes to be Honda’s next big success story.

We do too, but before we get into the if’s whys and butts of HR-Vs successful run for the sub-compact SUV/crossover crown, let’s get back to the problem with “full transparency” when it comes to 2016 HR-V availability date, sales price and specifications.

You see, as automotive journalists, we do a few things very well. #1 on the list: Incite brand-specific- excitement through speculation. #2 Report the facts as presented to us by the manufacturer. # 3 Report first hand experiences and impressions while visually examining a new offering, and hopefully,conducting a long-term drive and review of the subject vehicle.

In the case of 2016 Honda HR-V we've progressed through steps 1&2 while encroaching on ½ of step 3. You may guess what’s missing from the total HR-V disclosure through reading the headline. Case in point: looking to the photo at the masthead of this article, you will find this journalist sitting in the driver's seat 2016 HR-V at the Los Angeles Auto Show. As featured in "Autoweek," we have visual proof of our due diligence when it comes to accurate auto-world reporting.

Granted, while readers such as Patrick and Dave can eloquently argue with this reporter over pending engine specifications and EPA, MPG fuel economy, we as journalist must go to the manufacturer, Wikipedia or competing journalists for unsubstantiated, yet possibly viable hints as to the (final production) engine featured in HR-V; Honda only hints at it!

We do know that HR-V will be equipped with, and we quote Honda,“ A highly refined and responsive 1.8 Liter SOHC 16-valve 4-cylinder engine with 1-VTEC valvetrain,” thank you Jeff. To us, this statement points to an “all new” engine upgrade for HR-V.

From other sources we find verbiage such as, engine is “derived from Civic”, Civic like, low friction, new piston technology, etc. We don’t find a reference to EarthDreams ™ technology as to the specific engine, which we find to counter Honda Motors’ “EarthDreams” mandate of 2011. Where as, Honda Motors vows to ‘standard feature’ EarthDream ™ engine technology throughout the line within 3 years.

Now, the way we see it, either Honda hasn’t met the projected time-line, or, they’re not sharing with the press the full engine specifications for 2016 HR-V. Note: We called EPA, they’re not sharing them either. Or, in the case of HR-V the phrase “ EarthDreams” ™ pertains to the CVT transmission. Sure thing Patrick, we know that’s on board.

When 2016 Honda HR-V is released for dealership sales sometime in March 2015, it will be a unique ‘standout’ in a growing market of fuel efficient sub-compact, SUV-like crossover vehicles. Based on the Honda Fit world-platform, HR-V will retain the interior volume and utility of Fit while injecting a bit of sport-coupe-performance-tendencies, in an affordable, fun to drive, good looking smart urbane transformer. We look forward to driving HR-V in late February.

We believe that Jeff Conrad said it best when he described 2016 Honda HR-V at the Los Angeles Auto Show. And we quote: “The new HR-V crossover is a true segment-busting vehicle, unlike anything else on the market today," said Jeff Conrad, senior vice president American Honda Motor Co., Inc. and general manager of the Honda Division. “It's got all the essential elements of our Honda DNA, our packaging innovation, fuel-efficient powertrain technology, leading safety technology and, above all, Honda quality, to make this an incredibly compelling, sporty and value-packed new member of the Honda family."

We believe when released, 2016 Honda HR-V will meet or surpass most expectations while beating the competition with superior fuel economy, superior drive experience and interior transformability..

Tesla Contemplates A New Strategy for China Retail even As Sales Boom
Jay Leno on Elon Musk & EVs: “I Think He Should Get ... Credit"
END_OF_DOCUMENT_TOKEN_TO_BE_REPLACED