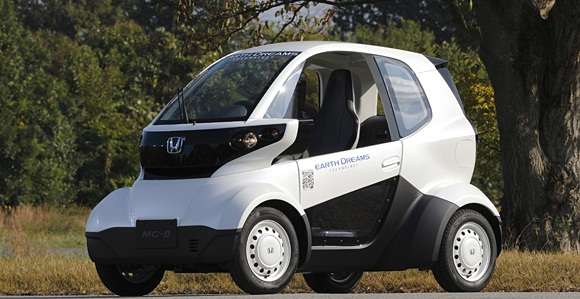 With the cost of import fuels skyrocketing in many regions of the world, budgetary and environmental concern greet Honda’s solar charged MC-8 micro electric vehicle.
Advertisement

Granted, while the day of unlimited solar charged or direct photo-voltaic generated people movers may remain in the not too distant future, Honda of Japan and the City of Miyakojima, in partnership with Toshiba look to the viability of a Co2 free city.

Honda continues to develop new electric motor and battery technology in its quest for greater driven distance between charges. As demonstrated in the 2014 Civic EV and Accord Hybrid, battery charge capacity and technological advances in ‘charge controllers,’ equal greater distance between re-charge or in the case of the Accord, the gasoline engine engagement.

Honda continues to excel in the development of Lithium-Ion Battery Pack development; key to the success of any battery operated electric motor drive system.

We've examined and tested solar panels that continue to generate power after 30 years in service. On the other hand, deep cell storage batteries lose a percentage (10% or more per year) of charge capacity and depend on proper charge and monitoring to extend battery life.

As with all plug-in electric vehicles, the driving range of the MC-8 is restricted by the micro-car’s battery capacity; speed driven and the terrain driven on.

Designed for short distance transportation, the MC-8 may be a very viable solution for the majority of North American commuters. As reported most drive less than 30 miles per day.

Although not yet available in North America, Honda is two years into the testing of the MC-8 concept micro EV... We believe that if the micro-car can be marketed below the retail price of a ‘Smart’ EV, it would be a huge sales success in a city near you.

Mercedes Benz manufactured and marketed a small 4 passenger bubble-top EV through North American dealership groups in the late 1990s. Perfect for small town deliveries and short commuting, Mercedes Benz was a bit ahead of the trend and claimed a loss on each unit produced. Much has changed as to public’s interest in EV and EV Hybrid cars and trucks.

Honda, a company of many firsts is anticipating the integration of alternative energized cars and homes as we move away from oil dependency.

The Japan city owned charging stations in partnership with Toshiba takes a logical step toward achieving zero emissions through the production and promotion of a renewal energy driven personal transportation mode.

We believe that this system could be applied to much of North America.

Looking around Eugene and Portland, Ore., one finds many major roof top mounted photo-voltaic arrays. In Eugene, the largest grid power distributor (EWEB) in Lane County also owns the largest roof mounted solar farm. Eugene is living proof that one not need to live in the Sunbelt, to take advantage of the infinitely renewable energy resource that is the Sun.