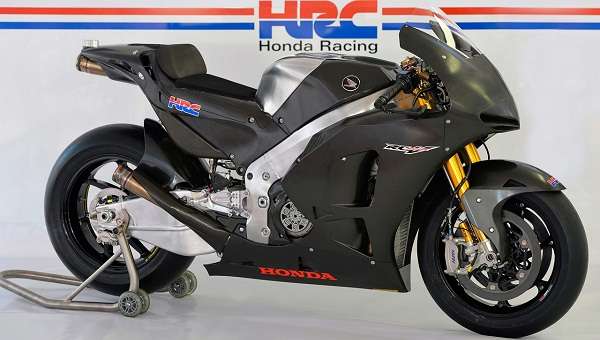 Unless you are one of four racers in the world scheduled to pilot the 'factory prototype' in 2014, you’ll never ride one. The RCV 1000R was unveiled in Valencia on Saturday and has undoubtedly captured the imagination of road and track racers world-wide. The RCV 1000 R is based on the very successful RC 213V prototype and is expected to successfully extend Honda’s point dominance in international MotoGP through 2014.
Advertisement

While Honda has not released full specifications for the prototype, power is stated at 175 kilowatts, or 230+ h.p. @ 16,000 rpm. Weighing in at an ‘estimated’ 420 lbs ( wet,) the bike is a monster. Putting the weight to power ratio into perspective, the imaginary 2014 SEMA concept Civic in your drive would produce 2000 hp. at the rear drive wheel.

According to Casey Stoner of Honda Racing Corporation, Nick Hayden of Ducati fame will be back on a Honda saddle for 2014 and is looking forward to a three day test ride held in Valencia starting Monday. You can find test results here on Torque News later in the week.

For the rest of us, Honda will offer the 2014 CBR1000RR. and RR. SP. While not the same animal as the 90 degree water cooled V 4 RCV 1000 R, this serious street title contender comes out of the box race ready with fully adjustable inverted Olins front and rear suspension, 320 MM dual Brombo’s and Pirelli Diablo Supercorsa 17s. To date, Honda hasn't released the MSRP or specifications for the SP, but the CBR1000RR. lists a suggested MSRP of $13999.00 U.S..

I doubt that the SP will cross over into Ducati price territory, and should be a relative bargain for the street fighter that requires the best in metric engineering and reliability while keeping a few bucks in his or her leather pocket.

Based on a race proven platform, the DOHC 16 Valve inline 4 tied to a close ratio 6 speed will carry forward the tradition of cutting edge performance and reliability expected by die-hard Honda owners. look for CBR1000RR and SP dealership availability in early 2014.

Bottom line: In my opinion,( yes, I have one,) although I've owned and ridden motorcycles from all the major manufacturers; and a few of the minor ones, the Honda performance line presents great value in sport and street performance motorcycles. Honda, the world's largest motorcycle manufacture since 1949, carries on the tradition of quality and reliability throughout the entire CBR line. Virtually bulletproof and infinitely rebuildable and modifiable; literally and figuratively, the Honda Motorsports line is tough to beat.

LG's New EV Battery Plant Is a Welcome News for Tesla
Tesla Giga Berlin's New Hurdle: It's Not Only the Gov't, but Now Tesla Itself
END_OF_DOCUMENT_TOKEN_TO_BE_REPLACED