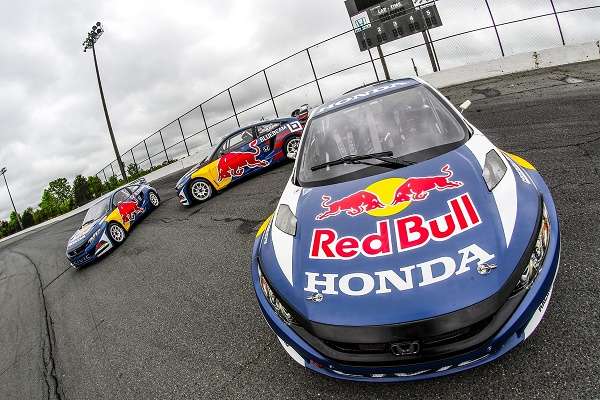 Ran on a very short, closed course, comprised of dirt, gravel, pavement and the occasional high speed dirt-mound enabled aerial jump, GRC is more akin to stadium motocross, than track or off-road rally racing -- it’s a kick to watch, and even more fun to drive. 2016 GRC finished the season in the Port of Los Angeles.

Meet the drivers: *For the returning Swede, Sebastian Eriksson, his No. 93 Honda Civic Coupe pays homage to the traditional OMSE livery, the fast and thrilling navy-blue and ghost-white scheme. For the 18-year-old Swedish rookie Oliver Eriksson (no relation), the No. 16 screams aggression. The navy-blue design features an abundance of attacking stripes imbedded throughout the car, highlighting Eriksson's creativity and determination on and off the track. For the No. 24 of Temecula, Calif. native Mitchell deJong, patriotism and passion highlight his new livery. Stars and stripes line each side of the Civic, paying tribute to Honda's first American Rallycross driver.

Oliver Eriksson (No. 16 Honda Red Bull OMSE Civic): "These liveries are lit. We are the biggest team in Red Bull GRC and we represent the best sponsors in the sport [Red Bull, Honda, Bluebeam. Motegi Racing, KN Filters, Bell Helmets, BF Goodrich] and now, I think, we have the best liveries as well."

Mitchell deJong (No. 24 Honda Red Bull OMSE Civic): "When I first saw the designs I got really excited. For one, I get to have the Stars and Stripes on my Red Bull Honda. I love my country and I also love this team; the fact that I get to drive this cool car just motivates me even more."

Sebastian Eriksson (No. 93 Honda Red Bull OMSE Civic): "I enjoyed my car design last year, and I enjoy it even more this year. The blue is a bit darker which is refreshing. It makes it look faster and the lines on the back are sharper, which I think also makes it more aggressive." 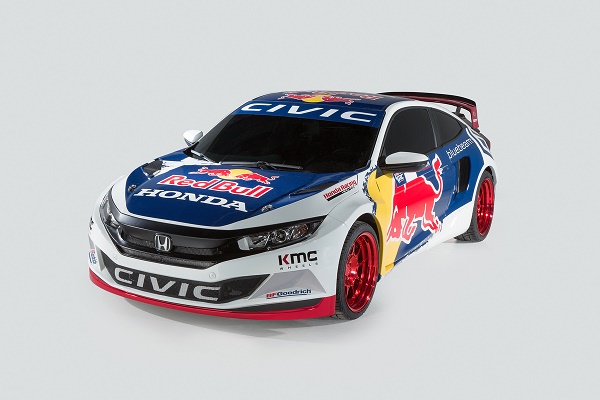 The Honda Racing trio of S. Eriksson, O. Eriksson and DeJong will pilot their 2017 Honda GRC Civic Coupes in Memphis on Friday and Saturday. Qualifying coverage for the first event of the season begins Saturday night at midnight ET/ 9 p.m. PT on NBCSN, with the finals airing Sunday, April 30 on NBC at 1 p.m. ET / 10 a.m. PT. * American Honda Motors 2017.

fatbloke wrote on May 6, 2017 - 4:02am Permalink
Look out America, just seen a trailer full of Civic Type R's heading for the docks, happy days!