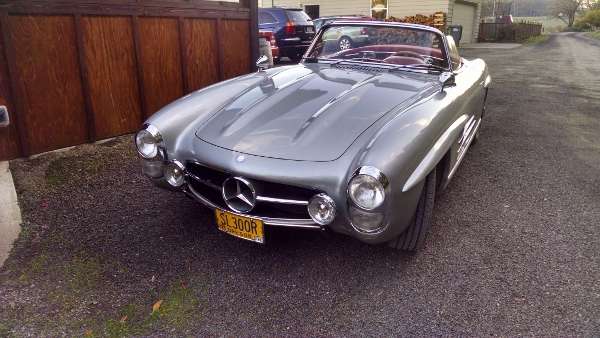 Discovering one of my personal favorites parked next to Sarver’s tasting room made this car-nuts Saturday. Now, it it real?
Advertisement

So, assuming that what sat before me in silver, on beautiful, slightly worn red leather was the genuine article, its owner, John Hiron of Eugene, Oregon, just drove a very pricey 300SL Roadster up a long gravel driveway. According to Chris Sarver, Mr. Hiron drives the vintage SL on a weekly if not a daily basis. Well, John is reported to be well heeled, but a million dollars in the gravel? That’s a bit of a stretch for this vintage Mercedes enthusiasts.

John Hiron wasn’t available for comment. So, in my usual cautious, but auto-journalist evasive style, I took this auspicious and very rare occasion to poke around the 300 SL just a bit. First things first, I conducted my knuckle rapping fiberglass test. Then, searching for any concerned onlookers, I reached under the lip of a front fender well and examined the metal-fold above the suspiciously late-model radial tire. I’ve driven just two Vintage 300 SLs in my lifetime, one a 1958 fully restored Gullwing, the other a band find Roadster. If I had listened to the engine running, I could easily differentiate the real-deal from a very cool replicar. There's no mistaking the world’s first fuel injected production car’s engine note for any other car on the planet.

At this point I was just a bit puzzled. The roadster's body felt like steel, and yet while examining the 2-seat roadster, a part or two, as well as the historically correct headlamp housings had gone missing. Granted, I’d shaved a bumper or two in my custom car days, but this was a 300 SL Roadster, you didn’t mess with the authenticity of this vintage tin. And, if you were missing a part or two, you would search until you located one. However, in true racing form, it was not unusual to find a 300 SL running without bumpers.

Strangely enough the seat leather, windshield trim, door pulls and side mirrors all showed historically correct wear. But, while looking to the tail section of the mighty Mercedes, the world's-first fuel injected production car, I discovered the tail-tell evidence of a modern 3 inch stainless steel exhaust tip. Again, this could have been a very careful upgrade, or, an extremely well executed early replica. I’m going with the later. Take a look at the photos of the 300 SL and get back to me at Torque News, as to what you believe we have here; a fantastically restored original blasting down the rural 2-lane roads of Lane County Oregon, or a well executed reproduction? Your thought provoking comments are always welcome here.