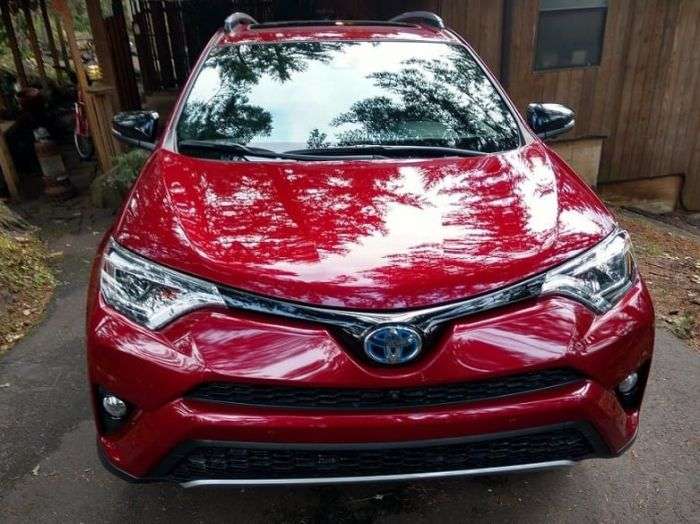 2018 Toyota presents a RAV4 that currently sets the bar for all compact 2-row Hybrid SUVs to follow, it’s that good. But there’s much more to this hybrid than initially meets the eye. This Hybrid family hauler has a sporting side.
Advertisement

Truthfully, I wasn’t expecting to be impressed by a Toyota Rav-4 of any variant. But I must admit, as much as I’d like to dismiss RAV4 Hybrid as a limited edition passing phase, I can’t ignore what Toyota’s most refined compact 2-row crossover brings to a segment dominated by sport-sedan-want to be’s. For me, and other compact crossover, SUV drivers, 2018 Toyota RAV4 blurs the line between sport, and low impact fuel efficiency.

The fastest growing SUV segment in North America just happens to be compact, 2-row, and largely economical to purchase and operate. As an automotive journalist, I’ve driven most if not all of the competing brands in the compact class. I now tip my hat to Toyota for refining RAV4 Hybrid to the point of quite possibly leading the compact crossover SUV segment in fuel efficiency, and, on-tap electric-enabled sport-like drive characteristics. Torque News Toyota expert John Goreham takes a closer look at future of Toyota RAV4.

Where Toyota RAV4 Hybrid truly shines is while maneuvering in the city. Our fully optioned 2018 Toyota RAV4 SE Hybrid realized a real-world in-city fuel efficiency of 29.2 MPG. We didn’t baby RAV4 Hybrid during our week behind the wheel, and discovered a surprisingly “sporty” crossover, with multiple personalities.

If I were to compress my “like” list down to 2, I’d point to RAV4 Hybrid’s on-tap instant-on “sport” mode, and outstanding overall fuel efficiency. This in itself is enough to place RAV4 at the top of any hybrid-lover’s test drive list.

March can be a tough Winter month in Western Oregon, and this year was no exception. Driving well over 1000 miles through rain, sleet, snow, truck worn highway, and backcountry two-lane-sweep, our RAV4 test sled trudged on effortlessly , while we rode in heated, relatively quiet, and rough pavement-taming comfort. One could expect RAV4 Hybrid’s fuel efficiency to drop measurably on the open road -- it doesn’t. We realized 30+ MPG average, while driving 4 days through tough Winter weather conditions.

Frankly, I like the electric side of 2018 Toyota RAV4

Granted, in today’s world of plentiful and affordable gasoline, many consumer will opt for the initially less expensive to purchase LE or LXE RAV4 trim package. A non hybrid, relatively well equipped FWD RAV4 comes to market with a beginning MSRP of $24,520, plus delivery,, dealership, prep, taxes, options, etc. For those of you that look for greater power and fuel efficiency, RAV4 Hybrid may fit the ticket.

It took me a day or two to discover 2018 RAV4 Hybrids sport potential. Frankly, I was so intent on squeezing every last mile per gallon out of it, that I missed the standard featured 3-mode drive select. Yes, Toyota’s “Greenest” 2-row SUV does have a formidable performance side. With the flip of the dial, one can chose between Eco, Normal and Sport driving modes. Also, you’ll note an occasional electric-only drive experience when coming off of a complete stop.

There is no transmission, per say. And that does take a bit of getting used to. But once you attune yourself to the peculiarities of the Hybrid gasoline/electric drivetrain, driving RAV4 Hybrid becomes second nature, comfortable, and dare I say it, fun. With no shortage of competition in the 2-row compact SUV segment, I recommend a test drive comparison between Honda CRV, Nissan Rogue, and Toyota RAV4. The latter takes the lead in the Hybrid competition, it’s that good.