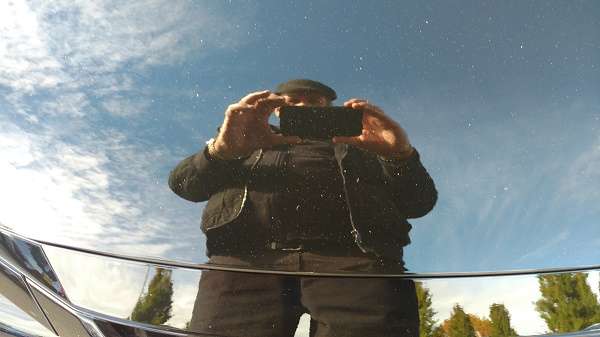 Undoubtedly, 2017 Honda Civic Hatchback is Honda’s greatest compact car manifested to date. It’s surprisingly refined and comfortable. I just took one out for romp and am just a bit blown away by how good this Civic truly is.
Advertisement

I’m one of those Honda fans that looks back to the glory days of 3-door sub compact Civic Hatchback supremacy, as the benchmark of every competitive brand import hatchback to follow. And frankly, due to a consumer demand for a larger, safer, and greater technologically advanced hatchback, those glory days are gone forever, in the U.S. anyway. As is the simplicity and ease of sub compact car maneuverability that vacated the North American auto industry sometime back in the 2006, with the exit of the sub compact Civic Hatchback, or is it?

Argue as you will as to 3-door hatchback, and all-wheel-drive supremacy, dealt with an industry-wide blow at the hands of Subaru and others; in a segment left largely behind by consumers via the crossover. All lost in the quest for a higher seating position, and greater hatchback utility. 2017 Honda Civic answers the call for “more,” sans all-wheel-drive, in spades!

This Civic Hatch visual, sensory experience is one of surprising excellence

Seriously, is this a Honda Civic? Entering the rather posh confines of the manufactured in England Honda Civic Hatchback, I’m just a bit blown away by how spacious and well laid out Honda’s latest Civic variant is. This 5-door hatchback is huge by compact car standards, yet balanced in proportion. While not a fan of the jet-engine-air-intake look, the body design does grow on you, as proportion meets functionality at every turn. Hey! I like the 17 inch alloy rim design, continental tires and black pearl paint. And, like the coupe and sedan, 2017 Civic’s proportions and comfort encroaches on the the midsize car class -- with a surprisingly large drop-in cockpit like environment -- in this application, complete with 8-way power adjusted heated driver’s seat, a quality leather clad and heated one at that. Don't want a hatchback, check out the sedan.

Historically, I personally have a hip, leg and lower back issue with Honda Civic seats, not here! This may be the best built, comfortable seat in the Civic livery. Looking to the dash, center-stack and center console layout, one discovers a ‘crisp.” succinct, and dare I say it, near intuitive driver to car interface.

Also, the view forward and rear is largely unobstructed -- the seating height is good -- as is head , hip and shoulder room, front and rear. I further appreciate Honda’s standard backup camera and right side "Lanewatch." *I now believe that all maker’s should include this safety feature as standard equipment, that’s just me. On a side note, I found the climate control, defrost mode, power windows, 8-way power adjusted driver’s seat and heated side mirrors to work flawlessly. The sound system in the EX-L model is heads and shoulders above standard equipment found in competing rides -- as is the quality of the interior finish, superior! There is no cost-cutting 'cheep' to be found in this Civic hatchback.

Every accouterment found in this Civic is in it’s proper place with ease of access, a physical knob where needed, and what seems on first drive to be infinite adjust-ability -- as to graphic gauge and touch-screen monitor layout. * Forgive me, I didn’t pair my cell phone to it! So, I won’t comment on Infotainment connectivity. As with all modern cars, there’s a bit of redundancy present as to smart-wheel-control overlap, but not much. Unfortunately, you won’t find wheel mounted paddle shifting here, that’s been reserved for the Civic Si and Type-R variant.

Nonetheless, the rather well mannered CVT works very well, and does come equipped with a center console located select-shift “sport” and low range, along with a very slick storage cubby and cup holders. Note: I did find “S” useful in aggressive corner carving. And, surprisingly enough, 2017 Honda Civic Hatchback is the best handling offering in the 3 variant lineup -- coupe, sedan and hatchback.

The Brits built this one right!

One doesn’t generally find this level of visual and sensory (touch) quality in a compact car priced under $30,000. * Our 2017 EX-L Navi Civic Hatchback prices out at MSRP $26,135 including destination. Nor, was I anticipating what followed as to on-tap seamless power transfer via what is arguably the tamest constant variable transmission in the industry, (CVT) and Honda’s 1.5 Liter, fuel injected, turbocharged VTEC 4 cylinder gasoline engine. With that disclosure out of the way, how’s the drive?

Alrighty then: Granted, the day that I ventured out to Kendal Honda, Eugene, and coaxed my buddy Paul out of a romp in a just off the truck, zero-miles 2017 Honda Civic EX-L Navi, I’d just spent the week driving a Mazda MX-5 Miata.

To say the least the Civic hatchback felt like a Cadillac Denali in comparison to the Miata. (a great little car by the way) So mentally switching gears, I dropped into what I believe to be Honda’s greatest Civic re-work to date; with suspension and ride quality rivaling anything available in today’s compact car class.

Personally, I like the utility and look of a hatchback, it just makes sense for most of us. In the balance of the world, a hatchback does double duty as the family utility vehicle. While I’m confident that one could hall most daily-life items in the back of Honda’s latest hatchback, I looked to this European inspired 5 door for reasonable road performance, And I found it!

What’s just a bit of a mind-blower here for me, is how refined and agile this Civic truly is. It transitions onto the highway with throttle to spare. (No turbo lag noted) And thanks to the freight-train-like on demand, “drive-by-wire,” torque, that transition is rather seamless.

As to the suspension and quality of ride, the historically stiff Honda Civic ride is gone, replaced by a rather civilized, controlled float, with minimal to ZERO side roll noted. Seriously, this is the most refined Civic offering I’ve ever driven. Built on the same world-compact-platform as 10th generation Civic coupe and sedan, this hatchback comes to a segment that at one time ran on compromise as to interior comfort and performance, no more.

Granted, my drive-time was short. So, I transitioned from surface street to highway on-ramp, back to stop and go traffic. You, know, your everyday commute! What I discovered is a 5 door hatchback with a starting MSRP under $20,000, that is comfortable, reasonably quiet, and rather seamless as to all those conveniences, connectivity and active safety features demanded by discerning drivers today.

In the sum total that is 2017 Honda Civic, Honda hits yet another home run in the North American car game -- 40/60 rear split seat and hatchback thrown in as a bonus -- this car as priced is a mild performance bargain.

O.K., this is not a Honda advertisement. So what would I change? Not much! But frankly, I’m not a big fan of the rather edgy jet-air-intake look of the front and rear lower cowling. Truthfully, as to function, they don’t do anything. My friends at Honda tell me that the kids like it -- I’m not a kid. And, as with all compact cars riding on low-wall all-weather performance tires, 2017 Honda Civic Hatchback could be a tad quieter on the interior, as to road transfer (tire tread) noise transference to the cabin -- but it’s more than acceptable. That’s it! But, don’t let these two very minor personal observances dissuade you from test driving Honda’s greatest Civic advent to date. At the end of the day, I consider this hatchback when weighed against the competition to be a screaming, multi task capable, drive and ride measurable performance purchase bargain.