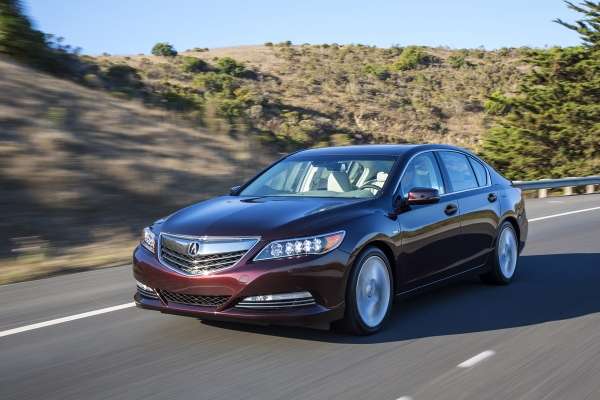 I was introduced to Acura’s flagship sedan back in August of 2014, and was immediately hooked. However, the RLX Sport Hybrid failed to materialize in the U.S. for 2015. Acura’s shipping 2016s, but where are they?
Advertisement

Granted, I’m an unabashed Acura fan and have been since the 1980s. Back then I had the opportunity to take the wheel of NSX more than once, in fact I owned one for a year. That was all it took to sign me up for life. Acura’s had its share of missteps along the way, what automotive manufacturer hasn’t?

Yet Acura has arguably manufactured and imported some pretty damned exciting sports sedans to the U.S., and in recent years, has landed on its feet as a domestic manufacturer of the best selling SUV in the western hemisphere. I like Acura, and it shows in my drive reviews, there’s no hiding that fact.

Today the majority of Acura offerings are manufactured in the United States, with the exception of the missing in action 2015, and now 2016 Acura RLX Sport Hybrid. Interestingly enough, American Honda has sent Accord Hybrid packing for Japan, but I’ll hold that for another article.

I, like other Acura diehards, find this ghost sport hybrid to be a bit perplexing, and perhaps just a bit counter to Acura’s mission; one of timely, well crafted performance and stellar customer service.

In my view, one if not the best crafted performance values in midsize premium automotives comes from Acura, and I’m personally looking to 2016 RLX Sport Hybrid, when, and if it arrives, to be a car of near handbuilt quality and unrivaled top of segment performance.

Allow me to digress just a bit here. My contacts at American Honda Acura Division insure me that in fact, 2016 Acura RLX sport Hybrid should have arrived at Acura dealers sometime the week of May 3, 2016, yet, we’ve had no luck locating one in dealer stock in the U.S..

O.K., perhaps 2016 RLX Sport Hybrid is delayed in transit, stuck in customs, or? I give Acura until the end of May before I suspect something amiss in Acura’s promised stateside delivery.

Throw 30 + highway mpg into the added value quantifier and no other brand competing in the full size luxury sedan arena can touch Acura Hybrid performance; but it must show up to the party to compete.

Self driving, yes-when called for

While driving 2015 Acura RLX Advance, featuring precision all-wheel-steer, I experienced for the first time Acura’s advanced accident prevention technologies. You may read about that experience here. For 2016 Acura kicks the tech up a notch by offering arguably the most advanced ride stability, brake distribution, mitigation and accident prevention soft and hardware in the automotive industry today; but you’ll pay for it.

Priced from $55,950 to $65,950, Acura RLX Sport Hybrid takes the maker into uncharted territory; perhaps the availability delay is a market timing move based on the U.S. economy uptick, perhaps.

When 2016 Acura RLX Sport Hybrid finally lands on you neighborhood Acura dealers showroom floor, it will be the highest priced performance sedan in Acura’s history. And, will hold the high water mark until NSX Hybrid arrives on the scene.

Still, when compared to the competition, Acura RLX in any trim variant is a relative luxury car bargain. And that of course is why buyers are waiting in line to buy one. The question remains, when, and will the performance luxury sedan market pay upwards of $70,000 with fees, sales tax and license for Acura’s astounding flagship?

Sitting in the driver’s seat of the lone remaining 2014 white pearl on parchment leather 2014 RLX Hybrid located in the Pacific Northwest today, I was reminded of what a fine piece of near handcrafted performer this car truly is. I’d personally put it up against any other premium ride in the industry today. Dear Acura, please give me a call when the 2016 RLX Hybrid makes it off of the boat, I wish to drive it!