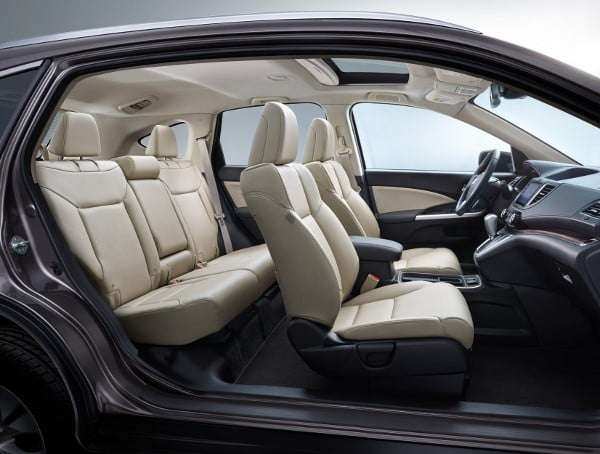 Now that the smoke has cleared from Tuesday’s mudslide of CR-V reviews, we can get onto business. We believe that 2015 CR-V offers best in class interior comfort and utility.
Advertisement

Our Wednesday morning inbox and comment thread was filled with CR-V chatter. Without a doubt, the Honda loyal are taken by CR-Vs most recent manifestation, although it be a mild re-do; so the detractors would have you believe.

Without driving the latest CR-V incarnation a comment from a detractor is as baseless as pond water. One can’t measure the improvement of CR-V without making a side-by side comparison to the competition or driving the 2014 model.

We can state without reservation that Honda has taken a step in the right direction as to making the number one selling SUV in North America better, without appreciably increasing the price tag.

You can read about CR-Vs engine and transmission updates here. Today we’re focusing on the interior.

Nothing is more important to a serious driver than the driver’s seat. Honda has not only upgraded the fabrics utilized in the LX, EX and EX-L seat trims, they've created a driver’s seat of quality, firm yet adjustable construction that will last the stated life of the vehicle.

On the high end(EX-L optional and Touring) one will discover the comfort afforded the driver by a 10 way power adjusted, heated, perforated leather seating area covered pilots seat. One would be hard pressed to find a better quality seat mounted on the floor of a 2015 TLX, it’s that good.

I had the pleasure of sitting shotgun for the portion of our Surf City, CR-V drive and review. While my co-driver was aggressively testing CR-V braking and turning stability, I experienced no loss of seating position in CR-Vs front passenger seat. At 6’ 5” I experienced minimum to no knee, dashboard contact. Hip, elbow and shoulder room was way above average for the small SUV segment as was headroom. Impressive!

Honda has raised the bar on interior finish quality, fabrics, molded plastics and soft surfaces. Granted, we were driving the top of the line $32,700 msrp Touring edition. However, the carpeting, headliner, door surfaces, moldings and leather seat stitching held a visual high end standard akin to a much more expensive luxury SUV. I wouldn't demand higher sensory quality from Acura, BMW or Lexus, I’ve driven them all. You will find 2015 CR-V MSRP and specifications here.

Honda was kind enough to provide Torque News with the opportunity to examine and test drive the competition.The second best selling SUV in North America is Ford’s Escape. While I like Escape for utility, in a side by side comparison to Honda CR-V, Escape falls flat on interior accommodations, overall ride characteristics, tech-connectivity and safety. And kindly put, Escape doesn’t present the esthetic package CR-V does. Nor did Nissan Rogue or Toyota Rav4.

As usual I’m getting a little long winded here

If I was to focus on one improvement made on CR-V for 2015 it would be the suspension and ride. My daily driver is a 2006 Chrysler Pacifica AWD. it was co-built with Mercedes Benz, weighs close to a thousand pounds greater than CR-V and packs close to 300 ponies under the hood. 24 valve V6 power does that. When purchased new the Pacifica left the showroom for a bit under $50,000. So, placing my personal driver to the side of the road, I’ll state with conviction that CR-V approaches the ride, handling and quiet of a car costing twice as much.

Honda’s done one heck of a job of reducing exterior noise transference, reducing body roll in S turns while improving the overall ride; not an easy thing to do in a relatively short-channeled vehicle sporting large rims and tires.

That’s nice, what about heat and air conditioning?

We’ll get into the upgraded electronics, active and passive safety features in our next CR-V article