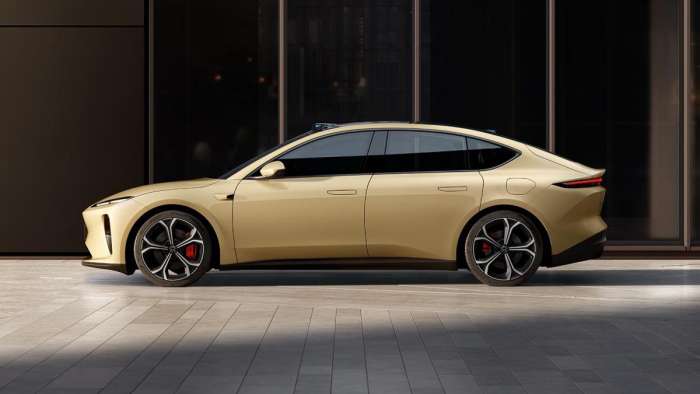 Nio Day 2021 marked the coming of the all-new mid-size sedan called the ET5. Smaller than the Nio ET7, the new ET5 is Nio answer to the Tesla Model 3 and the Polestar 2. Nio plans to sell it in China with a 150 kWh battery pack, two electric motors good for 480 horsepower, and a claimed range of 620-miles. That is just the start, tough.
Advertisement

Deliveries for the new Nio ET5 are scheduled to begin in China in September 2022, but we have enough meat to compare the vehicle to the Tesla Model 3 and the Polestar 2. All three cars share a similar basic form, but the Nio may have an edge in China. Yes, I could write extensively about the specs and numbers, but you are definitely better to get to know this car in the table below. 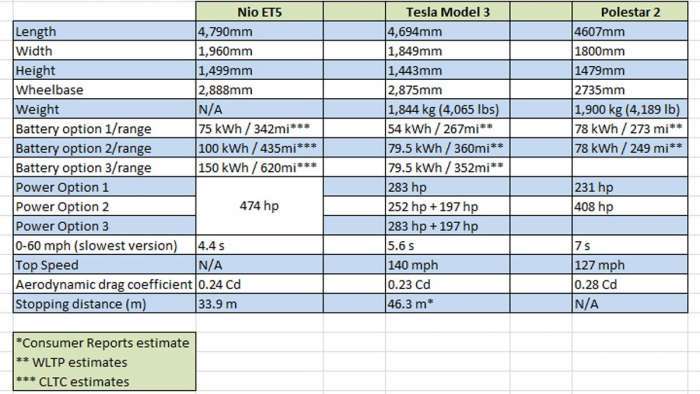 These preliminary specs could change in the future and depending on the markets Nio ET5 reaches. It is plausible that Nio will sell it in China and Europe. For that matter, Nio ET7 is on its way to certain European countries in March next year. A similar fate awaits the ET5 as well.

Based on the new dedicated chassis and steel aluminum body, the Nio ET5 design follows the C-NCAP and Euro NCAP 5-star standards. Usually, that is more than enough for the 5-star rating by the NHTS if this car ever comes to the US (which is not likely). 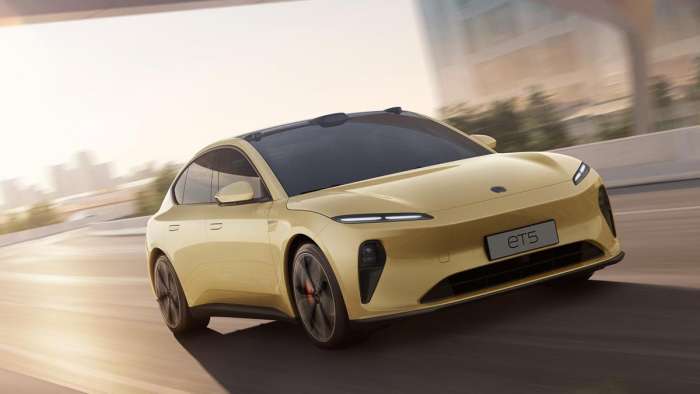 While it is a tad longer than the Model 3 and the Polestar 2, the ET5 features a sleek design, clearly indicating its slippery silhouette that cuts through the air with a 0.24 Cd drag coefficient. Almost as good as the Model 3.
Beneath this striking exterior, Nio created a pretty intricate design that allowed for integrating the five-link suspension on all four wheels and achieved a rather remarkable 50/50 weight distribution. Along with fat 20-inch wheels and a low center of gravity, the Nio ET5 should be fun to drive. However, the technological advancements and the raw power of 480 horsepower sent to all four wheels somehow don't feel as vital as they did sometime before. Maybe it is just me! 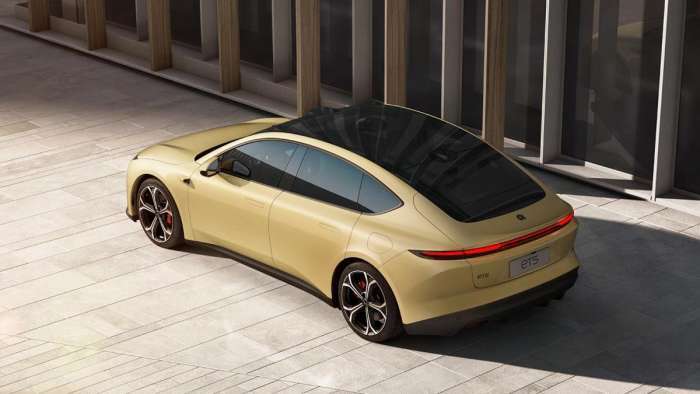 Nevertheless, with two electric motors - 150 kW induction motor at the front and 210 kW PM motor at the back, the ET5 offers plenty of power. So much so that Nio crafted eight driving modes for the ET5:
- Sport+
- Comfort
- Eco
- Sport
- Snow
- Sand
- Wet
- Custom
Sharpen up the Custom, and you can have three different sport modes here.

This is where it gets interesting for all the techies. I will give you a blurb about every interesting tech feature Nio developers conjured in their dungeons.

ADaas (autonomous driving as a service) will become a thing in a few years. With the technology onboard, the Nio ET5 will be ready to receive software updates enabling the car to give "autonomous driving experience in scenarios such as highways, urban areas, parking, and battery swapping." In short, the ET5 will drive itself in certain conditions. The ADaas is a service you can expect to pay a monthly subscription - $107. I am not joking!

Incorporating artificial intelligence, the Nomi can directly talk with each occupant in the car. The system can learn daily routines, set personal seating and steering positions, accept verbal commands, offer real-time driving assistance, and even entertain the driver and guests. It is also cute sitting there on top of the dash.

The PanoCinema should blur the line between reality and virtual spaces. With AR glasses that can project a 201-inch screen size, the PanoCinema should give a fantastic VR experience in the ET5. Why, you may ask!? Well, if you are stuck in traffic, you can use it, or if you are parked somewhere. Yea, that's the thing!

Nio Adam is an NVIDIA Orin processor that will make automated driving possible. Let Nio CEO William Li explain it to you:
“The cooperation between NIO and NVIDIA will accelerate the development of autonomous driving on smart vehicles,” said NIO CEO. “NIO’s in-house developed autonomous driving algorithms will be running on four industry-leading NVIDIA Orin processors, delivering an unprecedented 1,000+ trillion operations per second in production cars.”

I have already told you about the PanoCinema, a system that could completely change how we interact with the car and our reality. However, to work, Nio had to install a 7.1.4 surround sound system in the car, then complement it with 256-color curtain ambient lighting. In conjunction with dedicated AR glasses, I can only imagine how trippy the interior of the ET5 could become.
No wonder why Chinese tried to make it as clutter-free as possible. 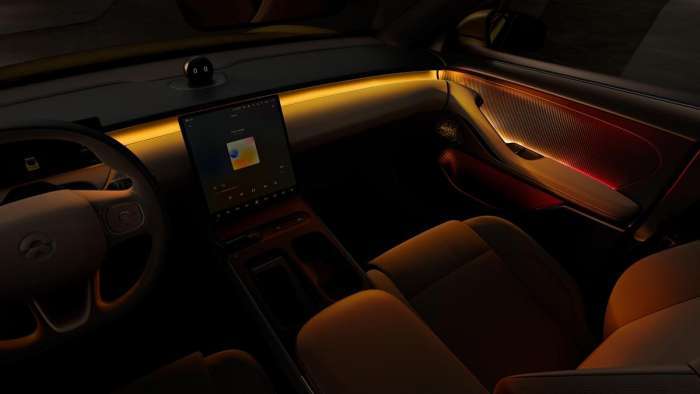 There are no visible wents, not many buttons, and even the whole interior received a Clean+ fabric treatment. In short, the inside of the ET5 looks as clean as possible despite the massive 12.8-inch AMOLED display on the center console!

As with other Nio cars - like the ET7 - the ET5 will use a second generation of the NIO Power Swap option. It is a system where a vehicle automatically parks itself inside the battery swap station, and the station swap depleted battery with recharged one. As it turns out, Nio has more than 700 stations in China, and they have completed the four millionth battery swap in their cars on 29th September 2021. The system will come to Norway and some other European countries shortly. 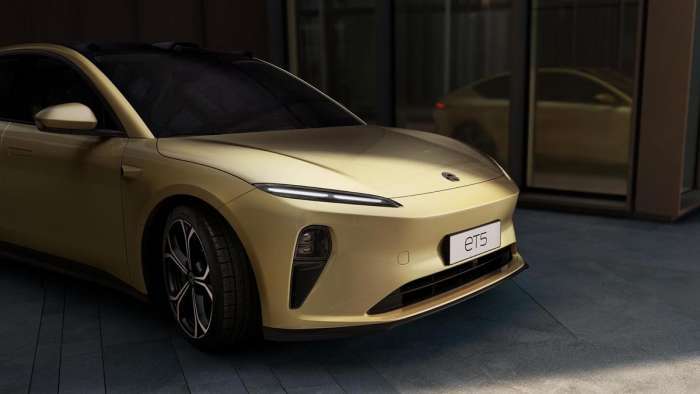 If you are still unaware of how it works, let me dumb it down a bit - you drive your car to the station, the car parks itself in the station, and the mechanical system inside the station removes the battery from your car, and then put in a recharged battery. It is that simple, and it offers one more alternative to charging. The process takes less than 5 minutes.

Another factor in the Battery as a Service offering is that the buyer can lease a battery separately from buying a car and pay around $150 for a monthly battery lease. In the case of the ET5, the one with the 75 kWh battery costs $51,450. However, if you choose to lease a battery for $153.72 monthly, you will pay $40,470 for the car.

Regardless of how you choose to buy your ET5, you are entitled to: 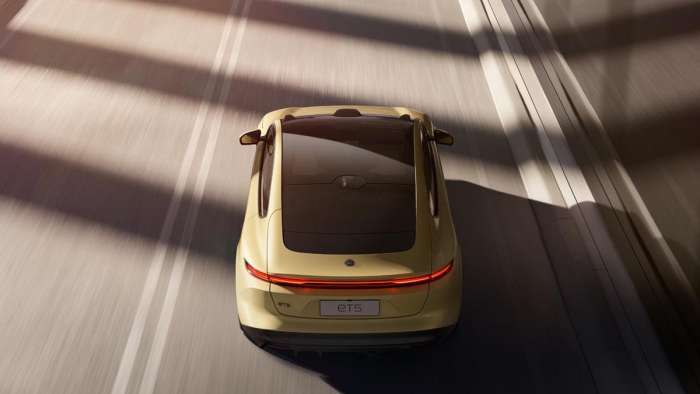 As far as new electric cars go, the latest Nio ET5 offers some out-of-the-box features like the Baas system, good range, and intricate interior features. However, it remains to be seen if all the Nio subscription models will work. I wonder how it will all work when Nio ramps up its production and puts hundreds of thousands of cars on the road!?