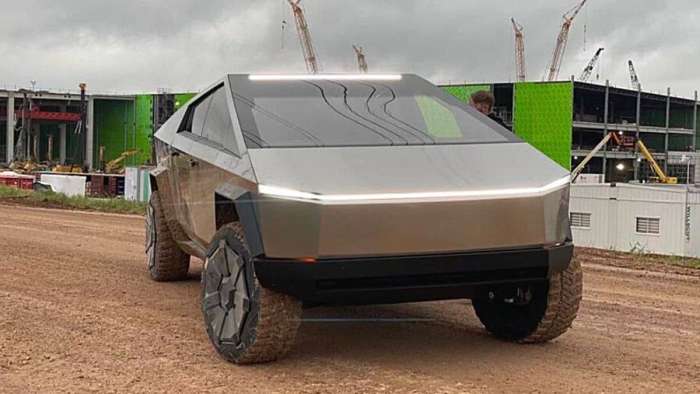 The Cybertruck’s solar tonneau is certainly a key feature for any future buyer, given the fact that it would give the possibility of semi-total independence from the grid and charging stations; obviously depending on the number of miles a day driven. With 15 miles of added solar range, and with the option of adding another 25 miles (totaling 40 miles on 100% solar) by adding extra foldable solar wings, the feature is certainly attractive.
Advertisement

According to statista.com and many other sources, the average daily drive in the U.S. is somewhere between 25 and 30 miles: “… On average, American drivers today are moving their vehicles considerably less than they were sixteen years ago, but they still totaled an average of 25.9 miles per day and per driver in 2017. The average driver also made more trips in 2001 than in 2017, when 2.7 daily vehicle trips per driver with an average length of 9.6 miles per trip were recorded. In 2001, the average driver made 3.4 trips with an average of 9.9 miles”. This statistic shows the average number of miles driven per day in the United States between the years 2001 and 2017.

Several start-ups, such as Aptera Motors, Atlis Motor Vehicles, Fisker Inc., Lightyear One and Sono Motors, as well as established OEMs like Hyundai, Tesla and Toyota, are developing solar cars or hybrid versions of them. They are integrating solar cells into roofs. However, other body parts such as doors, hoods, tailgates, and trunks, are also prime real estate. Solar panels can be attached to vehicle bodies using mechanical fasteners or structural adhesives. However, to be aerodynamic and aesthetically pleasing, automotive engineers prefer to integrate solar modules into body panels.

A good example is the Light Year One, a solar car from the Netherlands with a range of about 440 miles (710 Km), equipped with a small 60 kWh battery. The Lightyear One achieved those 440 miles of autonomy in one of its latest development tests. In the coming months, the Dutch company will subject its electric vehicle to the necessary homologation tests to be able to start its production. The first deliveries are scheduled for early 2022. This prototype has more than 700 km of range with an energy consumption of only 8.5 kWh / 100 km at 85 km / h” according to Lex Hoefsloot, CEO and co-founder of Lightyear.

Another good example is Aptera, a California-based solar car company. According to their site (www.aptera.us), “Aptera’s Never Charge technology can give you up to about 40 miles per day of free driving powered by the sun. We built the most efficient vehicle, then equipped it with 700 Watts of solar power.” With prices starting at $ 25.900, and features like Aerodynamic Design, Lightweight Composite Materials, Efficient Drivetrain, Solar Recharging Capabilities, Skin Cooling System and Advanced Motors, they claim they can go up to 1000 miles, thus producing the world’s most efficient solar car.

Back to the Cybertruck, it is widely known that its specs are already amazing: according to the data published on Tesla’s website, the access version of the electric pickup will offer a range of 250+ miles (EPA est.), will be able to accelerate from 0 to 60 miles in 6.5 seconds and tow loads of up to 7,500+ lbs., at a $39,900 price. The next, superior version, which will have two electric motors, a towing capacity of 10,000+ lbs. and an acceleration of 4.5 seconds for 0 to 60 miles, will have a tag price of $49,900.

And if this seems not enough, do not worry, the Tesla Cybertruck will also have an electric variant with three motors with technical characteristics superior to those of most electric cars on the market: it will be able to accelerate from 0 to 60 miles in 2.9 seconds, travel 500+ miles (EPA est.) between recharges and tow an impressive 14,000+ lbs cargo. Of course, in this case the price rises to $69,900.
The solar tonneau will be a key feature in the overall design, giving a huge advantage to an already amazing electric truck.