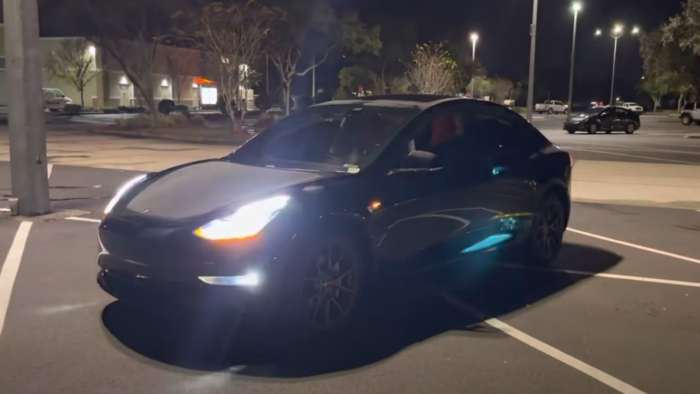 You Can Program Your Tesla To Light Up and Play Music

We're seeing videos from people playing music and having their Tesla car light up. What's even cooler than that? You can program your Tesla to light up and play any music you want!
Advertisement

Tesla's Can Now Be Programmed to Light Up and Play Music

With this latest video of a Tesla lighting up and playing music, we are seeing Tesla evolve more into a software and services company where Tesla vehicles are more like a phone on wheels with apps and software capabilities.

Tesla has a lot of apps and functionality in its cars. In fact, there is so much functionality, that I wonder if one will even need a phone when they are in a Tesla. I could see a phone becoming obsolete eventually, if Tesla matches all functionality within its cars.

There have been rumors that Tesla will be making some kind of phone in the future, but I don't think this is true. I think Elon Musk will leap frog the phone and use some kind of device related to Neuralink to interface with computers. We'll have to wait and see how that happens in the future.

A Tesla car can also be programmed as their is a Github project for Tesla that allows for creating any sequence of lights and attaching your own MP3 audio file to it.

When I looked at the Github example project, I counted at least 54 lights on the Tesla vehicle that could be controlled! 54 lights! That's a lot of lights!

What Will Be Programmable in the Future?

I strongly believe that Tesla will eventually allow for a car personality to be programmable in the future. It would be something like Knight Rider and his car, Kitt, from the 1980s. I think this is something that everyone is sleeping on and nobody sees coming. But having a car that greets you as you enter it and talks to you - similar to how Jarvis talks to Tony Stark, is going to come in the future. It's not a matter of IF, but WHEN. This will be one of the main programmable features in the future.

There will also be an option to have in-car monitoring for when robotaxis start to become used. An owner of a robotaxi will want to be able to see inside the car what is happening in order to make sure it is safe and that nothing shady is going on. If damage is done, the Tesla owner will have video evidence. The only thing that could stop this is legalities preventing cameras from showing the occupants.

There will be options for a robotaxi and how it operates. How aggressive will it drive? What are the most desired routes? In Utah where I live, I would have a robotaxi primarily act as a shuttle from the Salt Lake City airport and to surrounding cities within 50 miles. Longer trips on the freeway will rack up more miles and earn more profit.

Lastly, I think that eventually, a Tesla will be able to know when it needs to be serviced and just drive itself to the nearest service center automatically. There won't be a need to schedule this for an owner of a Tesla, it can just happen automatically if an owner decides it.

How do you like the Tesla music and light show? Are people going to be programming their Tesla's to light up and play music? What other applications will there be for Tesla programs?