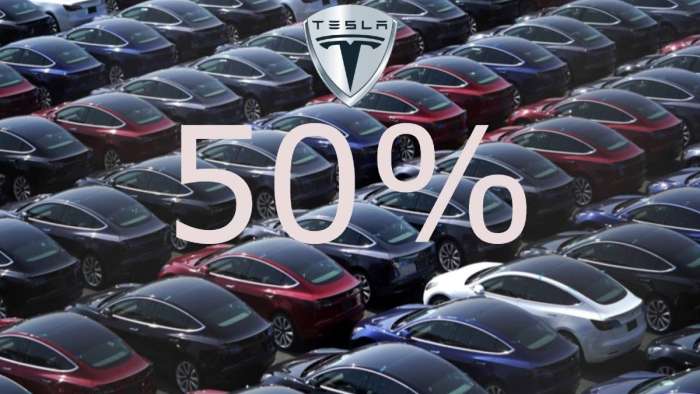 We recently heard news that President Joe Biden wants 50% of all vehicles sold in the United States to be electric by 2030. It's unclear if this means hybrid vehicles or not. Regardless, we think Tesla will own a significant share of electric vehicles by 2030 and here's why.
Advertisement

Recently, we learned that Tesla was snubbed from an Electric Vehicle meeting with other auto makers, the White House, and President Joe Biden, due to Tesla not being a unionized company.

This isn't a problem and Tesla will have a large share of the market in 2030 and their advancements will force other auto makers to go electric without any pressure from the White House or government.

I've talked about Tesla's future vehicle growth many times and that Tesla will grow at least 50% every year in vehicle production. I think this is a conservative estimate, but let's take a look once again at Tesla's projected vehicle growth starting with last year's actual numbers:

By 2030, Tesla should be producing close to 30 million vehicles and many of these will function as autonomous robotaxis. In total, Tesla will have about 86 million vehicles on the roads that are all electric.

Other auto makers are planning on releasing 1 million electric vehicles by 2025. Even with all other auto makers doing this, the combined vehicle production of them won't even come close to Tesla's 86 million vehicles on the roads in 2030. This is a dilemma for gas powered cars that currently dominate the roads.

With all this in mind, I believe Tesla will have 50% share or more of the electric vehicle market by 2030. Unless legacy auto makers can kick it into high gear and start making the transition sooner at a cost effective price, this seems inevitable to me.

Why Tesla Can't Be Caught

The reason Tesla can't be caught is because they have a HUGE head start in electric vehicle MASS production and they have the best technically minded visionary on the planet, Elon Musk.

Tesla is on an exponential growth curve:

Look how Tesla's revenue has grown since 2009$TSLA @elonmusk pic.twitter.com/krmzY3zERR

We humans have a hard time understanding exponential growth. It seems impossible that something can continue to grow at 50% every year. When we walk, we take one step at a time and that is how our minds think.

It is the culmination of all of these compounded together that causes a "snowball" effect for Tesla that allows them to participate in exponential growth. If they weren't doing all these things, I would not have confidence that they would grow at 50% or more a year.

Steve wrote on October 29, 2021 - 12:28am Permalink
Your arguments are terrible. This isn't bacterial growth its the car market. Your proposal that tesla will jump 9 million cars of sales and production in 1 year, with competitors watching and doing nothing is ridiculous.
Real person wrote on December 5, 2021 - 2:28pm Permalink
This author is delusional
Ellen Musk wrote on December 5, 2021 - 2:27pm Permalink
Is this a joke? Tesla probably won't even make vehicles by 2030. If so, it will be through license with another automaker. Current profits aren't from vehicles and sales will decline as soon as other EVs hit the market. For example, no redneck is going to buy some shitty cyber truck, but they'll definitely buy an electric F-150e, RAM 1500e, etc... These are the people who regularly waste money on vehicles, not nerdy hipsters sucking on musks micropenis.