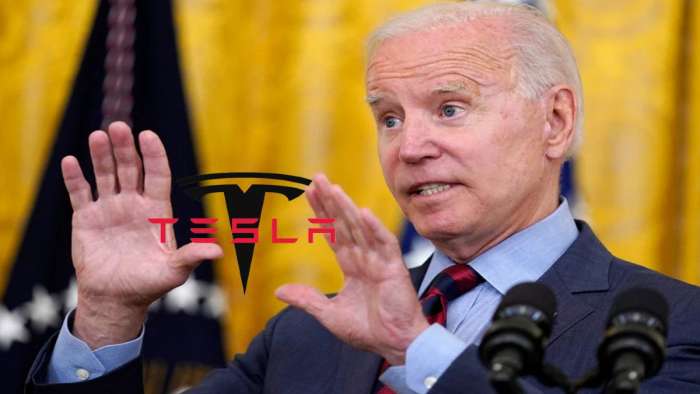 We have news of an EV meeting with auto makers Ford, GM, Stellantis, and the U.S. White House along with President Joe Biden. One auto maker is not invited that we know of. And that EV/auto maker is Tesla. Why wasn't Tesla invited to this event?
Advertisement

The White House, President Joe Biden, and other auto makers, such as Ford and GM, and Stellantis will discuss Electric Vehicles today. There is one auto maker that doesn't seem to be invited and we are wondering why. And that auto maker is Tesla.

Will The White House Exclude Tesla, The Most American Made EV, From Its EV Event? https://t.co/loRazecbsp

What is Happening With EV's and the White House?

Why is $TSLA @elonmusk absent from today's White House event on #electricvehicles?

"I'm not sure. What I know is you are seeing so many leaders in industry," says @SecretaryPete pic.twitter.com/Buv06fMiPm

One of the biggest reasons people are saying that Tesla wasn't invited is because Tesla doesn't have any unions within its company. Ford, GM, and other auto makers do have unions. Others have wondered if Tesla being already 100% electric is causing them to be dismissed from this meeting about EV's. This would mean Tesla is doing so well that they don't need their "hand held" by the U.S. government to make progress on electric vehicles.

Still, others are saying that the reason for this meeting is to slow down the progress of electric vehicles in the United States, in order to give gas and oil companies more time to survive and try to come up with a strategy to transition.

Tesla makes up over 50% of all electric vehicle sales in the United States.

For me personally, I don't think Tesla needs to attend this event because there is no benefit to Tesla from attending. However, there would be great benefit to the other auto makers and the U.S. government to learn about how Tesla has successfully built its electric vehicle fleet and auto business.

What do you think about Tesla being left out of this meeting with the White House? Is it fair to Tesla? Or should Tesla be happy they aren't invited?

tangible wrote on August 5, 2021 - 6:54pm Permalink
Only UNION supporting companies need apply, whether US-based or not....
DeanMcManis wrote on August 6, 2021 - 4:43am Permalink
I totally agree that Tesla is being ignored, and it is a problem. But looking back as little as a year ago, the future of EVs (including PHEVs) was horribly bleak. And seemingly doomed to failure, or at least limbo. I want to see Tesla rewarded for their innovations and commitment to BEVs. But with overall BEV sales still well under 10% country-wide, a LOT of focus and incentive needs to be applied to all of the legacy automakers who still make ALL of their profits off of gas powered vehicles. We need to push (and support) legacy automakers to move to EVs. And if that means including plug-in hybrids along with BEVs to get the whole number of plug-in/BEVs to 50% of new vehicle sales within the next decade, I am all for it. The previous administration showed that positive change can be stopped, and actively reversed. And getting all of the people who are currently on the fence about EVs moved over to supporting some kind of plug-in EV/BEV is a vital move towards it's success.
mark wrote on August 6, 2021 - 9:51pm Permalink
The reason that Tesla was not invited was nominally because it is not a union shop. Another concern for the administration is that Tesla is seen a symbol of liberal arrogance and luxury. Sure the Model 3 is an affordable EV but it competes against BMWs, Alfas and Porsche. Not Chevys, Fords and Toyotas. Cars seen as affordable vehicles for the working man. Tesla could have shown a Model 3 or Y and you KNOW Fox would have commented that Biden was promoting subsidies for people buying $100+ cars and referencing a Model S or X price. They just do not need that noise whenntrying to advance an agenda that WILL help Tesla while really helping the planet.
BobK wrote on October 8, 2021 - 1:25am Permalink
THE MEETING WAS ABOUT CONVERTING FROM VEHICLES THAT EMIT EMISSIONS _TESLA VEHICLES HAVE NO GASOLINE ENGINES THAT CAUSE EMISSIONS _THE ARTICLE IS BIASED THINKING THAT BIDEN WOULD SNOBBISHLY CUT TESLA OUT JUST BECAUSE THEY DON'T HAVE UNIONS