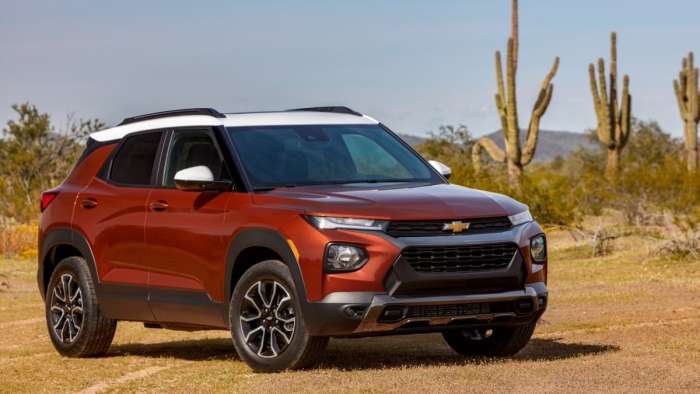 General Motors is recalling 135,000 Buick Encore GX and Chevrolet Trailblazer models because the vehicles jacks can break if they aren’t positioned properly. So far, GM has had 21 reports of the jacks breaking. The concern is that if the jack breaks while supporting the vehicle, the person working on the vehicle could be hurt.

GM Vehicles That Are Affected

The recall affects 79,404 2021-2022 Chevrolet Trailblazer crossovers. The recall also involves 55,996 2020-2022 Buick Encore GX models. The non-GX models are not included in the recall. GM informed the National Highway Traffic Safety Administration that the “vehicles are equipped with an emergency jack that, if not positioned as directed in the vehicle owner’s manual, could fracture and fail to support the vehicle.”

According to GM, “If the jack fractures while under load, the vehicle could collapse, potentially injuring people near or under the vehicle.” GM claims that the plastic jack is fine, if it is positioned exactly as it is supposed to be according to the owner’s manual. However, the jack could fracture if the driver positions it incorrectly.

In a NHTSA report it says that a GM test driver reported a broken jack during a durability test on a 2021 Chevrolet Trailblazer. Another GM engineer also reported a problem. GM opened an investigation on April 20, 2021. GM analyzed the jack and confirmed that it failed because the user mispositioned the jack. GM’s investigation identified 21 field claims alleging that this jack failed in the field. According to GM, “Although the jack is sufficiently robust when used appropriately and per the included instructions, failures can still occur due to customer usage.”

Once the recall is underway, dealers will replace the recalled jack with a metal jack with a different design. Undelivered vehicles will have the plastic jack removed prior to delivery and owners will be given a replacement metal jack as soon as one is available.

DeanMcManis wrote on June 25, 2021 - 2:02am Permalink
It is a scary enough thought that GM is actually shipping plastic automotive jacks in the first place! But the idea that it can break when installed incorrectly is more worrisome. Because these days nobody EVER reads a manual. Is it too much to expect that GM would have an easily accessible website with the most basic equipment and vehicle use videos that every GM owner should know? Especially when it comes to owner safety.