Chevrolet was never really in the game in the subcompact crossover category (except the Trax). But now, seeing the strategic value of the segment, Chevrolet brings the new 2021 Trailblazer, a brand new model with a household name, to spark interest.
Advertisement

With the 2021 Chevy Trailblazer you have the choice of four different versions. The LS and LT models are the basic trims while the RS and ACTIV versions have a more distinct personality. For example, on the RS you have dark exterior trims with a hexagonal black grille, an RS emblem and two tailpipes with rectangular chrome tips that add character. The ACTIV version offers to go a little further than asphalt with more competent shocks, 17-inch all-terrain tires and higher ground clearance with skid plates. Chevrolet Trailblazer ACTIV's all-wheel drive will allow you to go all the way if not off all terrain.

The 2021 Chevrolet Trailblazer has a practical size.

Even though the Trailblazer is short, its high roof gives the vehicle a great sense of space. The rear seat folds down to free up 91,530 cubic inches of space. The front passenger seat can be folded flat (optional), allowing an object up to 2.5 meters to be swallowed up. The rear seats are also the most spacious in the segment.

Passengers have no shortage of space either in height or at the level of the legs. Instruments like the radio and air conditioning fall very well to hand and require very little adaptation for ease of use. The traction control, lane monitoring, integral mode and sport adjustment buttons are placed at arm's length at the bottom of the center console. Behind these, a charging plate for a smartphone was present in our ACTIV model. 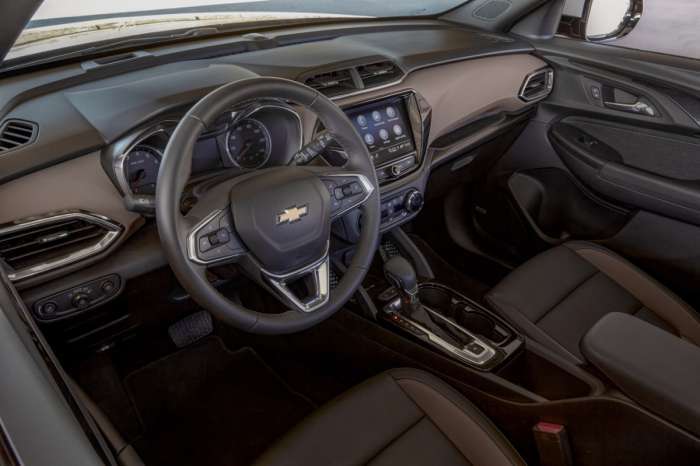 Small without being tiny, the Trailblazer comes between the Trax and the Equinox in the Chevrolet lineup. He is by the way much smaller than - and above all has nothing to do with - his ancestor who once bore the same name.

As this is a vehicle that is likely to appeal to the people in mid thirties who have young families, technology is at the center of the concerns. In addition to Apple CarPlay and Android Auto integration, you have a standard seven-inch color touch screen, 4G LTE technology with integrated wireless access point, a Bose audio system (optional), the teenager function as standard, which allows parents to adjust controls and check their teen's driving habits while behind the wheel.

Convenience Package on LT, RS and ACTIV trims includes an eight-inch color touchscreen, two charge-only USB ports (one type A and one type C), 120-volt power outlet, interior mirror with auto-dimming and driver and front passenger sliding sun visors with illuminated flap vanity mirrors. On the same versions, you also have the option of an electric double sunroof and an electrically operated tailgate.

The Exterior of The 2021 Chevrolet Trailblazer

The 2021 Chevy Trailblazer has style. It stands out in the automotive landscape and, without a doubt, we immediately notice that it is made for the urban jungle. Its high beams are placed at the top of the huge central grille, and just below, we find the headlights which also integrate the turn signals. This type of design is becoming more and more frequent among several manufacturers who attack SUVs made for living in the city. 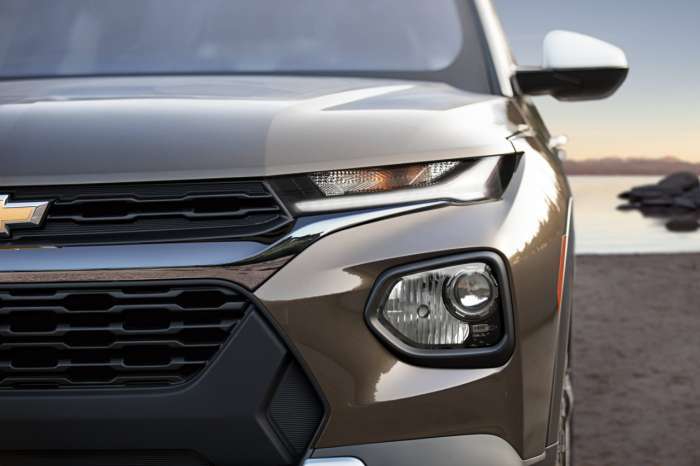 However, this style may not be suiting to everyone's taste, but on the Trailblazer, the result is quite pleasant. The roof of the ACTIV trim, is white, makes the Metallic Zeus Bronze color of the body to stand out.

This is a nice color combination. Some people may not like it immediately, but you get used to it. Let's not forget, this is an urban SUV that is “crawling” on the sidewalk and adept at squeezing through traffic. Moreover, Chevrolet has dared to offer original colors such as metallic dark copper, always with this contrasting roof in summit white or Zeus bronze. In short, the result is original and contributes to the overall appearance of the vehicle.

I loved driving the 2021 Chevrolet Trailblazer. Despite its small 1.3-liter 3-cylinder engine and 155 horsepower and 174 pound-feet of torque (in the case of the ACTIV variant), the Trailblazer delivers when it comes to performance. GM has managed to make the model fun to drive, first because start-up performance, without being explosive, is still very much above average in this segment. Then, the vehicle is agile and responsive and the brakes are powerful.

When it comes to driving and handling, this crossover is more persuasive. A little firmer in its damping than its cousin, the Buick Encore GX, the Trailblazer has precise steering. Its chassis ensure sufficient driving pleasure, but rolling noise would benefit from being better isolated from the passenger compartment to polish its refinement.

I think the Trailblazer is a much more successful effort than the Trax, which is also still offered in the Chevrolet range, despite its identical positioning. Some people have complained of too much hard plastic in the interior. I am personally fine with it. Thus,all in all, a good progression, but it is not yet enough to hope to dislodge the best of its highly competitive group.