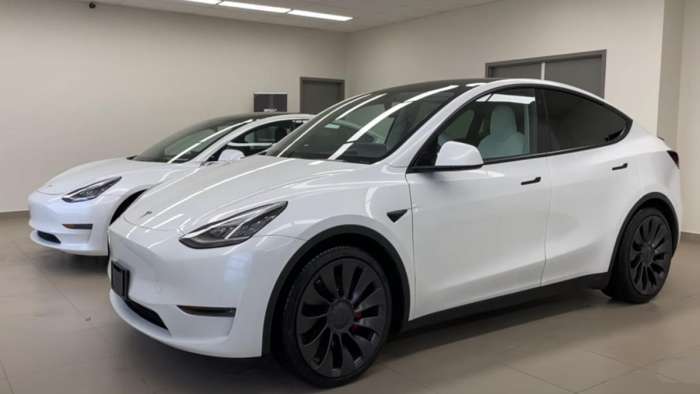 Tesla Takes the Lead in U.S. Luxury Vehicles. Next Up: All Vehicles

Tesla has taken the lead as the #1 U.S. luxury electric vehicle maker. This only took 4 years to happen and is for the Model Y and Model 3. Next up for Tesla: taking the lead for overall vehicle sales, including ICE cars.
Advertisement

Tesla Takes the Lead in U.S. Electric Vehicles. Next Up: All Vehicles

That's an amazing rate of progress. And this is for an electric vehicle (EV) that is competing against all other electric vehicle and ICE vehicles. Let's take a look at how far Tesla has come and what this lead will look like in the future. We'll also take into account new players like Polestar, Lucid, and Rivian to see if they show up anywhere.

Where will Lucid Motors be in 2026? I think if they are able to ramp production, we could see 200,000 vehicles delivered from them. That's a lot of cars, but Tesla is already delivering more than that in the U.S. And Lucid is a high-end luxury brand anyway. I think both companies can and will succeed.

What About Tesla Leading all Vehicle Sales?

For Tesla to lead all vehicle sales is going to take a bit more time. But I don't think it will be that long. I use 2025/2026 as a best guess when Tesla will be the leader in total vehicle sales, whether luxury, not luxury, EV, or ICE (internal combustion engine).

With Tesla likely selling 6 million or more total vehicles around 2026, I think it's safe to say that they are going to leap frog the current leaders in total vehicle sales in the U.S. Meaning that with the slow decline of ICE vehicles, and Tesla continuing to ramp production, we'll see what is today change to something quite different in 2026. Let's take a look at it (from GoodCarBadCar.net):

We can see a "heat map" of total U.S. sales by brand in 2021. Tesla is simply a smaller box toward the right side. Toyota, Ford, Chevrolet, Honda, and Nissan are the current leaders. However, those companies are selling mostly ICE cars. In another 4 years, as EVs reach parity with ICE cars, ICE cars are going to decline in sales. People are going to do what is best for themselves always. Therefore, I think we'll see Tesla in the upper left as a much bigger square in 2026. Toyota, Ford, Chevrolet, Honda, and Nissan will still exist, but their squares and total market share will be much smaller. The top vehicle seller in 2021 was Ford.

Here's another way to see the data - with a list.

This is the advantage Tesla has with first mover advantage and having the greatest manufacturing scale. As 2026 and beyond happens, I believe we'll see Lucid and Rivian start to enter the picture, as well as some Chinese companies, such as Nio. I believe battery swapping may not be practical as a charging method, but having a very fast way to change your battery will still be useful for cars that use the entire lifetime of a battery.

Is Tesla going to maintain its lead in luxury vehicles? Will it take the lead in All vehicles next? If so, how long will it take?