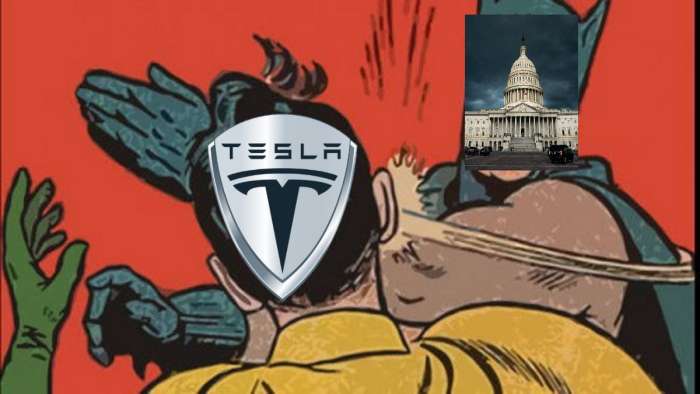 We've seen reports on the newest revision of the proposed electric vehicle tax credit bill. There's a few things that are a direct slap in the face of Tesla and other all-in electric vehicle makers. Let's see what it is.
Advertisement

Can anyone in the @WaysMeansCmte justify a $9,000 tax credit for vehicles with 7 kWh batteries — batteries which cost less than $1,000? This is an egregious waste of resources, ensures the US falls behind in new energy vehicles, and enables further destruction of our environment.

To look at why the latest iteration of the proposed electric vehicle is a slap in the face of Tesla, let's look at one of Tesla's most grounded and realistic analysts, Rob Mauer. Rob has an even temperament and has a very logical and clean way of looking at things. He points out some key things that make the most recently proposed tax credit a slap in the face of Tesla and any other U.S. all-in electric vehicle makers like Rivian, Lucid Motors, and Arcimoto.

The Electric Vehicle Tax Credit at a Glance

Let's take a look at an overview of the electric vehicle tax credit bill as it currently stands:

Domestic (Union) Incentive
* $4,500 for being part of an employer sponsored union within a company
* Domestic content: $500 (I believe this means 50% components and batteries made in the U.S.)

Something like the Ford Mustang Mach-E would not qualify for the $4,500 because they are currently manufactured in Mexico.

The U.S. seems to be going all-in on plug-in hybrid vehicles instead of going all-in on electric vehicles. The U.S. government won't even say the name Tesla. This is a slap in the face of Tesla. Supporting plug-in hybrids is not a path forward to renewable energy and reducing the carbon footprint of the world.

The tax credit bill has also been criticized by Honda and Toyota, companies who are not run by UAW (United Auto Workers) - union run organizations within companies.

The proposed tax credit bill benefits hybrid vehicles and unions way too much. The U.S. will fall behind other countries unless it accelerates the transition to electric vehicles faster. Tesla is getting slapped in the face with this bill, but will still succeed as a company due to its superior safety, performance, technology, and range.

What do you think of the latest proposed electric vehicle tax credit bill? Is it a slap in the face of Tesla? Will it get revised from this? Will unions get less of a benefit?

David Harkness wrote on September 15, 2021 - 10:24pm Permalink
This bill shows how out of touch and ill informed out legislative body is. Rob Maurer could not have said it any better. Congress, get educated in EVs and what we need to win this race over China!