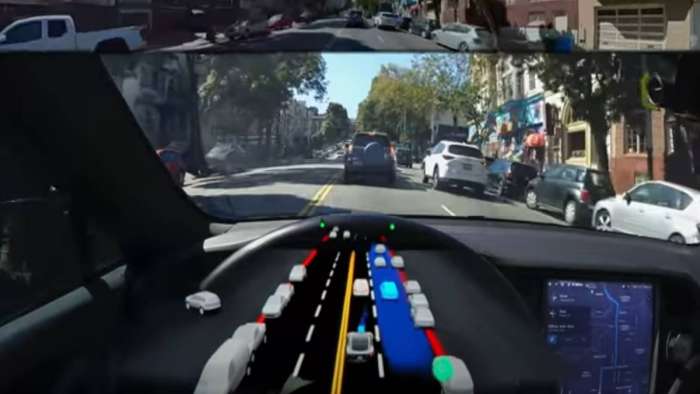 How Far Ahead is Tesla With Full Self Driving?

Is Tesla ahead in FSD (full self-driving)? Elon Musk thinks so and said in a recent interview that Tesla was 5 years ahead of any competition.
Advertisement

How Far Ahead is Tesla With Full Self Driving?

How far ahead is Tesla in full self-driving (FSD)? Elon Musk seems to think that Tesla is at least 5 years ahead of any competition. Yet, if you look at some analysts on Wall Street, they think everyone will reach autonomy at about the same time. Who is right? Let's find out!

Tesla is unique in that it has taken a cameras and software approach to solving a car that can drive itself - that is FSD. The reason Elon Musk made this decision is because humans drive with their eyes, brain, and limbs, and this is intuitively the best way to get a car to drive itself.

To make this happen, Tesla has removed radar and lidar from its FSD system and is now only using cameras and software. Other companies besides Tesla are using radar and lidar in order to try and solve autonomy. There is fierce debate on which one will be best long term.

There are numerous videos being put on YouTube with people using Tesla's FSD Beta without disengagements or interventions. One of them is Whole Mars Catalog, who has shown again and again very successful drives with Tesla's FSD Beta.

But, the software isn't always perfect. There are times it makes mistakes. But these mistakes are lessening over time. The software is slowly improving and handling situations that it used to struggle with. The big key for success for me will be when Tesla's FSD will be able to handle unprotected left turns again and again without intervention or disengagement.

An intervention in FSD is when the driver has to do anything to the car, even if it's just lightly tapping the accelerator to give the car a little push. This doesn't turn off the FSD software, but it is still driver interaction.

A disengagement is when the driver of the vehicle turns off FSD for any reason - and this is usually because the car was about to do something it wasn't supposed to like turn into a construction cone, or was moving toward another car, or something generally considered dangerous.

Other companies like Ford, GM, and Chinese EV companies are using radar and lidar, and are limited to specific locations. What I find the most interesting about Tesla and other companies in regards to autonomy is that there just isn't many other videos of other companies and their vehicles driving around autonomously in a successful way.

And to me, that is the biggest leading indicator that Tesla is far ahead in solving this very difficult problem. The sheer number and volume of videos appearing on YouTube and the increased number of FSD Beta testers - now over 100,000. As this number grows and the software improves, we will see more and more flawless drives.

When I see videos of Waymo or other companies and their autonomous software, the videos seem to be edited and presented in a way to show it in a good light. Comma AI seems to be the next best solution for solving autonomy. What I like about Tesla FSD and the videos on YouTube is that mistakes are very clearly shown, especially with Chuck Cook and his unprotected left hand turn videos.

Do you think Tesla is in the lead in solving autonomy? What other companies are close, if any?