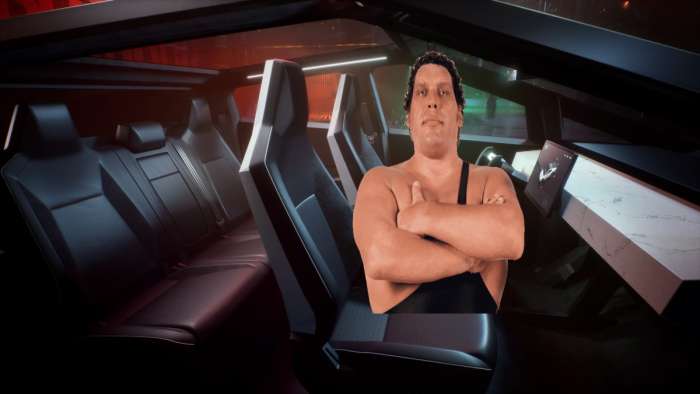 Elon Musk Says Even Andre the Giant Will Fit in Cybertruck

Elon Musk Talks About the Size of the Cybertruck

Elon Musk responded to around 26,000 comments a few years ago and one of those comments was from someone who was 6'9'' and was concerned that they wouldn't be able to fit in the Cybertruck very well.

Elon Musk responded by saying that the Cybertruck would be able to fit even Andre the Giant. If this is true, that is a significant amount of space for the driver since Andre the Giant is 7'4'' and weighed 520 pounds.

Will this be true when the Cybertruck releases? Based on what I've seen from the pictures of the interior of the Cybertruck, it appears this will be true. In fact, there is a YouTube video about a man who was 6'4'' riding in the Cybertruck in the back and he said he had plenty of room.

Sir, this will not be some a dainty little buttercup of a truck! Driver’s seat will be big enough to fit André the giant (love that guy).

What Else Did People Request for the Cybertruck?

Someone requested that the Cybertruck has a flat bed with no wheel well humps and that would be amazing. Maybe it wouldn't be possible with width restrictions.

The Cybertruck pictures appear to show that it looks very flat and that there are no wheel humps.

Someone else requested a built in bed cover that can roll out when needed. It would be next level to have solar panels built in to the bed cover and that would be sweet.

We have heard and seen that the Cybertruck will have the option for solar panels on it.

Another user said if the Cybertruck is going to have air suspension, it may as well make it a heavy duty air compressor to run air tools too.

Elon Musk responded and said that was a great idea. Since it will already have a Tesla pneumatics system, it totally makes sense to add a utility port.

So check on the air compressor.

There were more ideas, including:

These were just a few of the many ideas and comments that Elon Musk got when he Tweeted what people would like in a truck. The great thing about Elon Musk having over 56 million Twitter followers now is that he can get very rapid feedback from customers. For any issue, he is instantly involved and notified of any important issue with a customer.

As a 6'4'' man, I am happy to hear that the Cybertruck will be roomy and I won't likely have my knees getting squished by the front of the truck and I'll be able to sit in the back!

What do you think about the Tesla Cybertruck being able to fit Andre the Giant?