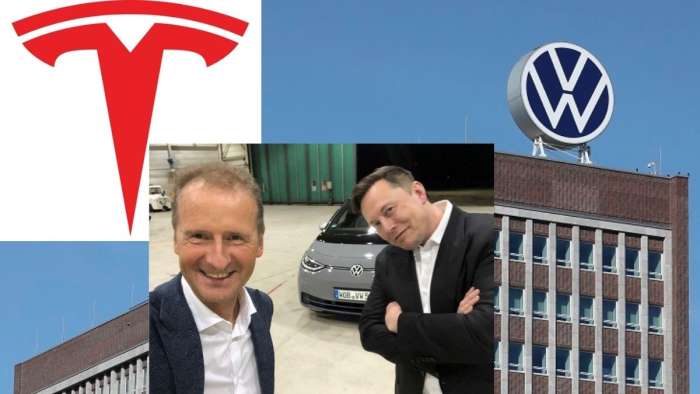 Tesla is Playing a Version of Simon Says with Volkswagen

VW seems to be copying Tesla’s approach in a multitude of ways. Some are saying this could work in VW’s favor. It’s probably too early to tell what the outcome will be for VW or Tesla for that matter.
Advertisement

VW is Redirecting many resources toward EV production

VW has decided to slash 4,000 employees in other departments in order to bolster their resources going toward producing EVs. If VW cuts cars from their existing fleet while their electric models are still in the pre-production phase it could impact the company’s bottom line for a few years. VW seems to see the investment as well worth it. This all out approach from VW may still put them behind Tesla, but still could pay off. Companies that make a car similar to Tesla are bound to get some piece of the pie. If VW can incorporate one or two major features Tesla doesn’t have, then their EVs have a shot at doing well. If VW’s new EVs turn out to be just a watered down Tesla that may not bode well for them

Tesla has been building Gigafactories all over the world. Tesla has been building these factories since 2014. It was during that year that Tesla started construction on their first Gigafactory in Nevada. VW has seen that this Gigafactory model is working for Tesla as Tesla nears completion on new Gigafactories around the world. It has allowed for Tesla to scale up production on many of its models by making millions of battery cells per day. VW is in need of a jolt to their EV program, and they know it.

VW plans to eventually get capacity at these factories up to 240 gigawatts per day. It has one electric vehicle approaching the market in the ID.4. The other models they have planned are at least a couple years out. The thing that benefits VW is that they’re using business models that Tesla had to work on and prefect over a long period. Tesla may be ahead of the curve on EV technology, but they have had to be innovative to garner and retain relevance in the public sphere. Volkswagen seems to think they could expand their profits in Europe as they are also investing in new charging ports.

VW has largely strayed away from copying the appearance of Tesla on both the exterior and interior. VW has touted bringing back the minivan in an electric form for many years now. The I.D Buzz minivan is what this minivan will be called. It is slated to start production in Europe sometime in 2022. Tesla has not come out with a true minivan yet, though the Tesla model X SUV tends to be a pick for larger families as it can seat 7 passengers. VW’s new ID.4 car is similar to the Tesla Model Y as they will both compete in the subcompact SUV segment.

What Tesla could be thinking of these recent moves by VW

Tesla CEO Elon Musk (or ‘Technoking’ as of today) has not spoken on Volkswagen recently. You can read more about Elon Musk naming himself the ‘Technoking’ in this article right here on Torque News.

Speaking of Musk, it would be noteworthy of him to come out with a statement on Volkswagen copying many of his core business operations. Musk does have a close friendship with Volkswagen. It is almost certain that Musk is aware of the fact VW is going to these lengths to copy him.

What this all means for Tesla

By most measures Tesla is currently leading the pack in EV technology. These other companies like VW are having to transition over to EVs from fossil fuels. That in itself is a monumental feat. Some sources have expressed shock that VW has even made it this far. Check out this article about the other EV competitors to Tesla.

How do you see VW faring over the coming years as they roll out many EVs to add to their fleet? Do you think copying Tesla is a wise idea? Let us know in the comments