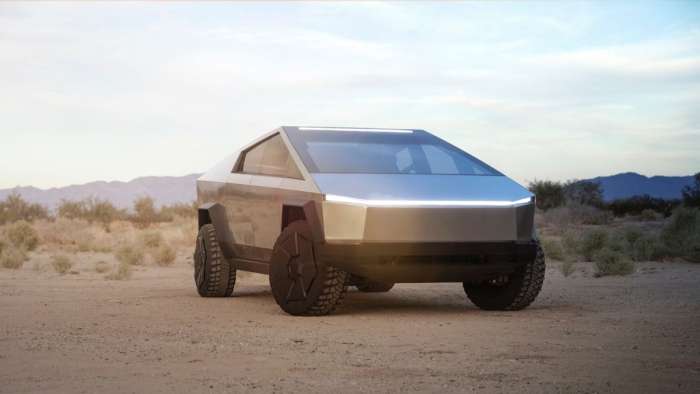 Tesla Cyber Truck Could Power Your RV or House

The Tesla Cybertruck is said to be able to power a camper, RV, or even your home. This comes in an era when going off grid has become more popular. The Cybertruck is slated to start production by the end of this year.
Advertisement

Elon Musk answered a question on twitter about whether the upcoming Tesla Cybertruck can power a tiny house. Musk answered and said yes in his response to the question.

We know the Cybertruck is durable

Based on information that has come out, potential buyers can get an idea of the durability of the Vehicle. The truck should be able to pull most campers with ease. It somewhat remains to be seen the wear and tear the Cybertruck will endure pulling a camper on trips for thousands of miles. The Ultra hard stainless make it even more durable. There have been some conflicting opinions on the stainless steel. Apparently, some tests were run on the stainless steel, and it wasn’t unbreakable, but it still performed well. The roof of the Cybertruck will make rollovers less of a problem.

Check out this article from yesterday which talks about Tesla ratings and mentions a possible competitor to the Cybertruck. The durability and usefulness mean it is possible the Cybertruck will also been seen on construction sites.

Questions about the power system

Off the grid living isn’t anything new. Off gridders have worked with solar panels for quite a while. Possible issues need to be looked at when plugging a camper into the Cybertruck. What are the limitations as to how much power can be produced? It seems there could be limitations on the size and scope of a house or camper that the Cybertruck can power. This isn’t being marketed as something that can fully power a 4 bed, 3 bath home, which isn’t a problem, though it would be nice to learn more of the specifics before deciding to invest in a Cybertruck.

The Tesla Cybertruck is new to off grid living though which leads to the next point. It has been said that a 240v outlet could be used. This article in Benzinga has said that the Cybertruck could power some tools, a small house, or even parts of a larger home. Answers and updates concerning some of these questions and other questions are probably inevitable before the Cybertruck is released

RV Community has embraced the Cybertruck

This could be seen as somewhat unexpected. It depends which types of people in the RV community are the types that would invest in a Cybertruck or other Tesla product.

Wiil The Cybertruck arrive on Time?

This is a major question mark. The Cybertruck is scheduled to be built at the new Gigafactory in Texas. Tesla is trying to release their new Semi Truck which is already behind schedule as mentioned here by the end of this year also. It isn’t the worst thing that these products have been delayed, and not just rushed to market, though time is ticking and it would be Tesla’s best interest to get these products out soon.

Consumers shouldn’t get too excited about any of these products just yet. They are still in the pipeline and need to get to production. The logistics of that are still being worked out. The good news is that Elon Musk and Tesla have a track record of not releasing their products until they’re fully polished to avoid public backlash in the event that there were mechanical issues.

DeanMcManis wrote on March 14, 2021 - 11:57am Permalink
Tesla has been pretty quiet about providing V2G (vehicle to grid) capabilities that other automakers like Lucid Motors have promised. In the Cybertruck's unveiling in 2019 they showed the Cybertruck having both 110V and 220V outlets for power tools, lighting, and powering a trailer. I think that tesla has been quiet about the Cybertruck's V2G capability because they do not want to slow sales of their Powerwalls while buyers wait for V2G capability in their EVs. But with the recent Texas power outage we knew that they would at least mention the Cybertruck's vehicle to load capabilities, that would potentially power a trailer or tiny house off-grid. So this is a very good confirmation about that capability.