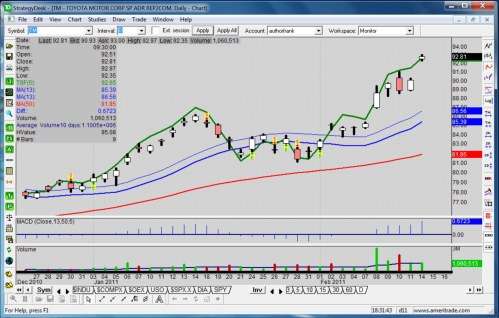 Toyota stock flying high since being cleared for electronic flaws

Since Toyota (NYSE: TM) received a clean bill of health that ruled out electronic flaws, the market has rewarded the stock with higher highs and higher lows.
Advertisement

One look at the chart and you immediately see an unusual island gap; in this case, a double gap, which is extremely bullish.

For the record, most island gaps have the latter bar gapping to the downside, and that is bearish. Not so in this case.

Another a cause for the shares rising was Toyota's announcement last Tuesday that it had raised its full–year earnings and sales forecasts because of booming sales in China and other high–growth markets.

The lingering question was whether there was a problem with the electronic systems in Toyota cars, which resulted in recalling more than 12 million vehicles around the world for a range of defects dating back to late 2009.

A confirmed defect would have signaled an additional massive recall and a huge problem for Toyota stock, which had already taken a major hit. It would further shattered the sterling image for quality production that Toyota had boasted literally for decades and allowed it to take market share away from American automakers.

There are some, like Neil Cavuto of FOX, who think Toyota deserves an apology from the US government. I'm not in that camp.

While it's good that no electronic flaws were found, there were flaws in accelerator pedals, not to mention the not-so-robust clearance to the fllor whcih enabled fllor mats to interfere in some cases.

Fact is, Toyota was fined for its failure to follow government procedures with flaws that were deemed legitimate.

Will Toyota stock rise to its $130 pluslevel achieved in early 2007?

Nobody knows that for sure, but the chart technicals are confirmed as bullish at the movement, with the stock trading above the 13-day channel and the 50-day moving average.

Not so fast with that government apology to Toyota, Mr. Cavuto
Big 3 salaried workers to receive huge bonuses
EIA projects gasoline retail prices to average 3.15 per gallon in 2011
How to handle your next auto recall
Auto industry compromise with expensive EVs fails the masses
Stop-start technology to advance more micro hybrids by 2016