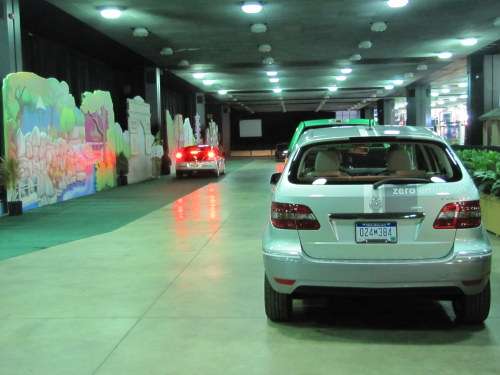 CNBC’s Erin Burnett just gave a short interview with Shai Agassi in Davos at the World Economic Forum about his startup, Better Place, and his opinion of electric cars in Israel.
Advertisement

It’s been written that Israeli-born Shai Agassi is much more than a car-part inventor or a lithium-battery whiz: He's an electric-car prophet.

Denmark, Australia, California, Hawaii, and Ontario have followed suit. Today, Agassi and Better Place are in discussions with many countries, carmakers and other potential partners around the globe.

Agassi’s visionary leadership with the Better Place model has been recognized widely. TIME Magazine named him to the 2009 TIME 100, the world’s 100 most influential people, and one of TIME’s “Heroes of the Environment 2008.”

From Davos, Agassi is extending his proselytizing for the infrastructure necessary to make electric autos a mass-market success.

According to the website, BetterPlace.com, the options are plentiful. You can switch your spent battery for a fresh one in less time than it takes to fill a tank of gasoline. It encourages visitors to see how Tokyo's electric taxis stayed charged on the go using a battery switch, only from Better Place.

Then it says to check out the Renault Fluence Z.E., the first switchable-battery electric car designed for the Better Place network. The in-car software delivers an unparalleled driving experience.

Finally, you're invited to the Better Place Center in Israel, where you can test drive an electric car on a dedicated track, and virtually experience a world free from oil. Also coming soon in Copenhagen and Toronto.

Fact is, after a successful run of high-tech and computer-related innovation, Israel is now focusing its ambitions on the next big thing — preparing the world for life without coal and oil.

Israel currently pays about $8 per gallon of gasoline while America is approaching $4. So, it is driving to become a world leader in alternative energy, with the government throwing its support behind cutting-edge technologies. As a result, the number of private entrepreneurs entering the so-called "clean-tech" sector has swelled dramatically.