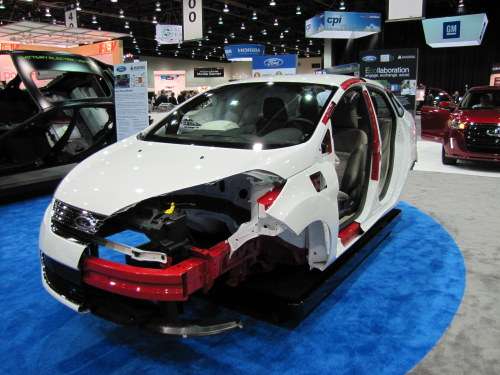 While most reviews of the Insurance Institute for Highway Safety's (IIHS) Top Safety Pick award for 2011 seem centered on who made the list, some have astutely noticed the emphasis on electronic stability control, a crash avoidance feature. Fewer, though, have concentrated on the criteria behind the weakest point of an automobile - the roof.
Advertisement

Last year, the Institute toughened criteria for Top Safety Pick by adding a requirement that all qualifiers must earn a good rating for performance in a roof strength test to assess protection in a rollover crash. According to the IIHS News Release, the move sharply narrowed the initial field of 2010 winners.

Fact is, avoiding a crash is viewed by the government and the auto industry as a major consumer win; hence the drive for adding more electronic stability controls as part of the criteria.

However, there are those times when crash avoidance is impossible. For those special moments, especially when a rollover is involved, the ability of the body structure to contain its occupants in position while absorbing and redirecting crash energy is crucial.

Design engineers use digital headforms with zones to predict how far a roof structure may crush and still protect the occupants. Proof, though, is always in the testing.

For the record, the 2010 SAE World Congress in Detroit last spring showed some super displays of body structures using high-strength and boron steels. Likewise, some displays at the NAIAS took the opportunity to show the public its emphasis on safety.

This year, Ford is rolling out a new design for its popular Explorer midsize SUV, which until now had never earned Top Safety Pick. Ford also upgraded the roofs of two other midsize SUVs, the Ford Flex and Lincoln MKT, along with the Ford Fusion and Lincoln MKZ, both midsize cars that missed the initial round of 2010 winners because they lacked the required roof strength.

The all-new Ford Fiesta rounds out Ford's winners and is the only minicar to earn Top Safety Pick this year. It was one of the displays at SAE (see photo).

Not to be left out, General Motors' new Chevrolet Cruze has 10 standard airbags, including ones for the knees, and outperforms the government's minimum roof strength requirements.

Most notable in the release, though, was Volkswagen. Their redesigned Volkswagen Touareg is the only large SUV to earn Top Safety Pick for 2011. Point is, the Institute doesn't normally evaluate SUVs this large, but Volkswagen requested crash tests to demonstrate the Touareg's crashworthiness. Talk about pride in their product.

So, it appears safety is in for 2011 and beyond, perhaps more than gas mileage, which is a win-win for consumers.

Keith Griffin wrote on December 22, 2010 - 2:48pm Permalink
Statistically, the number of rollover crashes is pretty low and becomes even less likely with stability control. People don't die because of weak roofs. They die because they're not wearing seatbelts. Also, IIHS and NHTSA can't agree on a standard. IIHS wants roof to support 4 times its weight while NHTSA seeks 2.5 times. Either way, seat belts and stability control are more important.
Hair extentions wrote on August 12, 2011 - 9:12pm Permalink
Great blog ! Thanks for sharing!