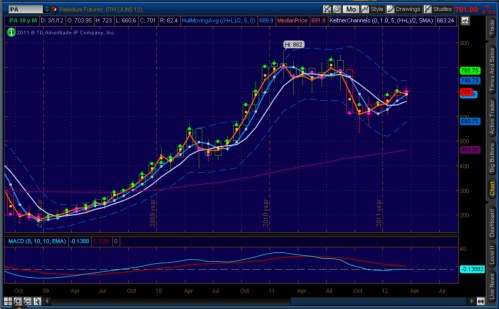 While gold and platinum appear to be in the news more, investors would be wise not to disregard palladium, as the connection between auto sales and palladium is still strong.
Advertisement

It is true that some analysts had cut their outlook for palladium prices in 2011, but this is 2012; and the auto industry still consumes about 60 percent of the metal’s annual supply for use in emissions systems.

An article by Palladium Investing News last October had some analysts downgrading palladium from $825/oz to $785/oz. Fact is, the metal broke well below that. One look at the monthly chart of the commodity and you will see the following:

- Palladium has since been on a bull run to its present price of $701 per oz. for the June contract.

That means optimism for the metal in 2012 has far from dwindled. Some even think this year is a new chapter for palladium, especially since the metal tends to respond to economic data.

A separate article in Palladium Investing News entitled, “Palladium’s Strong 2012 Start” pointed toward a Bloomberg report that the estimates of 28 analysts forecasted a median average price of $882.50 for palladium this year.

Then the article pointed toward a Reuters poll of 28 analysts conducted in July 2011 which indicated a possible strong year with a median forecast of $868. However, it backtracked later as Reuters now says that analysts have scaled back their expectations and expect prices to struggle. With updated responses toward an average price of $725, it is lower than 2011′s average price of $748. Still, that’s higher than present price.

The newsletter then named A-1 Specialized Services & Supplies which publishes a platinum review three times a year. Its January 2012 report points to a pattern that suggests palladium’s performance may be seasonal. Well, so is the auto industry. Duh!

Regardless of all this input, the auto industry is a key element in the supply-demand equation for palladium. A simple fact is, America and China are still gasoline-dominant markets, despite all the rhetoric of electrification; meaning their exhaust systems are still palladium intensive. Perhaps that is why Barclay’s Capital projects the auto industry will use 6.22 million ounces in auto-catalysts this year alone.

Should You Invest in Palladium?

That is up to you; but if you were looking for an alternative investment to platinum, gold and silver, with a direct link to the auto sector, then palladium metal just may be a worthy candidate to consider. Just be sure you understand the nature of its volatility profile as noted by its price dynamics.

As a futures trader as well as a stock investor, I personally prefer options for longer-term positions, simply because the risk is defined and capped. Nonetheless, for a short-term trade, I will use the futures whenever I deem it appropriate. It comes with my speculator mentality. While I do not own any contracts for palladium, I am looking at the chart for opportunity.

And for those who prefer exchange traded funds, also known as ETFs, you have ETFS Physical Palladium (NYSE: PALL) which closed last Friday at 69.02. Be apprised, though, there are no options available on this particular ETF, which means there is no way to play the short side or hedge. If I do find a good hedge, I'll add it in the comments below and update the article.

Frank Sherosky wrote on March 18, 2012 - 9:25pm Permalink
For a single stock choice, Stillwater is a leading PMG producer and the only significant primary producer of palladium in the Western Hemisphere. Its common stock is publicly traded on the NYSE under the symbol SWC and on the Toronto Stock Exchange under the symbol SWC.U.