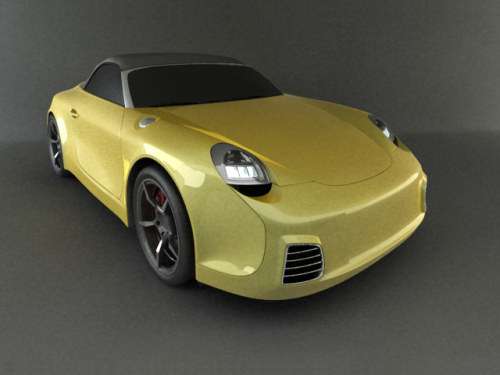 Modernized 356 Porsche envisioned by a designer from Armenia

Thanks to freedom of expression, education and global communications, industrial design ideas now come from every part of the world, like the modernized 356 Porsche envisioned by Tigran Lalayan of Armenia.
Advertisement

The 356 Porsche is a classic. So, any attempt to modernize the design even slightly is a tall order.

Design is a major venue within the auto industry, especially in Detroit. So, when I see young talent from somewhere beyond the Motor City, I especiallty pay attention. Such is the work of Tigran Lalayan from Armenia.

Up to today, all I had known of Tigran’s work was from an article in another web magazine. It showed a custom version of the 356 Porsche. Preliminary sketches were followed up with a digital model of the roadster.

After an initial contact email, I have now discovered that Tigran also designed a coupe version which the magazine did not show. More on that in the photo section below.

The Porsche 356 was first production automobile for Porsche as a company. It was a lightweight and nimble handling rear-engine rear-wheel-drive 2 door sports car available in hardtop and convertible configurations. Design innovations continued during the years of manufacture, contributing to its motorsports success and popularity.

Tigran’s redesign so reminds me of the skills that many will see later this week at the Autorama 2011 in Detroit. Hot rod and custom show cars will fill Cobo Center for all to enjoy. I dare say that Tigran’s design would be a welcomed entry.

His 356 Porsche was rendered as a 3D model of the Speedster. Modeled in 3ds max 2008, he rendered it with V-ray, postwork Photoshop cs3.

As I wrote earlier, it is not easy to keep the original theme of an older design and make it modern. For the record, this 356 Speedster is designed as an entry level Porsche, for those who are new to the brand. He used the traditional engine composition: just behind the rear axle in pair with rear wheel drive. Small engine capacity and the use of KERS technology are the keys for increasing the fuel efficiency.

The body shape is inspired by the original 356 Speedster. The key elements in the design are the low windshield, the oval headlights and circular rear lights. To keep the spirit of a speedster the roof is hand operated.

Tigran was also kind enough to send me some images showing his latest work and model in progress. Since it's a collage, I prefer you to see Tigran Lalayan- Skoda H4 Project. These are the first sketches of his Skoda project, the H4, a mid-engined sports car with four-wheel drive. It shares the platform with VW Bluesport and Audi R4.

How this coverage came about

When I was in high school, my own desire was to attend Art Center College in California. It was a major expense. Unfortunately, family finances and the military pressure of the Vietnam era, despite being a sole-surviving son of a WWII navy veteran, held a heavy sway on decisions.

I did, however, after many years get to work at the GM Design Studio, but as a studio engineer, acting as the engineering conscience of the designers whether they wanted it or not. Fact is, I deem the entire experience the highlight of my 39 year career.

So, I have respect and an appreciation for the designers, and their visionary and artistic abilities. Unfortunately, too many are overly focused on art and not enough on practicality or build ability. That I fault the educational system more than the designers. It takes a certain balance within the mind of the designer to be true to industrial design.

When my editor, Armen Hareyan, first pointed me toward covering this young designer I did not hesitate. Fact is, I have always admired the works of artists, even if I held contrary personal opinions.

After an initial Facebook message, Tigran wrote back to me and confirmed that both the sketches and the 3D renderings for the 356 Porsche, as well as the materials and the model used to render, belonged to him (no team work).

I might make this a monthly or bi-weekly segment at TorqueNews.com. It will provide everyone the opportunity to see individual works as well as those created by teams of designers at the automakers. Tell me what you think in the comment area below.