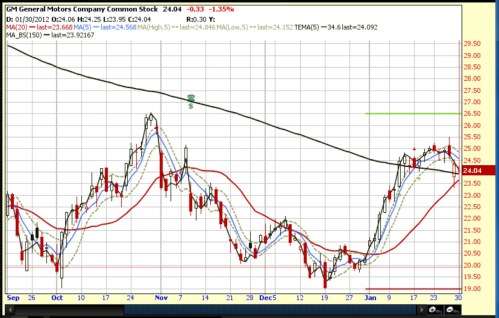 After riding the wave of NAIAS 2012 to higher ground, General Motors Company (NYSE: GM) stock has once again started to show a lack of new buyers coming in. Perhaps the upmove since early January is merely taking a breather, awaiting more news like an earnings report.

Still, just looking at the daily chart provided, you are once again reminded that stock price dynamics as told by price-time charts do not lie. Based on the philosophy of W.D. Gann, the legendary trader, the tape is the only truth you ever get from the market.

Now that NAIAS 2012 is over, GM stock looks to be following the direction of the general market by moving lower; not to any great degree, but the trend upward has at least for now been stalled. Question is, why? Is there another reason than just taking a pause to catch its breath?

Fact is, GM has no real new news coming out that might drive it upward, except that recent target target price of 31.70 per MarketWatch.com. A surpirse on the next earnings report would certainly help. In the meantime, the MA20 (20-day moving average) above the MA50 (50-day moving average) is a good supporting sign as is that double bottom price pattern.

While the drive to get the marketing machine back in place for the Chevy Volt is in gear since its clean bill of health from NHTSA, though, fact is the Volt is not a major contributor to profits at this point in time; and may not be for many years at the rate it is going.

This is not a negative on the technology at all. However, the electrification of the automobile is too expensive for the masses. So, automakers like GM are looking at hybrid versions in an attempt to get electrification and price tot eh point of affordability. Even Ford is bringing its EcoBoost in line with its electrification to create a Prius fighter. That is the only way to build up volume which can avail profits.

GM needs to do the same with its Eco models for the Chevy Cruze and Malibu, but the Ecotec engine still needs to become more like EcoBoost in the manner of turbo boosting and promotion. At least GM has Buick’s eAssist™ and that could be expanded to Chevy, provided the cost isn’t too high.

In my opinion, GM is behind Ford in this area of IC engine efficiency image; and the only way top leap ahead is to bring out that HCCI engine it has in its labs; better yet it needs to develop a version of the Scuderi or Tour split-cycle engines. More nat-gas options would help its image a lot, too. Imagine a nat-gas Cruze or a nat-gas Volt.

Point is, instead of focusing on an Eco label for the window, GM needs to show not talk its way about green; and it needs to do it in a manner that is truly affordable for the masses. In the meantime, the taxpayer investment is still losing money at this point with stock this low; meaning, the government cannot get fully out of GM stock without first incurring that loss.

Likewise, that downtrend line has been breached to the upside, but the daily bars are tracking the line including the 150-day moving average as though it was a fence.

Also for the record, that blue line representing the opening price of GM stock at 35.00 on its IPO debut just 14 months ago is still way ahead of GM’s present price of 24.37 based on Friday’s close. So, if 31.70 is a target, then traders may in fact be taking a breather on their way toward that end.

Recall last time I wrote, though, until the charts tell us something new, all we have are support and resistance based on recent trading which is what really counts in the hearts and minds of many traders anyway. On the upward resistance, that swing high of 26.55 is still intact with an even lower swing high of 25.50. That means GM stock will have to penetrate those levels of resistance before it ever attempts to breack that target set by analysts.

So far, though, the 19.05 level was tested creating a double bottom, which appears good for stock buyers, as it indicated two separate occasions where buyers came in. Clearly, 19.00 is strong support. Only a major bad news on the GM fundamentals or a general market downturn will likely retest that level; but it is still not out of the realm of possibilities.

On the other hand, with the charts and levels of overhead price resistance, one would hope the stock can rise beyond the analyst target and at least make the IPO level so the government can get our money back with at least a breakeven.

Toyota's First EV Will Have a Name of BZ: Toyota BZ
First Videos From Inside The Boring Company's Las Vegas Loop
END_OF_DOCUMENT_TOKEN_TO_BE_REPLACED