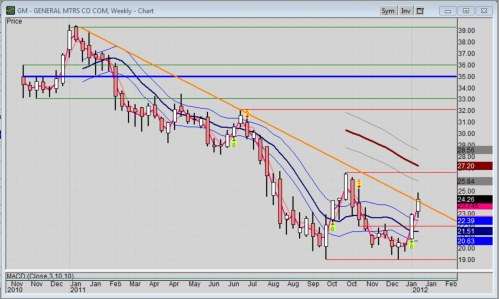 With a double bottom already in place at the $19 area, General Motors (NYSE: GM) stock is breaking above a key technical downtrend line. Question is, can GM stock ride the wave of NAIAS 2012 to higher ground?
Advertisement

Stock price dynamics as told by price-time charts do not lie. In fact, in November I was reporting how General Motors Company (NYSE: GM) stock had followed the direction of the general market by moving lower; but in the GM stock’s case, took a dive past price support one day before Option expiration Friday. A few weeks later in December, GM tested the 19.05 with a new low of 19.00.

Today, GM stock is riding a wave of new product reveals at the NAIAS in Detroit. That includes the new Cadillac ATS, which was revealed, not at Cobo Center, but at the Center for Creative Studies the night before the official Press Review. It is indeed a smaller car that will compete with the BMW 3 Series. Question is, how well? And, as a downsized CTS so to speak, how much will it cost relative to the larger CTS?

Of course, GM had its large set of displays inside Cobo Center. There were multiple introductions, including the following:

In addition to the attached photo gallery on Cadillac (see below main image), click here for the second gallery, Chevrolet Displays at NAIAS 2012 Press Preview

Also, here are two video sampling of a few displays.

Despite the good showing by GM at the LA Auto Show a few months previous with the Chevy Sonic, Chevy Spark, Camaro ZL1 and the Cadillac XTS, realize that GM no longer builds its volume in America anymore. Fact is, according to the Quarterly Report on Form 10-Q, in the nine months ended September 30, 2011, 72.0% of GM vehicle sales volume was generated outside the United States, including 42.6% from emerging markets, such as the BRIC nations, Brazil, Russia, India and China, which have experienced the industry's highest volume growth.

That automatically places GM at the mercy of non-U.S. economies; and the sovereign debt situation as well. Recall that General Motors stated its third-quarter earnings fell 12% as the auto maker's operations outside of North America struggled to get traction.

So, what’s next for GM stock?

I watched the Red Carpet Charity Preview last Friday night which raised over $3M for local children charities. On that night, GM CEO Dan Ackerman was interviewed by Channel 7’s Mary Conway. Ackerman noted that this was his third NAIAS in Detroit. The first was rather subdued; 2011 was better; but 2012 is a major increase in upbeat attitude and crowd exhilaration.

However, I noticed that Ackerman was not giddy in any way, despite the excitement at NAIAS 2012. In fact, he appeared quite subdued in my view; almost a man who was still so focused because he is still aware of the realities. GM still owes a ton of money to the US government; and competition is getting more keen with all the foreign competitors increasing production inside America. He made no surety about expectations either on industry production, but stated that 14 million industry units was possible based mainly on pent up demand that has developed over the last decade. Point is, cars are getting older and will have to be replaced soon. He, of course, hopes that to be a GM product.

The daily chart is telling us the trend bias of GM stock is still bearish based on the 50-day moving average below the 150-day moving average. However, the weekly chart (shown above) shows the longer-term trend down is also intact, based on that orange trend line. Also for the record, note that horizontal blue line represents the opening of GM stock after its IPO in November of 2010.

I noted last time I wrote that until the charts tell us something new, all we have are support and resistance based on recent trading which is what really counts in the hearts and minds of many traders anyway. On the upward resistance, that recent swing high of 26.55 is still intact. Even the 19.05 low in the short run has been breachedby a lower blip at 19.00, then went upward from there. Now, GM stock closed Friday at 24.26, a tad above a major trend line.

This double bottom is good for stock buyers, as it indicated two separate occasions where buyers came in. Clearly, 19.00 is strong support. Only a major bad news on the GM fundamentals or a general market downturn like a skirmish with Iran looks to test that low again.

On the other hand, with the charts and levels of overhead price resistance, how far might GM stock rise?