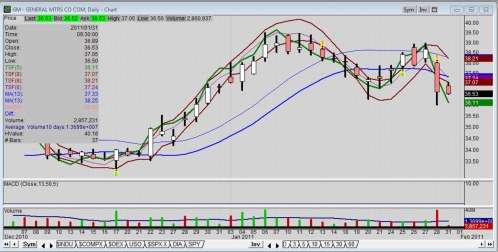 Despite the rebound move just before the State of the Union Address, General Motors (NYSE: GM) is showing weakness from Friday's close, even after the first hour of Monday morning trading.
Advertisement

As of 10:30 a.m. GM stock traded up at the open relative to Friday’s down close. It didn’t take long for the stock, like Ford (NYSE: F) and other auto stocks, to be subject once again to the lowering of the general market tide.

Still, the U.S. dollar’s impact on other world currencies has had a major affect on commodities, which are affecting global food and energy price; of which are priced in dollars.

For the record, auto stocks rise and fall on currencies, commodities and energy, not to mention civil unrest and government interventions. Still, a falling dollar means it will cost automakers like GM more money to purchase raw materials.

GM’s riding of the wave from the 2011 North American International Auto Show in Detroit will have to be replaced by some other good news to awaken the trend. Then again, any world disorder as in Egypt is disruptive to most economies.

Although the recent introduction of the Chevy Volt, the new Chevy Cruze and the Chevy Sonic were received quite well by the media and the visitors at the Detroit Auto Show, stock investors are forward looking by nature.

From a technical chart perspective, though, price dynamics lead the way for forward-looking interpretations. Note the price trend bias from the lower left date of December to the upper right: that’s still bullish despite the recent sell-off, where the latest cycle low and support of 36.27 was tested as recent as Friday and has been reset to 36.01.

The next level of price support is in the 35 area, where the breakout to the upside occurred in December. For the record, there have been no extreme volume days lately except for Friday‘s major down move.

Investor’s are cautioned to watch the market action relative to global political events, as any oil spike can affect auto stocks severely.

In the previous chart report, I questioned at what price level will buyers come back in to GM during the option-week sell-off. While I noted support could be found as low as 35, the close of the Dec. 22nd breakout, it came in the 36.27 level and Friday‘s lower 36.01; which still stands as of this writing.