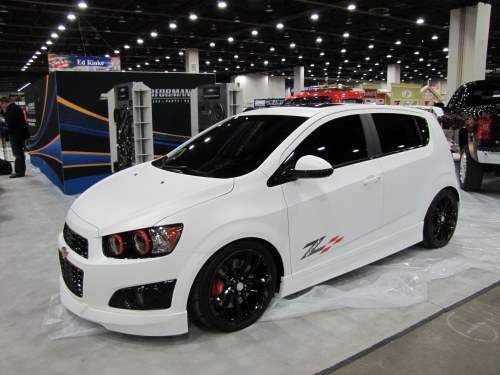 The original equipment manufacturers like GM Performance, Ford Racing and Mopar have taken an active roll in the 60th anniversary of the Detroit Autorama.
Advertisement

Recall when the automotive competition in the 1960s were mostly from other American automakers. Well, at the 2012 Autorama which is celebrating its 60th anniversary, that is still the case.

As of Thursday evening, the last set-up night for this year’s Autorama, the display for GM Performance was strategically placed in the middle of the floor; no surprise, since GM Performance Division of General Motors is a major sponsor.

This is not the first, nor will it be the last display by Performance Division and Performance Parts display. Recall its spot at the Woodward Dream Cruise located at Memorial Park on the NE corner of Woodward and 13 Mile Road. The display there included a collection of classic engines and modern crate engines. Attendees were able to watch professional engine builders from the GM Performance Build Center in Wixom, Mich., disassemble and reassemble a Chevrolet Corvette ZR1 engine, and see how the masters do it.

Especially recall the E-ROD emission-compliant 1955 Chevy Bel Air hot rod which was also featured at Woodward, along with other concept, classic, and current hot rods.

This year’s Detroit Autorama, though, is a different kind of display; more on the floor types, but still with the general theme - high performance. Chevrolet, for example, included some tricked-out looking Chevy Sonics. I dismissed the video because the display still had plastic all over the place. So, I 'll revisit Sunday night. In the meantime, check out the video I did shoot.

Not to be outdone, though, Ford Racing was present at Autorama with its huge truck hauler and a an array of high-performance and racing products. The sign at the top especially displayed a fact that not too any people may have been aware: This is Ford 110th year in racing.

At the Ford media site, for example, Biffle, Puccia and Almirola talked about the Daytona 500 which begins Sunday, Feb. 26th. Greg Biffle, driver of the No. 16 3M Ford Fusion, has had a fast Ford all week long and will start Sunday’s Daytona 500 on the outside of row one. Biffle, along with his crew chief Matt Puccia, also talked to Ford Racing following the first practice session Friday at Daytona International Speedway about why they have been so fast and what they worked on today.

Chrysler, Dodge and the Mopar Brand

Of course, where there is GM and Ford, there has to be Mopar. The parts division of Chrysler may be owned by Fiat far more than it was in its hey day, but its core DNA is still red-blooded American Mopar.

For the record, Mopar is celebrating its 75th Anniversary! From humble beginnings in 1937, Mopar has risen to be one of the most recognizable brands in the automotive industry. And a good part of our popularity is due to the fans, helping turn Mopar into a brand unlike any other.

One look at that Challenger SRT, though, said it all, not to mention the other black Dodge Chargers that were on the floor.

Bottom line: When it comes to high performance competition, it is always game on in Detroit.

Toyota's First EV Will Have a Name of BZ: Toyota BZ
First Videos From Inside The Boring Company's Las Vegas Loop
END_OF_DOCUMENT_TOKEN_TO_BE_REPLACED