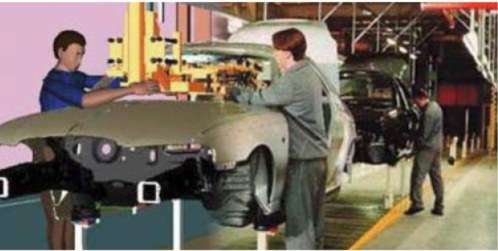 Like the motion-capture technology covered by Torque News at SAE World Congress, Ford is using similar but more sophisticated, multinational avatars like Ford's North American virtual workers, Jack and Jill, and now reflects the sizes and shapes of workers at assembly plants across the globe.
Advertisement

The reason centers on Ford increasing its presence in Asia, Africa and other markets. Thus a digital employee undergoes ergonomic assessments that use Hollywood animation technology to get a head start on virtual assembly lines, reducing the physical stress of jobs and improving quality.

According to the latest news release by Ford Motor Company (NYSE: F) out of Dearborn, Michigan, its avatar resembles the sophisticated versions inspired by Hollywood for mixing physical actors with animation. So, what we have here is a digital worker.

"Ford is a leader in virtual technology," said Allison Stephens, Ford ergonomics specialist with Vehicle Operations Manufacturing Engineering. "We combine Hollywood's motion-capture technology with human modeling software in our Detroit labs to design jobs in Asia and around the world that are less physically stressful on workers. We adjusted the sizes of our Jack and Jill models to reflect the populations at our global plants so all our regions can benefit from what we've learned."

The new avatar was created using size and shape population data gathered from Ford assembly plants across the globe. By customizing these data, Ford researchers have created a manikin used in ergonomic assessments that employ motion-capture technology, the same type of technology that mesmerizes filmgoers in movies such as "Mars Needs Moms" or in games such as "Mortal Kombat."

As Ford has added assembly plants around the world, Stephens said, it was imperative the new manikin be standardized to give clear engineering direction while continuing to raise quality.

The digital manikin's first global assignments are for new products planned for new assembly plants in China, the new Focus being assembled in Germany and the U.S., and the global Ranger being built in Thailand and South Africa.

The new effort is expected to help Ford continue impressive quality gains around the world. In North America, Ford has matched or beaten industry leaders in many independent quality measures. Ford also is seeing significant improvements in its European and Asia Pacific and Africa operations.

Jack and Jill Are Not Lucy, Fred and Ethel

Jack and Jill are examples of the versatility of digital design. As part of Ford's product development, the ergonomic data they provide are handed off to the virtual build arena, where a program team – designers, engineers, suppliers and line operators – assembles a vehicle part by part, virtually.

This happens long before the first physical parts are produced and a prototype vehicle is built. In fact, the virtual build takes place even before Ford and its suppliers install tooling and set up workstations.

In the virtual build event, Jack and Jill assemble the vehicle part by part on a wall-sized computer screen as the program team scrutinizes the vehicle's manufacturing feasibility; i.e., how well the parts go together in the assigned sequence and at the specific plant where the vehicle is to be produced.

"We need to have all four regions of Ford using the same manikin," said Stephens. "Because we're building global vehicles, we need to have one engineering direction. That's what we have done."

To determine the new dimensions of the modernized Jack and Jill, Ford North America and Ford of Europe collected data from their operators in six assembly plants around the world – Mexico, Spain, China, Germany, England and the U.S.

The data were then analyzed by a researcher at Penn State, who determined a dimension that would reflect Ford's global worker population. The global worker population is larger, taller and heavier than the original – a 5-foot-4-inch female global manikin was determined to represent the smallest individual found in a global Ford facility.
The standardized manikins can then be customized to the regional Ford population that is building a specific vehicle.

"This is a very important move, because now everyone has the benefits of our high standards," said Stephens. "We're matching our job demands to our worker capability, so our assembly workers benefit, and because they can do the jobs correctly and well, our quality benefits. In the end, customers get the benefit of our improved quality."

The benefits, however, will improve as the company continues with the technology and builds on its success. Ford headquarters in Dearborn, Mich., and Merkenich, Germany, for example, have motion-capture technology labs where new ergonomic studies can be performed as new vehicles are designed. Visualization centers are being developed for Ford Asia Pacific and South America with 3D television sets.

"If we do ergonomic studies for those places, we can simply send them the files and they can watch the studies in 3D; they won't have to go to the expense of building their own motion-capture labs," said Stephens.

Soon, too, the advanced manikins will have a friend, Santos, a computerized avatar now in the testing phase at Ford. Santos was created for the U.S. Department of Defense as part of the Virtual Soldier Research program at the University of Iowa; the military employs Santos to find ways to ease the physical strain on soldiers.

"Santos will be employed on highly demanding jobs that require many muscles to be analyzed at the same time," said Stephens. "This type of analysis has never been done before. We are excited to have Santos join the team."