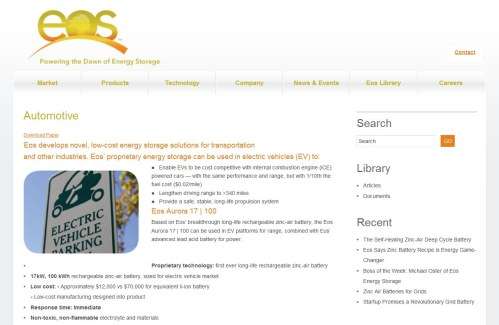 In a TorqueNews exclusive interview, Steve Hellman, president of EOS Energy Storage, a fairly new entity in the grid storage arena with a viable zinc-air battery technology, is also proposing zinc-air as a viable solution to the four limitations that shackle today’s electrification of the automobile. Thus, the company is looking for strategic partners in 2012.
Advertisement

When the first automobiles were invented, none were using gasoline, because steam was the dominant power plant of the era. In fact, there was no gasoline as we know it, only syn-gas. Of course reality began to set in as the masses viewed the new contraptions as unsafe, lacking power, lacking range, lacking fuel sources, and costing too much money.

Over time, other options came into play as well which addressed the limitations, like an electric with a lead-acid battery, and another syn-gas then gasoline-powered, internal combustion engine car. Still, the fears abounded, but the better value and practicality won out with the IC engine and gasoline. Sound familiar?

He was quick to point out his amazement, appreciation and similarity in philosophy within my article, Will zinc-air batteries ever replace lithium-ion for long-range EVs?. It sparked something in him to write me an email; and thus the interview came out of that communication.

If there is one part of the EOS Energy Storage philosophy that rings true, though, it is this: The energy grid is the only commodity system that does not have any storage of its own energy production. Only hydro-power comes close with dams of water, but that is before the fact.

The EOS Energy Storage website reveals another philosophy worth noting: It is keen enough to render a proposal for automobile use, but with the same storage technologies - zinc-air batteries and lead-acid batteries. If that doesn’t catch your green eye, then nothing will.

This time, I’m not proposing a modified IC engine like the Scuderi or Tour split-cycle to replace lithium-ion propulsion, but a modification of an existing battery technology used in hearing aids and navigation devices.

When you think about it, though, the very same limitations that surrounded the early automobiles have emerged once again in our era with the electrification of the autombile. They are as follows:
1. Cost
2. Driving Range
3. Safety
4. Refueling or Rechargability

COST is obviously a value proposition which many EV owners like to point toward. Problem is, value needs a reference to something, and that something in this case is an IC engine vehicle. Forget about the sales price for the moment. A Chevy Volt lease with its lithium-ion power source is in the range of $400-500 per month. Value? Well, that’s in the eyes of the purchaser, because another purchaser cannot justify the additional expense despite the so-called savings in gasoline.

A Chevy Cruze with a lease of $210 per month plus gasoline might be economically the better value for another person. What we really want, though, is an EV that costs no more than present IC engine cars, and without the need for subsidy via taxpayers.

Yet, despite all the hoopla and rhetoric that volume will bring the price down, fact is, that is wishful thinking. Reason is, cost for electrification of the auto is tied directly to lithium-ion, an expensive commodity in limited supply, especially in America.

The fact America is a major supplier of zinc, though, carries a lot of weight in this area; meaning, the cost reduction is significant; and, like gasoline, uses the surrounding air as its catalyst. Even if lithium was used as a metal-air battery, it would still suffer the cost disadvantage.

DRIVING RANGE is the real stickler, though. A Chevy Volt handles this issue by always driving electric, but electric-only for the first 35-40 miles, while the rest of the range has to be extended by the generator engine which feeds the battery as you drive. Other full EVs like the Ford Focus EV and the Nissan Leaf have a range of 100 miles, but need a fast charge from somewhere to complete a long trip. And Tesla has range, but the cost is beyond most pocketbooks, which gets back to the first point.

The proposed zinc-air battery tech of EOS Energy Storage would have a much longer range than lithium-ion within the same battery volume, as in 340 miles, equivalent to an average IC engine. For the record, packaging volume seems to be somewhere in the 300 liter area, as noted by Hellman and his accounts with various OEM engineers. His vision for the next generation of zinc-air is to be half of that.

SAFETY is always a consideration, as it should be. Fact is, even gasoline engines have a record of multiple fires, but it is still deemed acceptable; while a single fire involving a single Volt induced by government testing gets most of the press. Yes, hypocrisy abounds.

For certain, though, zinc-air is safe and has no toxicity involved, as the main components are zinc and air, and a unique electrolyte with a chemical similarity to liquid toothpaste.

REFUEL CAPABILITY is next. Nobody wants to give up their life’s pace that includes less than ten minutes at the gasoline pump. Well, with zinc-air, that is a distinct possibility, because the new tech of EOS Energy has the zinc-air battery capable of being electrically recharged; a feat that was a major hurdle just a few years ago. The fuel, zinc, can also be rendered in a colloidal suspension within a fluid electrolyte which can be refilled much like fluid gasoline.

The four noted limitations seem to say that lithium-ion is a transition technology, not a final choice for best of breed. Furthermore, Hellman told me that evolving consensus among OEMs is also saying that Li-ion is not a long-term solution.

If that is true, then why not consider zinc-air? Of course the end drive seems to be toward hydrogen, but that requires an energy source for conversion. Zinc is merely mined like iron.

Furthermore, I noted that lithium’s very limitation in supply in America makes it eventually as dangerous as foreign oil. China has already placed limits on exports of rare earth materials.

Hellman admitted that one feature of zinc-air is still a hurdle, though, but not one that is insurmountable. Fact is, zinc-air batteries do not discharge well under immediate-demand conditions as do lithium-ion batteries. He referred to sudden acceleration conditions. To solve that issue, a high-tech, lead-acid battery is used, much like an ultra capacitor, but at significantly lower cost. Recall my own article on Axion Power with their PbC electrodes which extend the power and range of lead-acid batteries. Read: Axion Power to improve stop-start systems with new PbC battery electrode. Well, this is such an application, aside from the stop-start for IC engines. EOS Energy has its own tech in this area, too.

Mr. Helleman was very cautious in explaining to me that EOS Energy is not in the business nor intends to be in the business of making production auto batteries, but in grid storage; as that is its primary business. However, he also made it clear that the company desires very much to work in 2012 with automotive OEMs and any of its tiered suppliers to co-develop their proprietary and intellectual properties into a viable automotive battery product.

The technology is here; and it’s not rocket science demanding a moon shot. Along with a good weight reduction program for auto bodies, it seems all that’s required to get zinc-air into cars are some people in the auto industry to get their heads together.

Imagine getting a full-sized EV on the road at a cost the masses might finally be able to afford. We can only hope this happens sooner, rather than later.

Aaron Turpen wrote on February 1, 2012 - 10:54pm Permalink
Zinc-air (and other metal-air/metal-oxy fuel cells) are awesome choices to replace batteries. They're lighter weight, don't generally require the toxic chemicals, and infinitely renewable with a longer lifespan and much higher range per pound ratio.