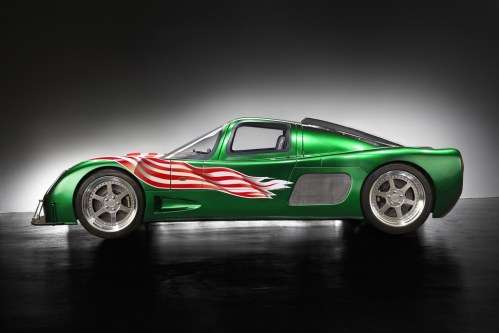 The Maxximus LNG 2000 has the looks of a supercar, but runs on compressed natural gas and liquid natural gas.
Advertisement

The Maxximus LNG 2000 is the second generation of the company’s original supercar, the G-Force, which claims to be “the world’s fastest street-legal supercar.” The LNG 2000 is powered by an all-aluminum V8 that produces in excess of 1,600 hp; in other words, it‘s green and powerful.

Finding this gem was not easy. In news email from NGV America, the newest street-legal supercar project was further linked to coverage via Inhabitat.

Amidst the web research, you may find another car in the works called the Prodigy. It is another LNG vehicle for the consumer market. This one, though, is said to have a 2000-horsepower engine under its hood. The cost? Somewhere in the range of a million-dollars.

According to the bio, Marlon Kirby has vast experience building hot rods and high performance engines over many years for a variety of clients. One of his specialties is building stock spec Ultima GTR’s.

Maxximus Technologies was founded by Kirby in 2000, in Indianapolis, and for a few years, he worked on other people's cars. But Kirby never gave up on the idea of building a car of his own, a car that would show the world his skills as a designer.

On the other hand, Dr. David Bruce McMahan is the President and Chief Executive Officer of the Centaur Performance Group of Companies and is also the Chief Executive Officer of McMahan Securities Co. L.P. He is also a philanthropist. As National Association of Securities Dealers licensed Principal, McMahan is a member of the American Stock Exchange and is a Securities and Exchange Commission registered Broker-Dealer.

The two men met when Kirby was working years ago as a chauffeur, where they discussed their love of fast cars and their shared dream of owning a one-of-a-kind car that was unique, street legal, and a record breaker. The result of that meeting and friendship is here for all to see.

This team of designer and builder has a place in this writer's opinion among the EyesOn Design participants, plus the many awards given at NAIAS. For the record, the next EyesOn Design function will be this month at the Edsel and Eleanor Ford Estate on Lake St. Clair near Detroit.

-----------------------
About the Reporter: After 39 years in the auto industry as a design engineer, Frank Sherosky now trades stocks and writes articles, books and ebooks via authorfrank.com, but may be contacted here by email: [email protected]