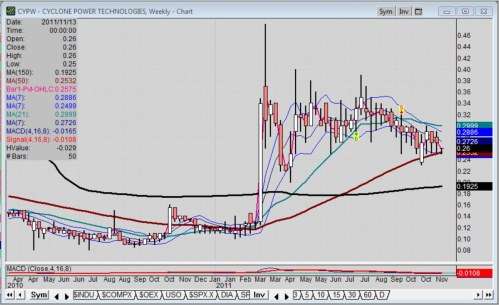 Direct from its headquarters in Pompano Beach, FL, Cyclone Power Technologies (Pink Sheets: CYPW), developer of the all-fuel, clean-tech Cyclone Engine, announced its operational and financial results for the third quarter of 2011.
Advertisement

Lest any Torque News readers doubt why this company deserves our attention, it’s important to realize the external combustion engine has a place, not only as a generator engine, but as part of direct propulsion system for automotive and trucks. Stock traders may refer to the intra-week chart of Cyclone Power Technologies (Pink Sheets: CYPW).

Even by its own statements, Cyclone Power Technologies (Pink Sheets: CYPW) is the developer of the award-winning Cyclone Engine - an all-fuel, clean-tech engine with the power and versatility to run everything from waste energy electric generators and solar thermal systems to cars, trucks and locomotives.

Invented by company founder and CEO Harry Schoell, the patented Cyclone Engine is a eco-friendly external combustion engine, designed to achieve high thermal efficiencies through a compact heat-regenerative process, and to run on virtually any fuel - including bio-diesels, syngas or solar - while emitting fewer greenhouse gases and irritating pollutants into the air.

For the record, the Cyclone Engine was recognized by Popular Science Magazine as the Invention of the Year for 2008, and was presented with the Society of Automotive Engineers' AEI Tech Award in 2006 and 2008. Additionally, Cyclone was recently named Environmental Business of the Year by the Broward County Environmental Protection Department.

Harry Schoell, CEO of Cyclone, commented: "We're very pleased with the progress we've made on our technology thus far in 2011. Thanks in part to the addition of several talented engineers and technicians, hard work and dedication from our leadership team, and strong support from our partners, we have been advancing the development of the Cyclone Engines at a faster pace than ever before. We look forward to continuing this momentum into next year, when we anticipate bringing the first of our products to market."

Commented Christopher Nelson, Cyclone's President: "On the corporate and business side, we've made significant advancements on expanding our production capabilities and ability to manage growth, as well as achieving full financial reporting status with the SEC. We remain focused on fulfilling customer contracts, bringing our engine technology to market, and generating a strong, consistent revenue stream from our operations. We are confident in the future of Cyclone and the ability of our people and technology to accomplish truly great things."

As a result of fulfilling the Renovalia license requirements, the Company recorded revenues of $250,000 in the third quarter of 2011, an increase of 156% over the previous year period. Between the Combilift license and contracts with Raytheon Company and the U.S. Army (through the Company's license with Advent Power Systems), Cyclone has approximately $1.5 million in backlog orders for prototype engines, of which approximately $200,000 has been received already. The balance is expected to be paid to the Company over the following six to nine months.

Operating expenses incurred for the third quarter of 2011 were $878,000, up 54% from the previous year period. The majority of the increase was comprised of the issuance of common stock and options for services, a non-cash event. The Company also has more engineers, mechanics and other employees on its staff, which has almost doubled over the last 12 months. These operating expenses are net of a $184,000 reduction in R&D expenses, which has occurred as the Company allocates more resources to inventory for customers' engines, versus self-financed research activities. Because of these factors, the operating loss for third quarter of 2011 was $777,000, an increase of 58% as compared to the previous year period.

The Company had other income for the third quarter of 2011, which included $48,000 from the adjustment of a derivative liability. The comparable period in 2010 had $531,000 of derivative expenses. While the mark-to-market adjustment of derivative liabilities has no effect on the Company's cash flow or operations, the Company did amend its 2010 and 2009 year-end and 2011 and 2010 second quarter financials to reflect these items. To advise the Company with respect to complicated derivative accounting matters like these, management has engaged an expert in the subject area and has implemented stricter internal control measures.
Overall, the net loss for the third quarter of 2011 was $739,000, down 28% from the previous 2010 period. Net loss per weighted average share was ($0.00), as compared to ($0.01) for the third quarter 2010.

As of September 30, 2011, net working capital deficiency was $2.1 million, down 8% from the previous year. To fund this shortfall over the last nine months, the Company sold 7.7 million shares of common stock and 44,547 shares of Series A Preferred stock for $1.6 million. It also issued 3.3 million shares of common stock and 2.2 million options in order to conserve cash and provide long-term incentives for the Company's employees and service providers.

The Company will be holding its 2011 Open House on December 9, from 9:30am to 12:30pm (EST), at its facility in Pompano Beach, FL. For more information, and to follow developments and news at Cyclone, visit www.Facebook.com/CyclonePowerTechnologies.

Cyclone Power is not an expensive stock by any stretch. In fact, it is still regarded as a penny stock. Still, CYPW is trading just above its 50-week moving average which is above the 150-week or 3-year moving average. That’s bullish by definition.

Question is, is the technology sufficiently viable to garner attention by any larger investment funds? Many investment funds, for the record, will not touch a stock less than $15; others at $8. And that’s what’s needed to propel this stock to greater heights.

Catalysts, however, come in all shapes and sizes. The greatest catalyst right now is the attention by the military and the utility companies. Another question is, is this a budding technology that will one day operate on prime time?

It’s the technology and its potential that has had this reporter’s interest for the past two years. Looking back over 2011, one can see tremendous gains in tech acceptance, especially by the military. Most notable was the statement by Raytheon (NYSE: RTN) that Cyclone Power’s engine is “a game changer.” Read: Raytheon: Cyclone Power's combustion engine game changer

Now, whether this technology every makes it into a car is anyone’s guess. Automakers can’t even decide on natural gas as a propulsion fuel, while they side with expensive lithium-ion electrification. Still, the CYPW technology is viable; and the opportunity to invest is certainly cheap enough, but there is high risk. In other words, this is a speculative stock.

From the stock fundamentals viewpoint, Cyclone Power Technologies appears to be stepping up to the plate, especially with its achievement of fully-reporting status with the SEC under the Securities Exchange Act of 1934.

Toyota vs Tesla: Which Stock To Buy These Days
For Some Former Daimler Managers Daimler Is Authority, While Tesla Is Like a Startup
END_OF_DOCUMENT_TOKEN_TO_BE_REPLACED