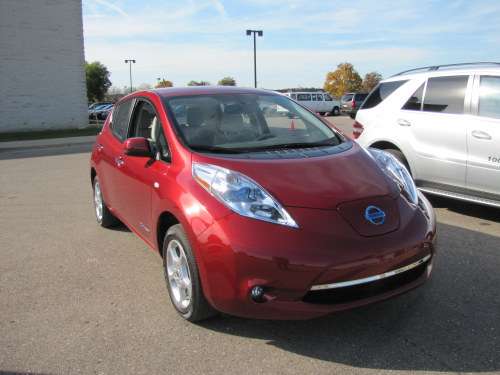 John Hipchen, who has blogged about his experience of buying and owning a new Nissan Leaf on the coppertalk blog on behalf of the Copper Development Association (CDA), also addressed how to buy an electric car.
Advertisement

John Hipchen doesn’t necessarily think of himself as a pioneer. But when it comes to buying an electric vehicle, like the rest of us, he’s a consumer in a new world. So, his blogging about his experience of buying and owning a Nissan Leaf on the coppertalk blog on behalf of the Copper Development Association, makes for a refreshing form of PR.

Furthermore, the blog comments literally addressed how to buy an electric car, which many consumers not familiar with automotive electrification find confusing. Even a Detroit News column last Fall revealed as much when it pointed toward a Ford Motor Company study, which indicated that while 61 percent of consumers are interested in buying a hybrid or electric vehicle, only 4 percent actually do; and that nearly half of consumers don’t know the difference between a plug-in hybrid and an electric vehicle.

Hipchen began the purchase process last year and blogged about his EV adventure in coppertalk, the CDA blog. A former chemist, and now a technical marketing consultant for the Exel Consulting Group based in Palatine, Ill., Hipchen, 55, became an official l Nissan LEAF owner last month.

“Rising fuel costs are not only impacting our economy, but also the way we live,” Hipchen says in a blog entry. “As a big believer in human ingenuity, I am willing and even anxious to change my lifestyle in exchange for efficiency, a better environment and lower costs.”

According to the CDA news release, a series of blog entries by Hipchen also covered questions all consumers might want to seriously consider when purchasing an EV, such as the following:

1) What are my driving habits?
2) How much do I pay for gasoline?
2) Will my home accommodate an EV charging station?
3) What are the features of the EV and how much will it cost?
4) Is there infrastructure for charging stations in my geographic area?

“I learned about electric and insurance rates and all the variables -- it’s important for consumers to analyze the economics in detail before they make a purchase,” Hipchen wrote. “If the economics work, we’ll likely see the purchase of EVs exceed expectations.”

Of course, the Copper Development Association (CDA) makes no apologies for inviting Hipchen to use their site as a symbiotic sounding board. Fact is, copper is a key component in EVs.

Furthermore, copper is a key resource for both the electric car and the infrastructure that makes them run. The average IC engine car produced in North America, for example, already has 50-55 pounds of copper in it. In a hybrid vehicle, the amount will double. In a pure electric car, the amount of copper will triple.

“Although EVs and hybrid vehicles don’t yet have wide consumer appeal, the emerging technology is good for the environment and the economy,” says Bob Weed, CDA vice president OEM.

“Even if EVs are only a small percentage of the market so far, there now are fewer cars burning gasoline and releasing tailpipe emissions,” Weed says. “The copper industry is pleased to be an important part of this energy technology.”

1) More than two-thirds of the copper will be found in car’s wiring harness and electrical components.
2) Copper has the highest conductivity of any metal that can be practically used for conveying electricity.
3) Each year in the U.S., nearly as much copper is recovered from recycled material as is derived from newly mined ore.

About the Copper Development Association

The Copper Development Association Inc. is the market development, engineering and information services arm of the copper industry, chartered to enhance and expand markets for copper and its alloys in North America.