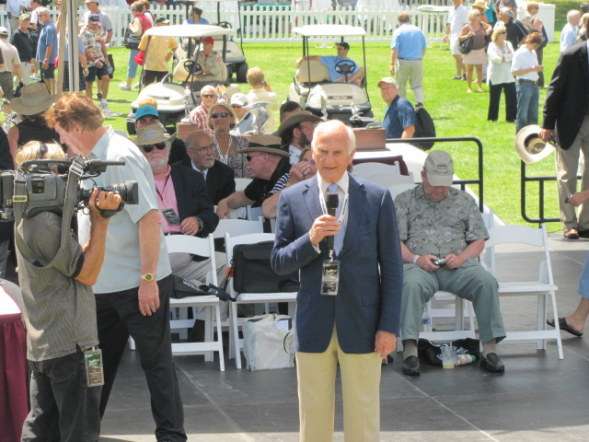 The Concours d’Elegance of America at St. John’s (formerly held at Meadow Brook Hall north of Detroit) has announced the creation of a new Designer Tribute Class, which in 2011 will be dedicated to the lifelong work of Charles M. “Chuck” Jordan
Advertisement

This is the first designer class in history for the event.

Charles M. “Chuck” Jordan shown in the photo at last Concours at Meadowbrook, retired as General Motors Design Vice President in 1992 and passed away December 13, 2010 at the age of 83.

According to the media release, the 2011 Concours d’Elegance of America at St. John’s is inviting a very limited number of nominations of fine Concours-quality examples of GM products and others known to be designed or strongly influenced by the late Chuck Jordan.

If you know of a fine example of one of these vehicles, you are asked to visit their website at ConcoursUSA.org

Chuck Jordan started his GM career in 1949. Nine years later he was promoted to Cadillac Chief Designer, where he influenced the design of the monster-finned 1959 Cadillac, then toned down the 1960 models to what many feel is a more tasteful level of tail-finned opulence.

By 1962, Jordan was promoted to Chief Designer over all GM Exterior Design. In 1967 he relocated to Germany to lead design of GM of Europe’s Opel brand. Three years later, Jordan returned to the U.S. as Director of Design, the highly influential number two position under then Design Vice President William L. Mitchell and Mitchell’s successor, Irv Rybicki.

When Rybicki retired in 1986, Jordan succeeded him as Vice President, General Motors Design.

A passionate design leader, Jordan had either direct involvement or strong influence over a wide variety of General Motors design concepts and production vehicles ranging from those iconic 1960s Cadillacs to the stunning 1966 Oldsmobile Toronado and Buick Riviera and 1967 Cadillac Eldorado and many Chevrolet Corvette sports cars.

In more recent years, he guided designs of the handsome ’91 Buick Riviera, the ‘92 Cadillac Seville and Eldorado, the ’93 Chevrolet Camaro and Pontiac Firebird and the ‘95 Buick Riviera coupe and Olds Aurora sedan.