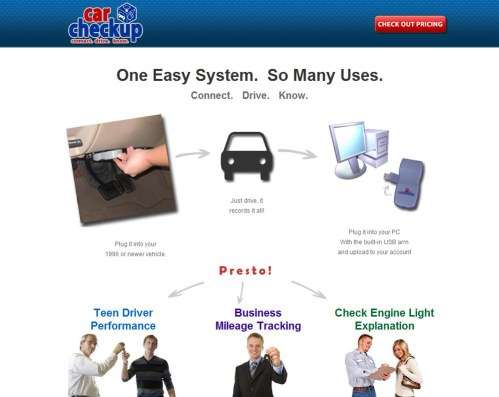 Thanks to a unique plug-in product called CarCheckup, you now have access to all that on-board diagnostics (OBD) data that was once available only to professional mechanics, but with the added benefit of recording trip information.
Advertisement

Imagine trip information from the same access point, your OBDII port under your car’s dash.

When CarCheckup first offered me a unit to review via its DittoePR rep, Jim Hoff, I admit I was a bit skeptical. After all, I had already reviewed a competitor, but more from a news release perspective.

For the record, I was not paid for this review, and the unit is being shipped back. That freed me up to ask, how different is this product than other brands, like CarMD and CarChip Pro, for example?

For those who want to listen to this product review, here's my video:

Fact is, I found CarCheckup does much more than just read engine codes. It reads and stores data from your car's on-board computers, continuously logging driving and engine performance, much like a "black box" records the flap angle and engine speed in a commercial airplane.

Once I received the latest CarCheckup automotive scanner and data logger in the mail, I was immediately impressed with light weight and the small size, literally fitting into the palm of my hand; plus the unit had no buttons, dials or switches.

I then read the tri-folded quick-start guide (much to my wife's surprise), but had to put the project on hold as my writing agenda was quite busy that day and getting ready for Autorama. A week later I was finally free and plugged it into my Chevy HHR. Point is, it was that easy!

My first impression of the product was good

However, knowing what I know about surface mount devices or SMD electronic components, I think it could even be made smaller. There was no need for an extra-long cable for attachment, although I would understand a need for some vehicle applications that wanted to hide it inside the dash.

One outstanding feature for me was the swivel USB plug that positions out of the way while recording, but swings out for easy attachment into the USB port of my computer for data extraction. It negates the need for an intermediary cable. Still, that may be a pain for those with their USB located in the rear of the computer, but my HP has two USB ports in front for convenience.

When connected to the vehicle, though, the connector is made robust enough so the unit supports its own weight. Fact is, the unit is very light.

Tested on my Chevy HHR

For my HHR, I was concerned that the unit would be in the way in the left-knee bolster area. Truth is, I never once bumped it while driving; and I had the unit installed for over a week. Still, smaller is better, especially for fleet and long-term applications.

I drove the car as normal, as did my wife on occasion, with the device plugged in the entire time; and the temperature in Michigan was well below freezing.

Although I kept it plugged in overnight, I learned later that it is not necessary, because the data will be logged separately each time you stop and restart your vehicle. The only caution is to make sure you don’t unplug it until you see a green light; as a red light means the unit is reading and writing.

Now comes the part where I had to export the data into a usable and readable format. After logging mileage for about a week, I unplugged the device from my HHR. Then I plugged directly it into my computer by swinging out the USB plug on the device and into the USB port on my computer port.

Much to my surprise, my computer which runs Windows 7 (64 bit) instantly installed the drivers. So, no additional software was needed, which I found convenient.

I then logged into the carcheckup.com website and proceeded to register for an account. That took longer that the whole process of log-in, which took only a few minutes, and required me to select a primary vehicle for the device. Unfortunately, my HHR was not on the list, so I had to request it be added.

After the setup was completed and I logged back into the system, I was met by a nice dashboard screen with some options to choose from. I selected the download data tab and it took about 5-10 minutes to retrieve the data that I had recorded into the device.

I found Trip Summaries as the greatest purpose for this product: Think Highest Speed, RPM, Extreme Braking, and more! It even reports trip time, miles traveled, the highest attained speed, plus the time spent at various speeds. That in my mind is probably its greatest asset next to code reading; and a feature CarMD does not have.

One area that fits the life of parents with a teen driver is the Hard Driving indicator, which spells out the number of hard accelerations, extreme accelerations, hard brake events and extreme brake events, over and above fastest speed.

While each of these functions plus a few others can be graphed, only an engineer could appreciate the angle of the throttle, for example.

Frankly, when it comes to distance, I would prefer a GPS location as well; as distance doesn’t tell exactly where my kid drove for the evening, or my sales/service rep drove for the day. But that’s one dad’s opinion who now enjoys grandchildren.

Still, every car owner can at the very least can still use the Trouble Code readout, especially when that ‘CHECK ENGINE SOON’ light comes on. Question awlays is, how soon? In my case, my HHR was running fine; so no codes were indicated.

According to the website, the system does allow for an explanation and information in the form of two separate reads: present codes and pending codes. With that information you would be well armed so as not to be lied to by a service technician.

Although the Internal Revenue Service (IRS) allows you to deduct mileage on your personal vehicle under certain circumstances, truth is estimates don’t always cut it, especially in an audit where record count best. Imagine giving a challenging IRS agent your backup data and watching his or her face go numb.

As a retired design engineer, I play no games and do not pull punches when it comes to auto product reviews. That’s simply my style, and those who send me their products must understand that.

The CarCheckup product, though, is a usable device, in my opinion; and more so as trip recorder than a code reader.

With that stated, aside from the mileage records and the throttle angle data, I believe my own usage would be served best as a monitoring device for my car’s condition. And for those who buy and sell used cars from the public, the $25 fee for each new car would be a negative, but there is no limit as with other devices.

The cost of $149.97 includes free shipping and is comparable to the CarMD device at $119 plus S&H, but more expensive than the CarChip Pro at $99 plus S&H.

CarCheckup includes one year of service and may seem a bit high, but you‘re buying more than a recorder here. You’re buying access to their database.

Again, for an additional car, you need to add $25, plus you’ll have to add $19 more for an extension cable if you need one. Frankly, the integrated USB negates the need, except if you want to hide the device inside the knee bolster.

Nevertheless, whether you run a business and need to record mileage, or you’re buying a used vehicle, or you simply need a service code to be interpreted, the product has value to every car owner.

With all respect to this brand, though, my main concern with any of these new plug-in devices is, the lack of expediency when a default code pops up. For example, I prefer the code to be interpreted right away, not later when I get home and get access to my computer. I already know I have a fault; my car already told me. Point is, tell me what I don’t know and do it right away when I‘m on the road. That’s just my personal perspective.

So, my vision for the future of this technology is to have the car tell me that information directly, without having to purchase separate interpreting devices. Considering the cost of cars today, it’s the least automakers can do. Are you listening, Detroit?

For those earlier models, though, which do not have that level of capability to communicate, the product does all that it proposes.

But, as a mileage recorder, I find this CarCheckup device with a reporting format that can be downloaded to an Excel file to be highly useful for business travel records.

Update per DittoePR, Jim Hoff: As CarCheckup allows for use on one vehicle and additional vehicles for $25 each, CarMD by comparison only allows 3 car profiles per account and only 6 reports per those months. With CarCheckup, you can use 2,3,4 or 5 vehicles on one device, how ever many you want; but for the $25 subscription per vehicle. You also have no limit to the number of reports you can run per month.