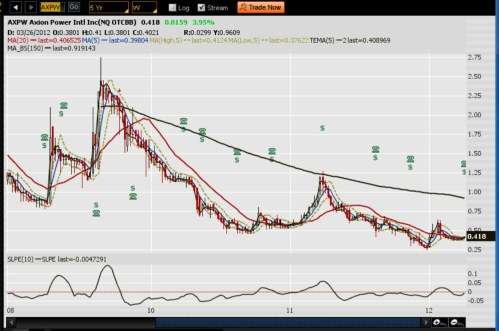 Subsequent to year-end, on February 3, 2012, Axion completed a registered-direct offering of common stock that provided $8.6 million of new financing that will be used for working capital and for general corporate purposes. It is important to keep this new financing in mind when studying the financial statements for December 31, 2011.

While Axion Power International, Inc. (OTCBB: AXPW) has developed and patented a next generation energy storage device that won the prestigious Frost & Sullivan Technology Award for North America in the field of lead-acid batteries, it is clear that Axion's new PbC® batteries have "the potential to revitalize the lead-acid battery industry by breathing new life into an established technology that is not well suited to the requirements of important new applications like hybrid electric vehicles and renewable power."

Unfortunately, the latest news release about year-end results for 2011 indicates that results have yet to create a profitable situation. Axion Power, the developer of advanced lead-carbon PbC® batteries and energy storage systems, today announced results for its fourth quarter and year ended December 31, 2011.

Net product sales increased to $7.6 million in 2011 from $1.3 million in 2010. Net product sales increased in 2011 compared to 2010 primarily due to the sale of $ 6.4 million of specialty lead-acid batteries to a single customer who will sell these batteries under their brand, as well as carry the cost of inventory and provide the raw materials for production of these batteries.

During 2011 there were important sales of PbC batteries, most notably to Norfolk Southern (NS), one of the nation's largest class-A railroads. The Norfolk Southern batteries were accepted and are being used for large string platform testing for battery-powered locomotives. Axion has had a program with NS since the Fall of 2009 and believes it is one of the very few advanced battery companies in the world that has an initiative designed to provide a major rail company a "clean, green" energy storage solution for their hybrid locomotive initiative.

Also during 2011, Axion Power celebrated its first connection to the huge PJM electric power grid for saving and storing electricity. Axion provided a 0.5MW PowerCube™ ("CUBE") that was connected into the PJM network this past December. Initial use of our Cube will be for the frequency regulation market via demand response and curtailment, but the Cube has broad application beyond this use. Subsequent to year end the Company announced a contract for a Zero energy building in the United States Washington Naval Yard. Axion believes the potential for micro-storage applications on the US electric grid is very large and that the opportunity exists on both sides of the meter.

The hybrid vehicle market continues to be a major focus for Axion, and during 2011 studies and demonstrations continued with European and US automakers, primarily in the stop/start application for the micro-hybrid vehicles market. Axion feels that the PbC battery, because of its large charge acceptance and fast recharge capabilities, can offer a low cost solution for operating the ancillary load (i.e. hotel load) in the micro-hybrid platform.

Chairman & CEO Thomas Granville commented, "Although the road has been longer than we anticipated, we are finding the market opportunities for our PbC product applications are larger and more diverse than we had initially forecast. The industries we are working with include the U.S. military, the electrical generation industry, vehicle manufacturers and railroads – each of them well known for having long decision cycles and difficult, demanding requirements. So far we have passed all the hurdles and made excellent progress in each of these markets, even as other, more exotic and more highly publicized battery chemistries, and battery companies, have fallen by the wayside.”

"We believe that our PbC batteries will be one of the ultimate winners in the contest for new energy storage technologies. Our batteries have unique properties that include a very high rate of charge acceptance and fast recharge capabilities. The PbC batteries are a fraction of the cost of more exotic chemistries. The PbC battery can be manufactured in existing factories in normal manufacturing environments (not clean rooms). They provide superior performance in all weather conditions, unlike competitive products. PbC batteries are completely recyclable and they don't require high-cost, low-availability raw materials. We have every faith in PbC technology, and strong belief in our extraordinary and hard-working Axion team."

From a trader's viewpoint, this writer thinks this is a super-cheap stock, literally a penny stock. It's highest price in the past five years has been $2.75. Presently it trades for less than fifty cents. So, you have to believe in its future to invest.

Frankly, I find the PbC technology for its electrodes quite appealing. So, any investment at this point has to be considered like a long-term call option. It may die on the vine; or it may explode upward, especially if stop-start gets a big hold on the auto industry.

Face it, lithium-based batteries are very expensive. This technology has the potential to give lithium a run for its money, especially for small-segment vehicles where the margins are tight. With the high cost of EVs, I think the ICE engine will not die anytime soon; but that does not mean some electrification is not warranted. In this case, stop-start witha low-cost PbC battery instead of a Li-Ion battery is a situation to watch; and Axion Power looks to be at the center of the action. Question is: Will it become a buyout candidate in 2012?

For the record, I sold my shares some time back, but now think the advent of more stop-start vehicles could be the spark that might cause me to get back in. After all, the recent lows look like a bottoming phase; and the fundamental story seems more viable than before.

siliconhillbilly wrote on April 3, 2012 - 12:49pm Permalink
Nice job on the Axion story. You seem to have a realistic handle on the up side possibilities as well as the risks. Personally, I think the near term sales (next 12 months) for Axion will be in the PowerCube market with "electric railroad" being a close follower. Significant auto sales most likely won't start until 2013, at the earliest. Again, nice, concise article.