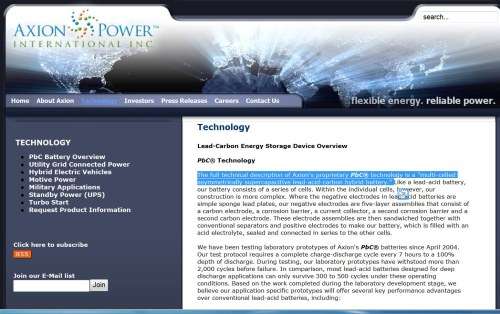 Talk about welcome news to those who cannot afford the high prices of EVs and full hybrids. Micro-hybrids will now have a more cost-effective solution powered by Axion Power’s PbC® Battery.
Advertisement

Axion Power International Inc. (OTC Bulletin Board: AXPW), the developer of advanced lead­-carbon PbC® batteries and energy storage systems, announced today that it has been awarded a $150,000 grant from the U.S. Department of Energy (DOE) to fund a commercialization plan for the use of its PbC batteries in a "low-cost, high-efficiency" dual battery architecture for micro-hybrid vehicles.

Wait, there’s more. According to the news release, this initial $150,000 can lead to a larger award; and in this reporter’s opinion, would be well worth the investment simply because it would benefit more car owners than present electrification allows.

For the record, I have been reporting here at Torque News that micro-hybrid vehicles may well be on their way to becoming the most common type of automotive vehicle. Read Stop-start technology to advance more micro hybrids by 2016. The news release stated that the estimated market size is 25 million by 2016.

Next generation micro-hybrid vehicles will, and in some cases already do, include added features such as regenerative braking. This is called "sailing" whereby the engine is turned off as the vehicle slows or coasts below a pre-determined speed. and perhaps some form of battery assist to the initial vehicle acceleration.

Realize this does not have to involve expensive lithium in any way. In fact, engineers and automakers realize that lead acid batteries (LAB) are the most cost-effective way to handle the stop-start engagement. Problem is, present lead-acid battery technology is not designed to suitably provide the dual function required in today's micro-hybrid vehicles, let alone handle the added loads of future micro-hybrid vehicles; but this is where Axion‘s PbC® technology comes in.

While the dual feature includes the battery working with the alternator generator to start and power the vehicle while the engine is on, fact is, LAB is good at this. However, when separately powering the vehicle's ancillary load when the engine is off, present LAB technology is very poor.

The LAB's shortcomings with respect to powering the ancillary load are directly attributable to the battery's rapid decline in charge acceptance over time due to sulfation. This occurs in the LAB after just a few months of usage. The PbC battery, on the other hand, has been proven to quickly accept full system charge (i.e. no loss of charge acceptance) for more than 5 years of usage. This advantage translates into much greater "engine off" time resulting in much greater fuel economy with significantly reduced CO2 emissions. Both of these features are important goals of automotive OEM's and of political leaders in the countries where they manufacture vehicles.

Meeting the Increasing Energy Demands of the Automobile

As more and more demands are placed on batteries for hybrid vehicles (such as those enumerated above), demands that require a significant amount of partial state of charge operation by the battery, a dual battery approach seems to offer the most efficient solution. Since the lead acid battery fails to be an adequate solution where charge acceptance/fast rate of re-charge is required, LAB's are not the answer to the dual battery approach. What Axion feels is the answer, and what the above award is designed to demonstrate, is that the PbC battery and PbC technology, will provide a cost effective solution to at least part, if not all, of the dual battery proposition

According to the news release, this grant, from the DOE Small Business Innovation Research program was merely for the maximum allocation under Phase I; so it is merely the first step in the DOE grant approval process that could lead to significantly larger awards in future Phases of the program, said Axion Power CEO Thomas Granville. The award of the grant for Phase I enables Axion to apply for Phase II awards, which will be much larger, $1M or more.

Successful completion of Phase II automatically qualifies an awardee to apply for additional DOE funding beyond the SBIR program. The Phase III funding provisions do not contain predetermined award limits.

"This is a very important grant for Axion Power, not just for the financial assistance being provided, but for the acknowledgement by the DOE of the potential benefits of our PbC technology in new and innovative constructs and designs," Granville said. "Our technology is ideal for the new world of environmentally friendly, technologically advanced automotive vehicles. Our PbC batteries test out at a consistent high rate of charge acceptance for upwards of 5 years of usage. PbC's can be recharged quickly, have a proven safety record and are 100 percent recyclable - unlike some of the more exotic chemistries like lithium-ion batteries. We look forward to working closely with the DOE to demonstrate different potential applications that our PbC batteries offer for the hybrid and micro-hybrid markets."

Axion Power was one of 75 companies out of a total of 764 applicants to earn an award in the first phase of the DOE's program. Grant funding is expected to be available to Axion Power by late June of this year and Phase I will conclude 10 months from that date. According to DOE documents, Phase II awards will be granted to approximately 50% of Phase I awardees and will conclude in 12-15 months. Phase III will follow shortly thereafter.

For another Torque News look at the Axion technology, read: Axion Power and Norfolk Southern pointing the way with advanced carbon electrodes

Axion has developed and patented a next generation energy storage device that won the prestigious Frost & Sullivan Technology Award for North America in the field of lead-acid batteries. According to Frost & Sullivan, Axion's new PbC® batteries have "the potential to revitalize the lead-acid battery industry by breathing new life into an established technology that is not well suited to the requirements of important new applications like hybrid electric vehicles and renewable power."

Axion Power International Inc is the industry leader in the field of lead-acid-carbon energy storage technologies. Axion believes this new battery technology is the only class of advanced battery that can be assembled on existing lead-acid battery production lines throughout the world utilizing Axion's proprietary carbon electrodes. Axion's future goal, after filling their plant's lead-carbon battery production capacity, is to become the leading supplier of carbon electrode assemblies for the global lead-acid battery industry.

LG's New EV Battery Plant Is a Welcome News for Tesla
Tesla Giga Berlin's New Hurdle: It's Not Only the Gov't, but Now Tesla Itself
END_OF_DOCUMENT_TOKEN_TO_BE_REPLACED