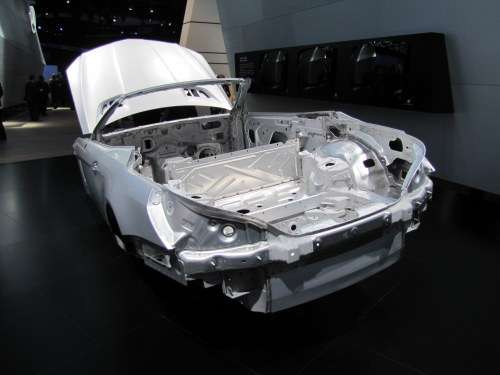 Auto industry behind 8-ball by choice with lighter auto bodies

While Bob Lutz writes ranting op-ed pieces at Forbes against so-called, right-wing Volt bashers, the auto industry sits there like a bump on a log, still behind in achieving the weight reductions via aluminum body structures necessary to make both EVs and IC engine cars fully efficient.
Advertisement

Bob Lutz has the right to say that Volt bashing by right wingers is harming American workers. However, he misses the point that failure on the part of the industry to act on the behalf of all its customers isn’t helping either. And one area that he misses, centers not on propulsions, but on the lack of large (yes, large) lightweight body structures, which would avail more jobs, greater efficiency for all auto lines and help the energy reduction.

I strongly suggest Mr. Lutz especially remind himself how much effort it takes to be able to afford an automobile today. He may have earned every dollar he ever made, but he may have forgotten what is really important to customers - affordability; and right now, the EV is very far from that goal. And smaller cars are not what Americans want, although they are paying dearly for it anyway.

He may also applaud the Volt propulsion technology, as do I for example, but he is constantly missing the point when government (read taxpayer) money has to be used to support sales. While I have mostly been a supporting fan of Mr. Lutz, I wish he would expend that mouth energy toward something that would really make a difference, like low-cost, lightweight body structures.

Anyone with a rational mind knows the auto industry is expending serious sums of money on propulsion technologies like the Volt, when it should be spending at least as much on the next wave of auto bodies. Why? Weight reduction is where the problems really reside. It is public enemy #1 of both the EV and the IC engine automobile; and Lutz knows that..

I agree with Lutz on one point: It gets sickening after a while; you know, all the side comments about how inefficient the IC engine cars are while the EVs are too damned expensive for the average driver; and I admit that I'm one of them speaking out. Truth is, both comments are right, but not for a lack of technological advancements.

The EV has surely come a long way from barely getting much attention to getting greater acceptance, so much that they are no longer on special displays at the 2012 NAIAS. And the downsizing of IC engines with turbos is making a statement; albeit still not enough to reach that 54.5 MPG by 2025.

When it comes to cost, though, the choice of lithium is not a slam dunk either. First, it is limited in supply; there is very little, if any, in America. Most of the supply is in Bolivia; and China has been courting the Bolivians to secure supplies for their needs; and they have gold to pay for it, while we have Bernanke dollars.

We need a cheaper battery like zinc-air. Yet, Lutz never ever mentions that. He touts HCCI a bit, but seems hopelessly lost when it comes to discussing split-cycle engines with any knowledge. I asked him that very question in December on the phone at a call-in show, and he dodged the question. The when I wanted to clarify the question at NAIAS in Detroit, he didn’t have time; OK, he’s a busy man.

Now back to body structures. Forcing people into smaller cars is not my idea of advancement. At least when I spoke with a Ford engineering manager at 2012 NAIAS about the limits of downsizing engines, he noted the next wave of gains for automotive will have to come from lighter body structures. Now, while he negated split cycle engines, at least he had a valid point.

Fact is, auto body structures today are becoming hybridized in their own rite. They are made mostly of sheet steel stamped in complex forms, then welded together for that unibody construction. They are getting increasingly amount of aluminum and magnesium pieces, too, especially for the unsprung portions like suspension parts.

Look at the Tesla Model S, for example. Also look at the Mercedes new SL. That’s where we need to go as an industry. Both have all-aluminum structures. Cost more money? Sure. So do lithium-ion batteries.

See, if we had an all-aluminum Chevy Cruze, for example, a revised Ecotec engine with split-cycle configuration or even a downsized engine with an electric supercharger, stop-start and maybe even an air-hybrid component, the gas mileage would be awesome compared to what we have now even in the city; and the overall cost wouldn’t be formidable for the masses as what we have for EVs.

I fully realize the expense to change the processing at auto plants is a major task. But realize this: aluminum body construction is still not rocket science; and the body design engineers along with the body manufacturing engineers are really smart and capable people.

Why has there been no revolution in auto bodies at GM, Ford, Toyota? They think it will cost too much; and won’t do it until they run out of other options. In the meantime, IC engines cars still suffer for lack of meeting efficiency goals, and EVs suffer for lack of energy density that results in a lack of driving range that all can afford.

So, if there was ever a time when we needed the mouth of a Mr. Lutz, it is in this area of lightweight body structures, not just expensive EVs and hybrids as halo cars. I would also like to see him start speaking for the industry and maybe against the industry for a change on our behalf, not just his personal projects that are always tied to GM.