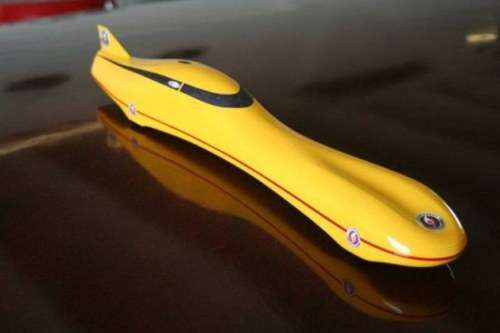 The USLSR Streamliner model shown on the website is surely sleak enough. The world speed record attempt by "Team Steam" will thus challenge a record set in 2009 by the British "Team Inspiration" at 148mph.

Fact is, Aero Tec Laboratories Inc. (ATL) is the world's oldest and largest producer of safety fuel cells for race cars, and has become an active sponsor of Team Steam in its attempt to break the world speed record for steam-powered vehicles.

"ATL is a big supporter of racing and LSR teams," stated David H. Dack, the company's Vice President of Sales. "With the Cyclone-Williams vehicle and Team Steam, we are also supporting new technology with important environmental benefits, including true fuel flexibility. This is a goal that fits well with our broad line of robust fuel cells."

Invented by company founder and CEO Harry Schoell, the patented Cyclone Engine is a modern day steam engine, ingeniously designed to achieve high thermal efficiencies through a compact heat-regenerative process, and to run on virtually any fuel - including bio-diesels, syngas or solar - while emitting fewer greenhouse gases and irritating pollutants into the air.

Currently in its late stages of development, the Cyclone Engine was recognized by Popular Science Magazine as the Invention of the Year for 2008, and was presented with the Society of Automotive Engineers' AEI Tech Award in 2006 and 2008.